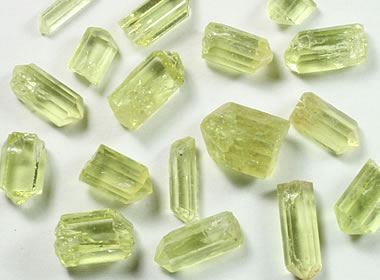 Apatite Crystals: A scatter of small greenish yellow apatite crystals from Cerro del Mercado, Durango, Mexico. These hexagonal crystals are small, mostly about 8 millimeters in length. Apatite crystals of this clarity are not often found in large sizes. Image copyright by Geology.com.

Apatite is the name of a group of phosphate minerals with similar chemical compositions and physical properties. They are an important constituent of phosphorite, a rock mined for its phosphorus content and used to make fertilizers, acids, and chemicals. Apatite has a relatively consistent hardness and serves as the index mineral for a hardness of five in the Mohs Hardness Scale. Specimens with excellent clarity and color are sometimes cut as faceted gemstones. Those with good color and translucence are cut as cabochons.

Apatite is best known for its use as an index mineral with a hardness of 5 in the Mohs Hardness Scale. It is usually green in color, but can be yellow, brown, blue, purple, pink, or colorless. These colors are often so vivid that apatite has frequently been cut as a gemstone. Apatite is a brittle material. It breaks by both fracture and cleavage, but the cleavage is generally indistinct. Hexagonal apatite crystals are sometimes found in igneous and metamorphic rocks. 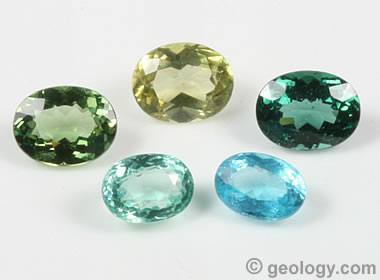 Apatite forms under a wide variety of conditions and is found in igneous, metamorphic, and sedimentary rocks. The most important deposits of apatite are in sedimentary rocks formed in marine and lacustrine environments. There, phosphatic organic debris (such as bones, teeth, scales, and fecal material) had accumulated and was mineralized during diagenesis. Some of these deposits contain enough phosphorus that they can be mined and used to produce fertilizers and chemical products.

Apatite occasionally occurs as well-formed hexagonal crystals in hydrothermal veins and pegmatite pockets. These crystals often have a very high clarity and a vivid color and have been cut into gems for collectors. Mineral collectors also enjoy these well-formed apatite crystals, and the prices paid for them often exceeds their value as gem rough. 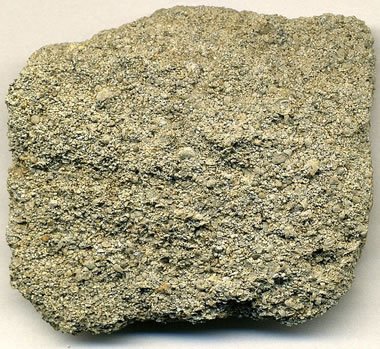 Phosphate rock from the Upper Zhujiaqing Formation of the Yunnan Province of Southwestern China with a fossiliferous peloidal texture. Photograph by James St. John, used here under a Creative Commons License.

Phosphate rock and phosphorite are names used for sedimentary rocks that contain at least 15% to 20% phosphate on the basis of weight. The phosphorous content in these rocks is mainly derived from the presence of apatite minerals. Determining which apatite-group minerals are contained in the rock cannot be determined without laboratory testing because their particle sizes are so small.

Most phosphate rock has a non-detrital origin similar to limestone. Some of the phosphate is deposited by precipitation from solution; some is the remains and waste products of organisms; and, some is deposited by groundwater during diagenesis.

Like limestone, phosphate rock is deposited in sedimentary basins where the influx of detrital material is relatively low. That allows the phosphate to accumulate with very little dilution from other materials. Where the dilution rate is high, phosphatic shales, mudstones, limestones, and sandstones will form instead of phosphate rock. 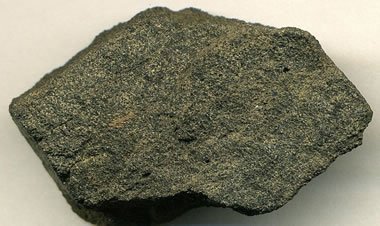 Phosphate rock from the Simplot Mine, Phosphoria Formation of southeastern Idaho, with a peloidal texture. Photograph by James St. John, used here under a Creative Commons License.

Uses of Apatite as Phosphate Rock

Phosphate rock is the only material that can be used to produce enough fertilizer to satisfy world demand. Without it, farmers would not be able to produce enough food to feed the world's population. It is surprising that one type of rock, a rock that most people know nothing about, is so important to keeping the world fed and alive. 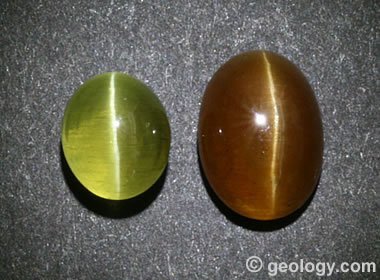 Transparent specimens of apatite with vivid green, blue, yellow, or pink color and excellent clarity are often cut into faceted gemstones. Some stones are heat treated to improve their color.

Attractive translucent stones of excellent color are cut en cabochon. Rarely, translucent apatite contains a fine silk of parallel rutile crystals. When cut en cabochon with the silk oriented parallel to the bottom of the stone, these specimens will often exhibit a chatoyance known as "cat's eye."

As a gemstone, apatite is more popular with gem collectors than it is with jewelry buyers. The mineral has a Mohs hardness of 5, breaks with parting, and is very brittle. These characteristics make it too fragile for use in most types of jewelry.