A pink color-variety of the mineral quartz. 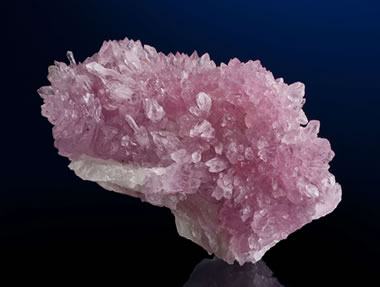 Rose Quartz: A rare specimen of rose quartz with a gemmy pink color and recognizable crystals. From the Sapucaia Mine, Minas Gerais, Brazil. The specimen is 11.5 x 7 x 4.5 centimeters in size. Specimen and photo by Arkenstone / www.iRocks.com.

What is Rose Quartz?

Rose quartz is the name used for pink specimens of the mineral quartz. It is abundant, common, and found in large quantities at numerous locations around the world. It is usually occurs as massive, anhedral occurrences in hydrothermal veins and pegmatites.

The pink color of rose quartz is attributed to microscopic inclusions of a pink variety of the mineral dumortierite. These inclusions are usually abundant enough to make the rose quartz translucent instead of transparent. [1]

Rarely, quartz occurs as transparent euhedral crystals with a pink color. These are usually late-stage mineralizations in pegmatite pockets. The color of these specimens, especially those that are transparent, is thought to be caused by irradiation-induced color centers. This color is often unstable, fading with exposure to heat or light. Pink transparent quartz is rare, but found in several locations around the world. Many people believe that pink transparent quartz should be called "pink quartz" instead of "rose quartz" because the cause of the color is different. [1] 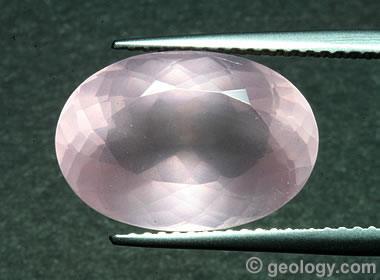 Faceted Rose Quartz: A faceted specimen of rose quartz cut from rough mined in South Africa. This stone was cut as an oval facet of about 15.09 x 10.44 millimeters and weighs about 7.42 carats.

The pink color of rose quartz ranges from a very light, almost imperceptible pink, to a rich translucent pink. It is usually cut into cabochons, beads, and faceted stones of about eight millimeters in size or larger to display the rich pink color.

Some specimens of rose quartz contain a dense network of fine inclusions that align with the gem’s crystal structure. If a cabochon is cut so that its base is perpendicular to the c-axis of the quartz crystal, the cabochon might display asterism in the form of a six-ray star. The best star stones have a vivid pink color and a distinct, symmetrical, and well-centered star. 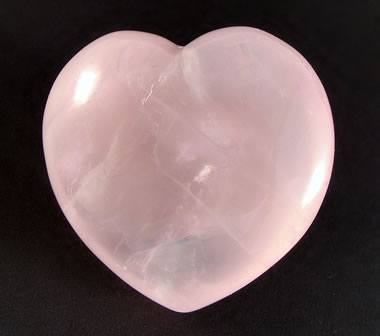 Rose Quartz Heart: A favorite lapidary project is making puffed hearts from rose quartz. They are made by starting with a thick slab of rose quartz and cutting it in the outline of a heart. It is then domed, like a cabochon, on both sides. This gives it a three dimensional shape known as a "puffed heart". They are an easy project for lapidarists with minimal experience and popular as pendants, palm stones and tokens. Image by Ra'ike, used here under a GNU Free Document License. 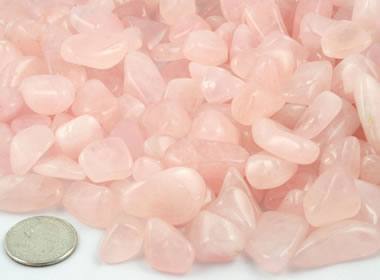 Tumble-Polished Rose Quartz: Tumbled stones made from rose quartz mined in Namibia. Rose quartz is one of the most popular tumbled stones because of its attractive pink color. Image provided by RockTumbler.com.

Rose quartz is one of the most commonly encountered lapidary materials. It is abundant, usually inexpensive, and popular as tumbled stones, beads, and cabochons. These have the richest color when pieces are at least a centimeter in diameter or thickness because of the material’s weak color. With a hardness of 7 on the Mohs scale and a lack of cleavage, rose quartz is durable enough for use in any type of jewelry.

Faceted rose quartz is rarely seen because transparent pink quartz is rare, and translucent rose quartz does not compete well with other faceted materials. Although rose quartz cabochons are popular in craft jewelry, rose quartz is seen far less often in commercial or designer jewelry. Its pink color does not contrast strongly with metal settings or the skin color of many people. Faceted gems such as pink sapphire, morganite, rhodolite, spinel, and tourmaline are used instead of pink quartz, probably because of their superior clarity and brighter luster.

Pieces of rose quartz up to a few pounds in size with nice color are usually available and relatively inexpensive. For that reason it is commonly used to produce small sculptures, puffed hearts, spheres, and utility items. 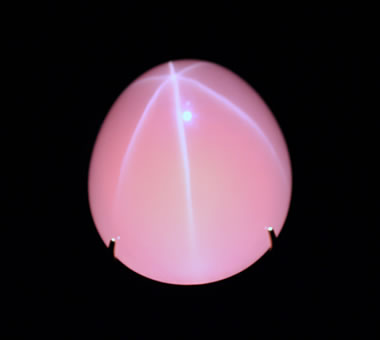 Star Rose Quartz: An oval-shaped cabochon of rose quartz exhibiting beautiful color and a spectacular six-ray star. This gem is from the collection of the Houston Museum of Natural Science, and this Creative Commons Atribution photo was taken by andytang20. 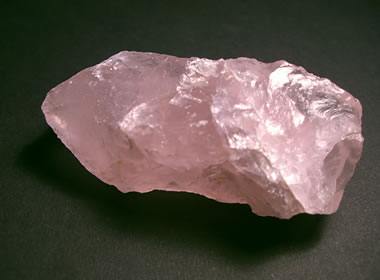 Rose Quartz Rough: A rough piece of rose quartz showing its conchoidal fracture, vitreous luster, translucence and pink color. This piece of rough has great color and would make nice cabochons, or beads, or be used to make tumbled stones in a rock tumbler. Public domain photo by Christoph Radtke.

Color and Asterism in Rose Quartz

In the mineralogical literature, the pink color of rose quartz has been attributed to titanium, manganese, and iron by a large number of authors for over 100 years. Tiny needles of rutile have been given credit for forming the six-ray star of rose quartz for the same amount of time.

In the late 1990s, an interesting investigation into the color and asterism of rose quartz was done by George Rossman, Julia Goreva, and Chi Ma at Caltech [2]. They obtained samples of rose quartz from a number of localities throughout the world and gently dissolved them in hydrofluoric acid heated to 100 degrees Celsius. This treatment was intended to dissolve away the silicon dioxide of the quartz and any included material soluble in HF at 100 degrees Celsius.

Rose quartz is found in abundance in many deposits throughout the world. Much of the rose quartz that is sold today is produced in Brazil, South Africa, India, and Madagascar. Other sources include Namibia, Mozambique, and Sri Lanka. In the United States, a deposit near Custer, South Dakota once produced significant amounts of rose quartz.

Rose quartz has been produced in laboratories, but synthetic rose quartz does not have a significant presence in the gem and jewelry marketplace. Natural material is too abundant, inexpensive, and only seen in craft jewelry. This removes the incentive to produce synthetic rose quartz instead of other, more highly priced materials.

La Madona Rosa: "The Pink Madonna" is possibly the most famous specimen of rose quartz in the world. It is believed to have been discovered in Minas Gerais, Brazil in the 1950s and was sold by Heritage Auctions in 2013 for $550,000. 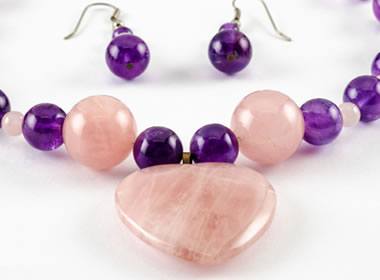 One specimen of note is "La Madona Rosa" (The Pink Madonna) that was sold for $550,000 in June, 2013 by Heritage Auctions (see video). This specimen is believed to have been discovered at the Sapucaia Mine in Minas Gerais, Brazil in the 1950s. It consists of a central cluster of smoky quartz crystals surrounded by a halo of quartz crystals with a vivid pink color. It is about 39 centimeters tall and about 20 centimeters wide. [3] [4]

"The Van Allen Belt" is another famous pink quartz specimen from Minas Gerias, Brazil. It consists of a central cluster of smoky quartz crystals surrounded by a belt of pink quartz. It is on display in The Janet Annenberg Hooker Hall of Geology, Gems, and Minerals at the Smithsonian Museum in Washington, D.C. [5]

Rose Quartz as "Color of the Year"

PANTONE®, the color company, really likes the pink color of rose quartz. They enjoy it so much and find it so useful that they named Rose Quartz as their "Color of the Year" for 2016. [6]

It is nice to know that a company with a global reputation for its expertise on color has been inspired by a semiprecious gemstone.

Combined with their blue color named "Serenity," the company is using them in a variety of ways that they hope will inspire students, teachers, artists, designers, and the public.

PANTONE® has shared the RGB, CMYK and HTML color codes for Rose Quartz and Serenity, so that they might be used in web design, graphic arts, photo editing and other work. We have used them in the reference table on this page, where you can find information on the PANTONE® website.