A brown color-variety of the mineral quartz. 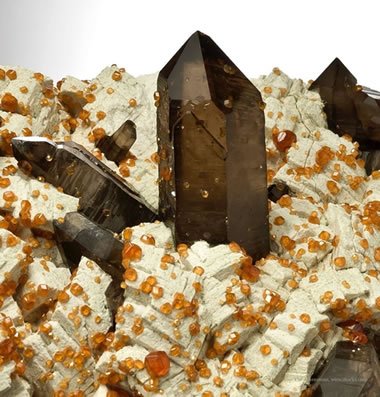 Smoky Quartz Crystals: A group of smoky quartz crystals on a bed of feldspar and peppered by tiny orange spessartine garnet crystals. This specimen is from the Wushan Spassartine Mine, Fujian Province, China. The crystal group is approximately 18 x 13.5 x 8.0 centimeters in size. Specimen and photo by Arkenstone / www.iRocks.com.

What is Smoky Quartz?

Smoky quartz is a color-variety of crystalline quartz. It ranges from a light yellowish brown to a brown that is so dark that it appears to be black. Less-desirable specimens have a grayish brown color. When cut as a gem, stones with an orangish brown to a reddish brown color are preferred by many people.

Smoky quartz is a relatively inexpensive gem material because it is abundant, found in many locations, and its brown color is not currently in high demand. It is often found in large crystals of excellent transparency with few inclusions. 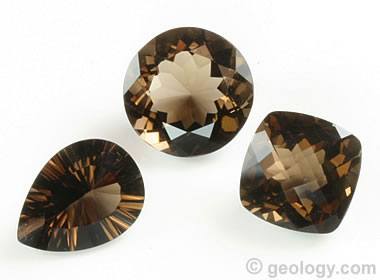 Smoky quartz is faceted or cut into beads and cabochons. These gems are often used in rings, pendants, necklaces, earrings, and brooches for people who like the yellowish brown to brown color.

Because smoky quartz has a low price and large pieces are easily obtained, it is a favorite practice material of people who are learning to facet. It is also frequently used as a carving material.

As early as the 12th centry, flat pieces of smokey quartz were used in China to make eyeglasses. Some of these were used to shield the eyes from bright light. A few were worn by judges during court proceedings, to hide their facial expressions.

Smoky quartz, amethyst, citrine, ametrine, rose quartz, and lemon quartz are all color-varieties of the mineral quartz. Other than color, they all have nearly identical properties. The properties of smoky quartz are provided in the table. 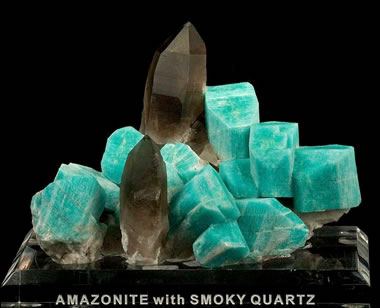 Brazil is the current source for most of the world’s smoky quartz used in jewelry. Madagascar is another important producer of smoky quartz in commercial quantities.

Smoky quartz is the national gem of Scotland, where it is called “cairngorm” after the Cairngorm Mountains. Near Pike’s Peak, Colorado, there are deposits of smoky quartz associated with amazonite that have become world famous with mineral collectors for their excellent crystals of both minerals. On May 31, 1985, smoky quartz was designated as the “official state gem” of New Hampshire. Other localities of note include Russia, Ukraine, and Switzerland.