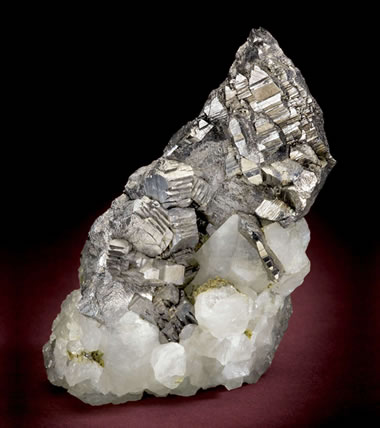 Arsenopyrite is an iron arsenic sulfide with a chemical composition of FeAsS. It is the most abundant arsenic-bearing mineral and the primary ore of arsenic metal. It is associated with other sulfide minerals in organic-rich sedimentary rocks, metamorphic rocks, and igneous rocks in many parts of the world.

In addition to being found in deposits that are large enough to be minable, arsenopyrite is widely distributed. It is not an uncommon mineral. However, it usually occurs in such small amounts and in such small particle sizes that it is easily overlooked.

Arsenopyrite contains arsenic, a toxic metal. Arsenic and arsenic compounds have been used as active ingredients in insecticides, herbicides, pesticides, and chemical weapons.

The dust of arsenopyrite can be harmful if inhaled, and the fumes produced by heating arsenopyrite are toxic. Avoid situations and activities where contact with dust and fumes can occur. Wash your hands if you must handle specimens that contain arsenopyrite - or better yet, wear gloves.

Much of the arsenopyrite that has been mined formed as a high-temperature mineral in hydrothermal veins. It is often mined, together with other metallic minerals, from veins that might contain gold, silver, lead, tungsten, or tin.

In these deposits arsenopyrite usually occurs in massive and granular form. It is often intergrown with other sulfide minerals such as chalcopyrite, galena, pyrrhotite, pyrite, and sphalerite; precious metals such as gold and silver; or other minerals such as scheelite, cassiterite, and quartz.

Significant amounts of arsenopyrite have been produced from deposits in Bolivia, China, England, Germany, Greece, Japan, Mexico, Spain, and Sweden. In North America deposits are located in Ontario, Canada, and in South Dakota, New Jersey, and New Hampshire in the United States.

In rare deposits, cobalt substitutes for some of the iron in the arsenopyrite crystal structure. This produces a solid solution series between arsenopyrite (FeAsS) and glaucodot ((Co,Fe)AsS). Depending upon the amount of glaucodot present, these deposits can sometimes be mined more profitably by processing the ore to recover both cobalt and arsenic. 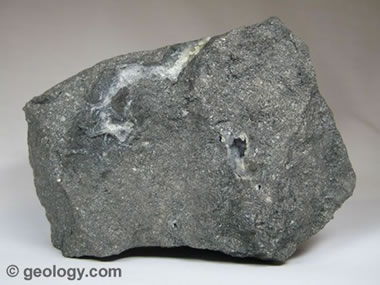 Arsenopyrite is unstable in most environments of Earth’s surface. It easily alters from its silver-white or steel-gray color to yield a pink, bronze, or brown tarnish that is sometimes iridescent.

If a geologist strikes the mineral with a rock hammer to view a fresh surface, or does a streak test, an odor of garlic might be detected. This is a characteristic of many arsenic minerals and a clue that arsenopyrite might be present.

Arsenopyrite often oxidizes to form scorodite, a hydrated iron arsenate mineral with a chemical composition of FeAsO4.2H2O. Scorodite often weathers to limonite, an amorphous, hydrated iron oxide of variable composition. In areas where mining has exposed large amounts of sulfide ores, arsenopyrite can be a contributor to acid mine drainage problems.

Arsenopyrite as a Source of Gold

The "invisible gold" occurs in two forms: 1) tiny particles of elemental gold; and, 2) gold that is chemically bound within the arsenopyrite. Elemental gold exposed by crushing can be removed with the cyanide. The chemically bound gold is more difficult to remove without smelting.

Arsenopyrite By Other Names

The name "arsenopyrite" is a contraction of "arsenical pyrites," an archaic name used for the mineral. "Mispickel" is another archaic name for arsenopyrite that was commonly used in Europe.

Uses of Arsenopyrite and Arsenic

Arsenopyrite is the primary ore of arsenic metal. The mineral contains approximately 46% arsenic by weight. Arsenic metal is used to produce a variety of alloys. It was historically used to harden lead in ammunition, but this use was nearly eliminated by the late 1900s.

Arsenic trioxide (As2O3) can be produced by smelting arsenopyrite. Arsenic trioxide is used to produce a variety of insecticides, herbicides, pesticides, and chemical weapons. Arsenic compounds are also used in medicines, as pigments in paints, to produce color in fireworks, and to color glass. Nontoxic compounds are displacing arsenic from many of its traditional uses. 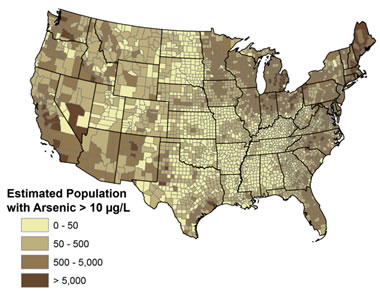 Arsenic in United States Groundwater: This map shows estimates of how many private domestic well users in each county may be drinking water with levels of arsenic of possible concern for human health (µg/L, micrograms per liter). Map from: Arsenic and Drinking Water, a report on the United States Geological Survey website, accessed October 2020.

In some parts of the world, groundwater contains enough dissolved arsenic to make it potentially harmful for human use. The two main ways that arsenic enters the groundwater are: 1) moving groundwater in contact with hazardous wastes, and, 2) moving groundwater dissolving arsenic from the rocks which it flows through. In the second case, the arsenic-bearing minerals are often arsenopyrite.

Arsenic in water has no smell and no taste, so a person might drink water containing arsenic without realizing it. The only way to determine if your well water contains arsenic is to have it tested and specifically ask the testing company to analyze for arsenic.

Health effects of dissolved arsenic in drinking water include:

If you have a water well and want to learn more about arsenic in groundwater, see the Arsenic in Groundwater factsheet on the Illinois Department of Public Health website.