The primary ore of molybdenum and a minor ore of byproduct rhenium. 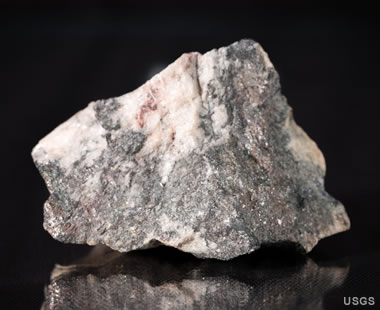 Molybdenite (gray) and quartz (white) in a specimen collected from the Henderson Mine near Empire, CO. Photograph by Scott Horvath, United States Geological Survey.

Molybdenite is a rare mineral composed of molybdenum and sulfur, with a chemical composition of MoS2. It occurs in igneous and metamorphic rocks as gray hexagonal crystals and foliated masses with a metallic luster. Molybdenite is the most important ore of molybdenum and often contains minor amounts of rhenium which are often produced as a byproduct.

Molybdenite has physical properties that often cause it to be confused with graphite. Both of these minerals are gray to silver in color, have a very low hardness, and occur in hexagonal crystals or foliated masses. Both minerals have a layered atomic structure with planes of extreme weakness. This gives them a slippery feel and makes them valuable as a solid lubricant.

Molybdenite has a higher specific gravity than graphite (molybdenite=4.7, graphite=2.23). Molybdenite usually has a slightly bluish-gray color and a slightly bluish-gray streak, while graphite's color and streak are gray to black. Molybdenite usually has a higher luster than graphite. Experienced observers can often use these subtle differences in color, streak and luster to separate graphite from molybdenite. A variety of laboratory methods can also be used to identify molybdenite.

Minerals that are often found with molybdenite include quartz, pyrite, chalcopyrite, fluorite, cassiterite, scheelite, and wolframite.

Molybdenite as an Ore of Rhenium

With an average crustal abundance of less than one part per billion, rhenium is one of the rarest elements in Earth’s crust. [3] Most of the world’s known rhenium resource exists within the mineral molybdenite, substituting for molybdenum atoms in the mineral’s crystal lattice.

Rhenium has one of the most surprising and indirect methods of production of any metal. "About 80 percent of the rhenium obtained through mining is recovered from the flue dust produced during the roasting of molybdenite concentrates from porphyry copper deposits."

Rhenium has few uses, but they are very important uses. Over 80 percent of the rhenium consumed worldwide is used to make the turbine blades of jet engines. These blades must be made from superalloys that can survive in the extreme stress and high-temperature environment of a jet engine. Most of the remaining rhenium is used as a platinum-rhenium catalyst in petroleum refining. [3]

Layered Structure of Molybdenite: Sheets of molybdenum atoms (blue) are sandwiched between sheets of sulfur atoms (yellow) to form a layer. These layers are stacked one on top of another. However, the layers are so poorly bonded together that slight pressure can cause them to slip past one another. These weak bonds form the cleavage planes of molybdenite. The bonds are so weak that finger pressure can displace the layers, and this gives molybdenite its slippery feel.

Molybdenite has a layered atomic structure in which a sheet of molybdenum atoms is sandwiched between two sheets of sulfur. The bonds between the molybdenum and sulfur atoms are very strong.

Molybdenite is the primary ore of molybdenum metal, which is an extremely important metal for making specialty alloys. Small amounts of molybdenum added to steel and other alloys can significantly increase their toughness, heat resistance, hardness, strength, and resistance to corrosion.

Molybdenum is an important ingredient in making stainless steel, alloy steels, and a variety of superalloys. Molybdenum metal is also used in some electronic devices and to make heating elements used in high-temperature electric furnaces.