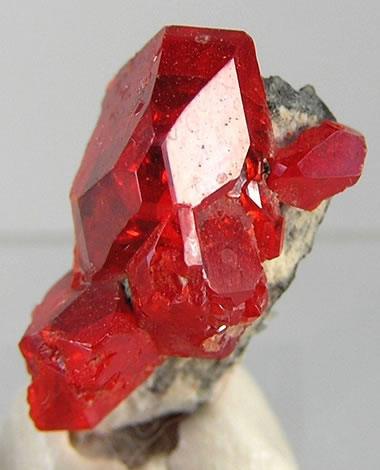 Realgar and orpiment are very similar minerals. They are both arsenic sulfides and members of the monoclinic crystal system. They form in the same geological environments and can be closely associated in the same deposits. They have similar physical properties and similar histories of use by man. Because of these similarities, we decided to describe realgar and orpiment in a single article.

Realgar and orpiment are both toxic minerals, and contact with them should be avoided. They are not suitable for classroom specimens.

Realgar is a monoclinic arsenic sulfide mineral with a brilliant red color and a chemical composition of As4S4. Well-formed realgar crystals can look so much like red gemstones that the mineral was often called "ruby sulfur" and "ruby arsenic."

However, realgar is not used as a gemstone because it is very soft, with a Mohs hardness of just 1-1/2 to 2. It is easily ground into a fine, bright red powder. Those properties caused it to become a favorite pigment in many parts of the ancient world. It was traded over great distances to make paints, inks, and dyes - until people realized that it was toxic.

The arsenic in realgar was the source of its toxicity. After its toxicity was realized in the Middle Ages, the mineral was used as a poison to kill rodents, insects, and weeds. Realgar was also used in leather processing to remove the hair from hides. Today it is rarely used for any of these purposes because more effective and less toxic substitutes have been developed. However, some use of realgar in ritualistic cosmetics and "medicines" continues in a few parts of the world. Today the main use of realgar is as an ore of arsenic metal.

The chemical formula of realgar is often written as As4S4 instead of the simpler AsS. This is done because As4S4 represents a structural unit of the mineral. A compound of As+3 and S-2 would be out of electrical balance. In realgar, three of the arsenics are joined in a chain by covalent bonds. This gives the arsenics an effective electrical charge of +8. That combines with four S-2 ions to produce an electrically neutral molecule. This is why realgar's chemical composition is often presented as As4S4 instead of AsS. 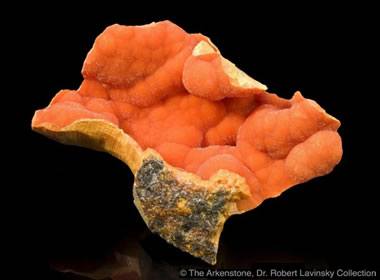 Orpiment: Bright orange orpiment from the Jiepaiyu Mine in Hunan Province, China. This specimen shows the botryoidal habit of orpiment. It measures 12.7 centimeters in length. Specimen and photo by Arkenstone / www.iRocks.com.

Orpiment is a monoclinic arsenic sulfide with a yellow-orange color and a chemical composition of As2S3. It has a Mohs hardness of 1-1/2 to 2 and is easily ground into a yellow to yellow-orange powder. Like realgar, its earliest widespread use was as a pigment for paints, inks, and dyes, and it was traded over great distances.

Today the primary use of orpiment is as an ore of arsenic. It is also used in manufacturing oil cloth, semiconductors, and photoconductors. 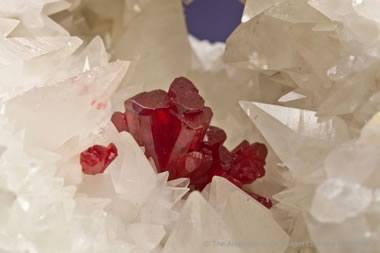 Realgar on calcite: Red realgar crystals on white calcite, from the Jiepaiyu Mine in Hunan Province, China. Specimen and photo by Arkenstone / www.iRocks.com.

Realgar and orpiment are mainly found associated with hydrothermal and volcanic activities. They are sublimation products at volcanic vents and crystallization products at hot springs. These are among the earliest deposits exploited in the middle ages. Underground deposits of realgar and orpiment are in veins and fractures. There they are associated with lead, silver, gold, and other arsenic minerals.