Epidote is a metamorphic mineral and the name of a silicate mineral group. 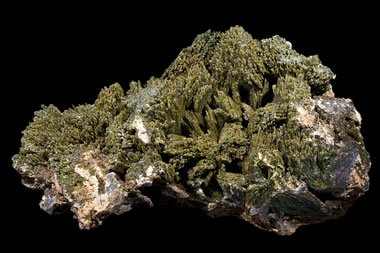 Epidote: Epidote from Rockbridge County, Virginia. This specimen is approximately 4 inches (10 centimeters) across.

Epidote is a name that is used in two different ways in mineralogy: 1) the "Epidote Group" is the name of a group of silicate minerals that share common structural and compositional characteristics; and, 2) "Epidote" is the name of the most common mineral in the Epidote Group.

What is Epidote (the mineral)?

Epidote is a silicate mineral that is commonly found in regionally metamorphosed rocks of low-to-moderate grade. In these rocks, epidote is often associated with amphiboles, feldspars, quartz, and chlorite. It occurs as replacements of mineral grains that have been altered by metamorphism. It is frequently found in veins that cut granite. It occurs as monoclinic crystals in pegmatites. It is also found in massive form and as monoclinic crystals in marbles and schists that were formed or altered through contact metamorphism.

Epidote usually ranges between yellowish green to pistachio green in color. Less often it is brownish green to black. In massive form it is usually translucent with a vitreous luster. Well-formed crystals from marble and pegmatite are often transparent.

Epidote has a chemical composition of Ca2(Al2,Fe)(SiO4)(Si2O7)O(OH). It is an end member of a solid solution series with clinozoisite. In that series, the iron of epidote is gradually replaced by aluminum to the end member clinozoisite composition of Ca2Al3(SiO4)(Si2O7)O(OH). Clinozoisite is usually lighter in color than epidote because iron is what produces epidote's greenish to brownish color.


What is Epidote (the mineral group)?

Members of the epidote mineral group have a crystal structure that consists of isolated and paired silica tetrahedrons. They share a generalized chemical composition of A2M3(Si2O7)(SiO4)O(OH). "A" is a pairing of calcium, manganese, strontium, lead, or sometimes a rare earth element. "M" is usually aluminum pairing with iron, magnesium, manganese, or vanadium. Some of the member minerals of the epidote group are listed in the table with their chemical compositions. 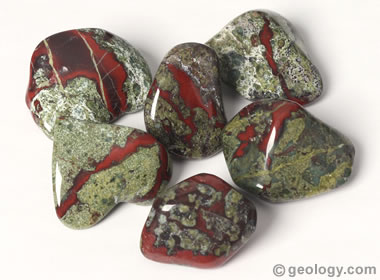 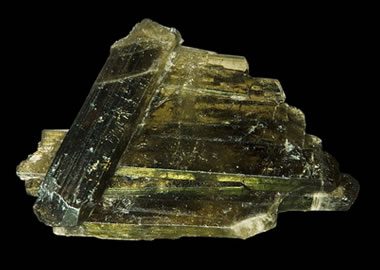 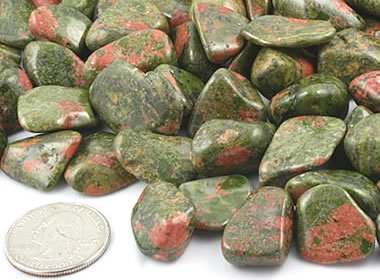 Epidote in Unakite: Tumbled stones made from unakite, an igneous rock composed mainly of green epidote, pink orthoclase feldspar, and quartz. This unakite was mined in South Africa.

Epidosite is a metamorphic rock composed mainly of epidote with small amounts of quartz. It forms when basalts in sheeted dikes and ophiolites are transformed by hydrothermal activity or metasomatism.

Unakite is a rock that forms from the metamorphism of granite. Less-resistant minerals in the granite are altered to epidote or replaced by epidote, with the orthoclase and quartz remaining. It is an interesting pink and green colored rock that was first discovered in the Unakas Mountains of North Carolina, from which its name was derived. 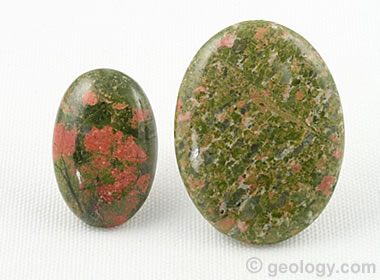 Epidote has no significant use as an industrial mineral and has only minor use as a gemstone. High-quality transparent crystals are sometimes cut into faceted stones. These have never attracted much interest in the commercial jewelry market, probably because their colors are not customer favorites. Most of the faceted stones produced are purchased by gem and mineral collectors.

Unakite is a popular rock used by lapidaries to make beads, ornamental objects, and cut into cabochons. It is considered to be a semiprecious stone. The bright pink and pistachio green colors are very unusual and attract attention. Unakite is popular as a tumbled stone. A small amount of epidosite is also cut into cabochons.