One of Montana's popular nicknames is "The Treasure State." This nickname was inspired by the many mineral resources that are found in Montana. Gold has been produced from the sediments of many streams. Gold, silver, and numerous other metals have been produced from hard rock deposits.

Two gemstones, sapphire and agate, have been so popular in Montana that the state legislature designated them as "official state gemstones" in 1969.

Sapphires were discovered in Montana in the 1860s. Since then millions of carats of "Montana Sapphires" have been produced, and at least one million cut stones have entered the jewelry trade. The people of Montana and visitors to the state have become enthusiastic patrons of a small sapphire-mining industry.

Beautiful agates have been found at many locations in southeastern Montana. They have been persistently popular with local rockhounds for over 100 years. Montana Moss Agate and Dryhead Agate have a popularity that extends far beyond the borders of the state.

Numerous other gem materials have been produced in Montana. These include: jasper, garnet, varieties of quartz, rhodonite, serpentine, staurolite, topaz, tourmaline, and wonderstone.

A few diamonds, diamond indicator minerals, and kimberlites have been found in the state. These signs indicate that a deposit worthy of mining might be found. If diamond hunters are fortunate, Montana could have the only commercial diamond mine in the United States. 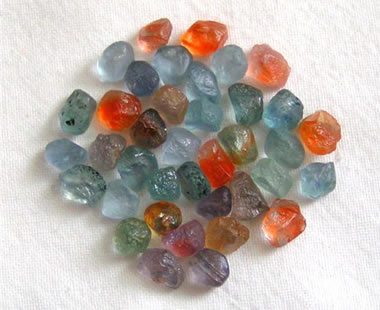 Heat-treated Sapphires: These Montana sapphires have received heat treatment to enhance their color. Photo used with permission of 46 Degree Resources.

In the early 1860s, very few people lived in the Montana Territory. That began to change with the discovery of gold at several locations. Within a few years the population was growing rapidly, and the search for gold motivated people to carefully examine the sediments of Montana rivers and streams.

Many of these prospectors noticed the colored sand grains and pebbles that lingered in their gold pans and sluices after the more common sediment particles were washed away. Most prospectors were totally focused on the search for gold and discarded them. Many who noticed the colorful grains did not know that they were corundum, the mineral of ruby and sapphire. Their high specific gravity (3.9 to 4.1) caused them to be concentrated in the same sediments as placer gold.

Eventually a few people realized that these colorful stones were sapphires, but they were not motivated to collect them. Why? Most of these stones did not have the blue color of highly marketable sapphires. Also, assessing the quality of the stones required expertise in gemology. The miners did not want to collect pebbles, only to find out that their big lot of "finds" contained just a few specimens of value.

Numerous sapphires of obvious gem quality were found in many Montana streams. Some of these were cut into gemstones. However, in the late 1800s very few people were faceting gemstones in the United States, so a demand for rough gem sapphire had not been established. 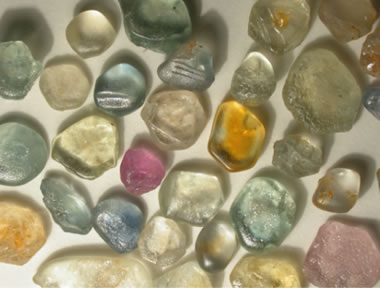 A small market for industrial sapphire did exist in the late 1800s. Some was used to produce abrasive granules. Larger pieces without obvious fractures or inclusions were used to manufacture wear-resistant bearings. Much of the bearing material was sold to watch factories in Europe. In the early 1900s, synthetic sapphire producers began forcing natural sapphire out of the industrial market. They produced a steady supply of synthetic sapphire with a uniform and predictable quality. Manufacturing solved some of the problems characteristic of the natural sapphire market.

Then, in the 1980s gem treaters in Thailand discovered how to heat white and yellow sapphires to a commercial blue color. Heat treatment of sapphires became such a common practice that most sapphires entering the gem market today had their color improved by heating.

These advancements in gem treatments converted many of Montana's previously worthless sapphires into beautiful gems of commercial quality. These were quickly mined during the 1990s, and several million carats of Montana sapphires entered the gem marketplace. Sapphire mining continues in Montana today. Most Montana sapphires are found by companies who use mechanized mining and processing methods, but much of the mining is done by hobbyist miners who use simple methods of manual mining. 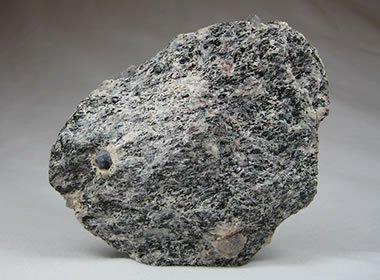 Corundum gneiss with sapphire: Host rocks for Montana sapphires include schist, gneiss, and igneous dikes. Most mining is confined to alluvial deposits because hard rock mining is much more costly and many of the sapphires are destroyed during extraction. This is a specimen of corundum gneiss from Gallatin Valley, Montana. This specimen is about twelve centimeters across and has a round blue sapphire crystal on the left side.

In 1879, prospectors found small amounts of gold in Yogo Creek, a small stream in central Montana. They didn't find a lot of gold, but many panners noticed bright blue pebbles in the stream and an unusual rock formation a few feet in width cutting a limestone unit in the lower part of the drainage.

Many prospectors didn't realize that the blue pebbles had the same hue and saturation as the most highly desirable blue sapphires. Perhaps they heard that the sapphires found in other parts of the state were not worth collecting. Nevertheless, when they left Yogo Creek they walked away from what would later be described as the greatest sapphire deposit in the western hemisphere.

In 1894, a property owner sent a small box of blue pebbles panned from Yogo Creek to a gold assayer, who didn't know what to do with them, so he forwarded them on to Tiffany's in New York City. At that time Tiffany's was considered to be the scientific authority for gemstones in the United States. George Kunz, the chief gemologist at Tiffany's, called Yogo Sapphires "the finest precious gemstones ever found in the United States."

The unusual rock formation that cut the limestone unit was later determined to be a vertically dipping dike of sapphire-bearing igneous rock. At the surface it weathered into a soft mud that was favored by gophers, whose burrows made the dike easy to trace across the landscape's surface for a distance of a few miles.

The sapphires of Yogo Gulch have now been famous for over 100 years. Millions have been produced, and although the deposits have been heavily prospected, some production continues today.

Yogo Sapphires have been produced from both rock and alluvial deposits and in a wide range of colors which include blues, blue-greens, greens, pinks, pale reds, purples, yellows, and oranges. (Blue corundum is known as sapphire, red corundum is known as ruby, and corundum of any other color is known as fancy sapphire.) Much of the production is from dig-for-fee operations. Some gem-grade garnets are also produced from alluvial deposits, but most are industrial quality.

In addition to the igneous dike at Yogo, Montana sapphires are hosted in schist and gneiss in several parts of the state. These rock units are rarely mined because they are very hard and costly to excavate. In addition, the work of excavation damages many of the sapphires.

Montana Moss Agate: Perhaps the most widely known agate variety from Montana is "Montana Moss." It is a clear to orange to brown agate that contains black mossy dendrites caused by manganese oxide inclusions.

Montana Moss receives its name from its black dendritic to mossy to geometric-shaped inclusions. This distinctive appearance is what makes Montana Moss Agate recognizable and popular. The black inclusions are thought to be a manganese oxide. The reddish brown color of some specimens is thought to be caused by small amounts of iron oxide in the agate.

These agate nodules formed in cavities and voids of the igneous bedrock and ashfalls that occur in this area. The nodules often have concentric banding with occasional drusy centers. They are much more resistant to weathering than the bedrock, and that concentrates them in soils and stream gravels.

Montana Moss is an abundant agate. It occurs over a broad geographic area instead of at a single deposit. This wide distribution was created by regional magmatic and hydrothermal activity of the Yellowstone Region.

Dryhead Agate: Dryhead agate is a popular agate material found in the Bighorn Canyon area of eastern Montana. It is known for its nodules with orange, red, brown, white, and sometimes pink, fortification banding surrounded by a contrasting dark brown matrix, often with drusy central cavities.

Dryhead Agate is one of the most beautiful agates found anywhere. It is found in an area of southeastern Montana bounded by the Big Horn Mountains, the Pryor Mountains, and the Big Horn River. In this area, oval-shaped agate nodules are found as float in the soil and in stream sediments.

The quality of the nodules varies. Most are only a few inches across. Some of the best ones have a thick chocolate-brown rind and a fortification agate interior. Bands of agate within the fortifications can be white, yellow, orange, pink, red, or brown in color. The centers can be solid agate, drusy quartz, or hollow. Lower quality specimens can be vuggy or have calcite mixed with the agate. Those with thick areas of colorful banded agate produce the best cabochons. Before cutting one into slabs, you should know that many collectors of natural agate will pay a spectacular price for them. Hundreds of dollars are often paid for half of a sawn and polished Dryhead Agate that is only a few inches across.

Areas where the best agates are known to occur were mined by individuals during the 1950s, 1960s, and 1970s. In the 1980s, some areas were open to collectors on a fee mining basis. Today, very little new Dryhead Agate enters the lapidary market. What is currently being sold is mostly from old stocks.

Montana Moss Agate: A few more Montana Moss agates of various shapes and sizes. Some of the cabochons in the photo above show interesting mossy inclusions. Others exhibit the orange-brown banding common in agates found in gravels of the Yellowstone River and its tributaries in the southeastern part of the state. Some of them have both of these features.

In 1990 a fourteen-carat diamond, one of the most famous discovered in North America, was found in Montana. It was found by Darlene Dennis, who was out for a walk on a rural road near the community of Craig in Lewis and Clark County. It was named the "Lewis and Clark Diamond" after the county in which it was found.

The stone was a rounded octahedral crystal without sharp points and edges. She sold it to a New York gallery for $80,000. The stone attracted a lot of attention to the area where it was found, but to date, no one has identified a viable source of diamonds in the area.

Small diamonds, diatremes, kimberlites, and diamond indicator minerals have been found at many locations in Montana. None of them have led to the development of a mine or a large-scale commercial exploration.

Find Your Own Montana Gems

If you like gems and minerals, you might enjoy a visit to a fee mining site. These are mining sites that you can visit, pay a fee, search for gems or minerals, and keep whatever you find. The RockTumbler.com website has a list of fee mining sites in Montana and other states.