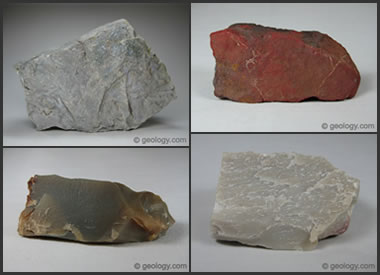 Microcrystalline Quartz: Four varieties of microcrystalline quartz and names that might be used for them. Clockwise from top left: Chert, red jasper, novaculite, and flint. More detail on each of these below.

Flint, chert, and jasper are names commonly used by geologists and by the general public for opaque specimens of microcrystalline quartz. The same hand specimen might be called "chert" by one person, "flint" by another, and "jasper" by a third.

The name used can be influenced by the educational background of the person, the physical properties of the specimen, the geologic occurrence of the specimen, and any historic use of the material. 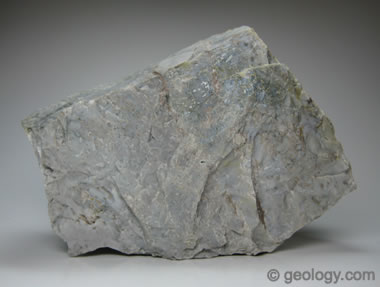 Chert: A specimen of gray chert from near Joplin, Missouri. The specimen is opaque with a coarse texture, with numerous voids and fractures. It might be used for tool-making, but knapping performance would be poor. Specimen is approximately four inches across.

The name used also depends upon the geologic occurrence of the material or the historic use of the material by people. If the material makes up a sedimentary rock unit that can be traced from one geographic location to another, geologists are likely to call the material "chert". Some of these cherts can be thick enough and laterally extensive enough to serve as oil and gas reservoirs over a broad geographic area. An example is the Huntersville Chert, which has produced significant amounts of natural gas in West Virginia. 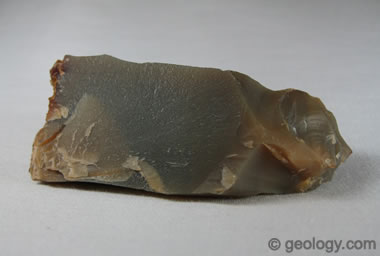 Flint: A specimen of brown, translucent flint from Minas Gerais, Brazil. This specimen has a fine-grained, uniform texture that should perform well in manufacturing tools. Specimen is approximately four inches across.

However, if the material comprises an artifact or is part of a rock unit that has historically been used in manufacturing weapons or tools, the name "flint" is often used. The Vanport Flint of eastern Ohio and the Alibates Flint of northern Texas are both names used for laterally extensive rock units. Native Americans mined, traded, and knapped these materials to manufacture tools for thousands of years.

The name "flint" is often the preferred name used for material with a very fine grain size and a slightly higher luster. These "fine-grained" materials break with greater predictability and produce a sharper edge. Many ancient tool makers understood the quality and properties of the materials that they used. Given a choice, these expert tool makers would have selected materials to perform well during manufacturing and use. 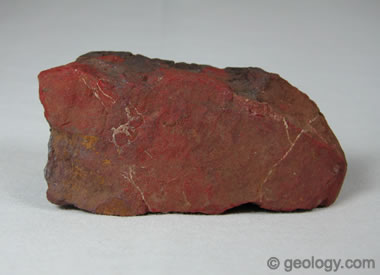 Red Jasper: A specimen of opaque jasper found in Vermont. It has an excellent red color and might cut attractive cabochons. Specimen is approximately three inches across.

Their interest in the material is based upon its ability to be accurately cut; its ability to accept a bright polish; and, most importantly, its beautiful color, pattern or appearance when cutting is done. They intentionally select specimens from the high end of quality and appearance.

Gemologists are interested in microcrystalline quartz. Something that a geologist might learn from a gemologist is how to immediately tell the difference between jasper, agate (both are varieties of chalcedony) and pieces of quartz that do not have a microcrystalline texture. Here’s the procedure… look at one of the conchoidal fracture surfaces...

A) If it has a vitreous luster on conchoidal surfaces, it is coarsely crystalline quartz.

B) If it has a dull luster on conchoidal surfaces, it is a variety of chalcedony.

C) If it is opaque, it is jasper, a variety of chalcedony.

D) If it is translucent and banded, it is agate, a variety of chalcedony.

E) If it is translucent and not banded, the name chalcedony is used.

Other Names for These Rocks

Microcrystalline quartz is more common than many people realize. There are some special varieties found in a few parts of the world that have become famous for various reasons. Novaculite and mookaite are two examples. 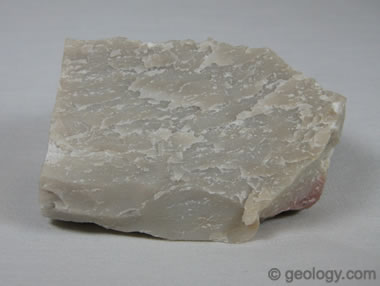 Novaculite: A specimen of gray novaculite from near Hot Springs, Arkansas. As with much novaculite, conchoidal surfaces on the rock are slightly rough to the touch. Specimen is approximately four inches across.

In the Ouachita Mountains of central Arkansas, a laterally persistent rock unit comprised of chert has been lightly metamorphosed. It is known as the Arkansas Novaculite Formation. The metamorphism, combined with its fine, uniform texture makes it an excellent rock for sharpening steel blades.

Novaculite sharpening stones are made by cutting the rock into thin rectangular pieces and then honing them to a perfectly flat surface. Novaculite stones of slightly different textures are used for sharpening and polishing the blade. A drop of oil is often applied for lubrication.

Novaculite sharpening stones were most popular from the early 1800s into the mid 1900s - until synthetic sharpening stones and artificial abrasives began to compete on the basis of price. Today, many people still make a special effort to obtain a "Washita Stone" or an "Arkansas Stone" cut from the Arkansas Novaculite Formation. Their reputation still influences the decision of many customers. 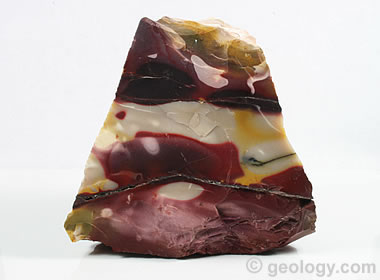 Mookaite: A specimen of the Windalia Radiolarite with a spectacular red, maroon, yellow and cream color pattern. It would cut some beautiful cabochons. From the Mooka Creek area of Western Australia. Specimen is approximately five inches across.

Mookaite is an interesting lapidary material mined in Western Australia from a rock unit known as the Windalia Radiolarite. Radiolarites are cherts formed mainly from the thin siliceous shells of tiny marine organisms known as radiolarians. Radiolarians can be so abundant in some parts of the ocean that the seafloor sediments there are composed mainly of radiolarian debris. These lithify by the solution and redeposition of the shell debris in the form of a silica cement.

In one area along Mooka Creek, the Windalia Radiolarite is exposed at the surface. The material here is special because it has been stained by groundwater into a variety of red, maroon, purple, white, cream, yellow and brown colors. The result is a brightly colored, hard, dense, very fine-grained rock that accepts an exceptional polish. It was named "mookaite" after the creek.