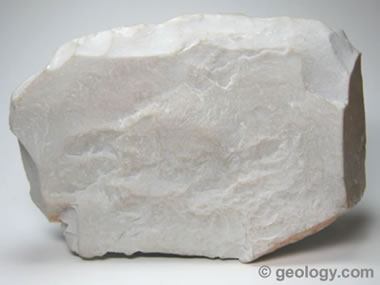 Novaculite: Specimen of novaculite showing its fine-grained texture and conchoidal fracture. Specimen is approximately 3 inches across.

Novaculite is a dense, hard, fine-grained siliceous rock that breaks with a conchoidal fracture. It forms from sediments deposited in marine environments where organisms such as diatoms (single-celled algae that secrete a hard shell composed of silicon dioxide) are abundant in the water. When the diatoms die, their silicon dioxide shells fall to the seafloor. In some areas these diatom shells are the primary ingredient of the seafloor sediments.

During diagenesis (the transformation from sediment to rock) the silicon dioxide from the diatom shells is transformed into chalcedony (a microcrystalline silicon dioxide). At this point the rock is chert. The chert is transformed into novaculite as further diagenesis and low-grade metamorphism recrystallize the chalcedony into microcrystalline quartz grains. 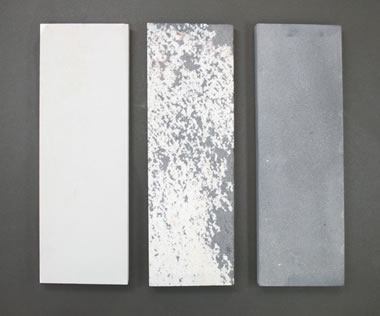 Outcrops of the Arkansas Novaculite Formation are prominent landscape features of the Ouachita Mountains. Compared to most other types of rock, novaculite is very resistant to chemical and physical weathering. This makes it a ridge-former and a cliff-former in the areas where it outcrops. Peaks, cliffs, and ridges formed by novaculite are prominent landscape features of the Ouachitas. 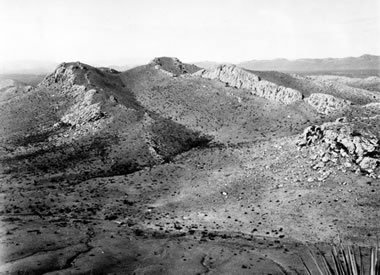 Novaculite ridges: Ridges of the Caballos Novaculite in the Lightning Hills of Brewster County, Texas. The Lightning overthrust crops out in the valley between the ridges. In the subsurface, the Caballos novaculite yields oil and gas from a tripolitic zone near the top of the rock unit and from fracture porosity in the lower portion of the rock unit. USGS Photo taken in November, 1930 and included in U.S. Geological Survey Professional Paper 187.

First Use of Arkansas Novaculite

Native Americans were the first people to mine the Arkansas Novaculite Formation. They noticed its conchoidal fracture and discovered that it could be knapped - just like flint - into projectile points, scrapers, and cutting tools. They mined novaculite, used it to manufacture cutting tools and weapons, and traded the material and products over a broad area. The Quapaw, Osage, Caddo, Tunica, Chickasaw, and Natchez tribes were especially involved in the mining.

Prehistoric people in other parts of the world have worked novaculite deposits to manufacture weapons and cutting tools. Novaculite and manufactured products from these areas were transported and traded across great distances.

European settlers in the Ouachita region were the second people to mine the Arkansas Novaculite Formation. They valued it for a different reason. They found that novaculite could be used to sharpen metal tools and weapons. They soon began producing sharpening tools and trading them with distant partners.

The Arkansas Novaculite Formation yields sharpening-grade stones in a range of textures. "Washita Stone" has the appearance of unglazed porcelain, a porosity of several percent and serves as a good stone for coarse sharpening. An extremely fine-grained material known as "Arkansas Stone" has almost no porosity and is an excellent tool for honing a razor-sharp blade. These stones are broken from the quarry with black-powder blasting, sawn to shape with a diamond saw, and then lapped to form a surface that is perfectly flat and smooth.

Other Uses for Novaculite

Novaculite is a very durable rock that resists abrasion and is well suited for use as road base, railroad ballast, and rip-rap. Although it works especially well, its use in these applications is avoided. The reason: novaculite is so abrasive on metal that it causes excessive wear on excavating equipment used to mine it, on crushers and classifiers used to process it, and it wears out the beds of trucks that haul it. Novaculite is also not used as a concrete aggregate for the same reasons and because it reacts with cement to produce pop-outs (aggregate grains that separate from the concrete to produce a pit in the pavement surface).

Novaculite's heat-resistant properties make it a good material for making refractory products. It has also been used in glass manufacturing, with some of it being used in Pyrex products. The abrasive properties of novaculite make it useful for manufacturing deburring media, files, and grinding media.

The upper portion of the Arkansas Novaculite Formation in some areas has a significant carbonate content. In these areas the novaculite weathers to yield a granular quartz residue with a very high silica content and a very fine grain size. This material is mined and processed into a product known as tripoli. Most of the tripoli used in the United States today is a filler or extender in plastics, rubber, paint, caulking compounds, and other products. Tripoli is added to soaps and scouring powders to serve as an abrasive. It is also used as an abrasive in metal finishing, woodworking, lapidary, and auto painting shops.

Novaculite sometimes serves as a reservoir for oil and natural gas. Several oil and gas fields in the Ouachita overthrust belt of Oklahoma and Texas produce from the Caballos Novaculite. Tripolitic chert zones near the top of the rock unit can have significant porosity, and the highly fractured novaculite is another form of porosity. Areas underlain by fractured novaculite are also preferred drilling sites when drilling for groundwater.

Small blocks of black novaculite are also used in the "acid test" for determining the gold content of jewelry. In this, the jeweler rubs the suspected gold item across a fine-grained block of black novaculite to produce a tiny streak of metal. A drop of aqua regia (a mixture of hydrochloric acid and nitric acid) of known concentration is placed on the streak. If the streak disappears, it was dissolved by the aqua regia. Aqua regia solutions of different concentration will dissolve different karat weights of gold. Standard aqua regia solutions have been developed to identify gold of 10k, 12k, 14k, 18k, 20k, and 22k purity.