Used as a construction stone for thousands of years.

Stonehenge is one of the most famous stone structures ever made by humans. Stones of the monument's inner circle are made of diabase. They were transported about 240 miles from Wales to the monument site in England in about 2100 BC. Image copyright iStockphoto / bonetiz. 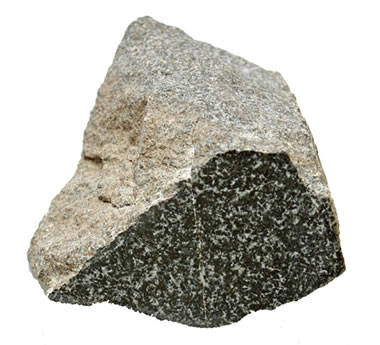 Diabase: A hand specimen of diabase approximately ten centimeters across. The bottom salt-and-pepper colored portion is a polished surface displaying the plagioclase (white) and pyroxene (black) minerals that make up this specimen of an intrusive igneous rock. The top part nicely displays a light gray weathering rind that is typical of diabase. Photograph and specimen by CrankyScorpion, displayed here under a Creative Commons License.

In the United States and Canada, the name "diabase" is used for a dark gray to black, fine-grained, intrusive igneous rock that has a composition similar to basalt and gabbro. The difference between basalt, diabase, and gabbro is in their grain size - which was determined by their cooling rates.

Basalt: rapid cooling in a lava flow produced individual crystals that are so small they are difficult to see with the unaided eye.

Diabase: slower cooling in shallow intrusions such as sills, dikes, lopoliths or laccoliths allowed individual crystals to grow slightly larger - up to about two millimeters in size.

Gabbro: slowest cooling below Earth's surface gave crystals a longer time to grow - some may be over a centimeter across or larger.

In the United Kingdom and a few other countries, diabase is known as "dolerite". The two words are synonyms. 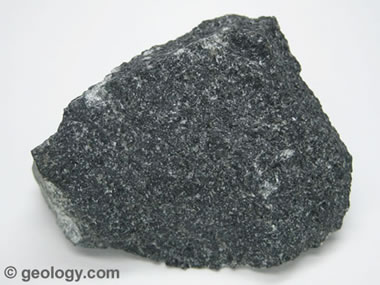 Diabase: A specimen of diabase in which the plagioclase crystals are dark gray to black. It does not have the salt-and-pepper appearance of the specimen at the top of this page. This rock is approximately eight centimeters across.

Diabase typically has a mineral composition that is dominated by the plagioclase feldspar known as labradorite (approximately 40% to 70% of the rock). Most of the remainder is made up of pyroxene minerals (usually augite). Minor amounts of hornblende, olivine, magnetite, and quartz can be found in some diabase rocks.

Although the mineral species present in diabase often have perfect cleavage, when they are present in tiny interlocking grains, the cleavage is usually not an important durability concern when the rock is used as a construction material. 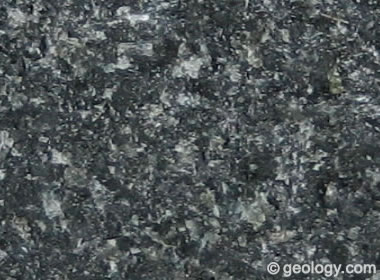 Diabase Close View: In this close-up view, you can see the texture of diabase. Even at this magnification it would be difficult to identify the individual mineral grains - which are less than two millimeters across.

Here are two facts about diabase and its commercial use:

1) The plagioclase in diabase is often of the labradorite variety. Diabase from some quarries contains abundant crystals of labradorite that are capable of producing colorful reflections known as "labradorescence". When cut and polished, this diabase can serve as an attractive architectural stone.

2) The pyroxene minerals in diabase, as well as the feldspars, will form a weathering rind when exposed to the elements. So, an initially black construction stone can alter to a chalky white, gray, or tan color. This should be expected unless the stone has been polished, treated, or used in a location not exposed to the elements. 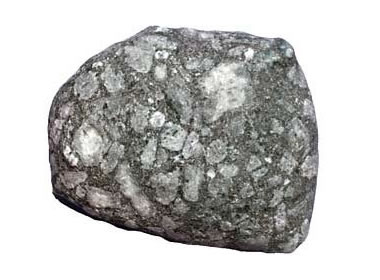 Diabase Porphyry: This hand specimen of diabase has two distinctly different crystal sizes. There are large, light-colored crystals, known as phenocrysts, suspended in a matrix of fine dark-colored crystals, known as groundmass. An igneous rock composed of minerals with two distinctly different crystal sizes is known as a porphyry. Photograph by the National Park Service.

The parent magma of the rock began cooling slowly, deep underground, and some large crystals of minerals with a high crystallization temperature began to form there. The magma was then erupted to the surface or moved to a shallow location, such as a dike or sill, where the next, and often the final, part of its cooling occurred. The cooling rate at this shallow depth was faster and the groundmass of the rock is composed of small crystals of minerals that have a lower cooling temperature.

Much diabase contains two distinctly different crystal sizes and is known as "diabase porphyry". When cut and polished, it can make an interesting and attractive stone for use in tiles, countertops, window sills, stair treads, facing stone or other uses. 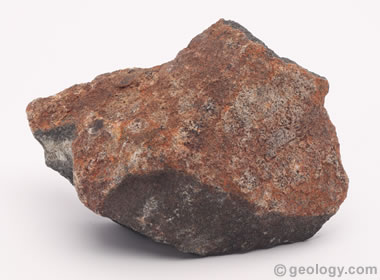 Weathered Diabase: This specimen of diabase has formed a reddish brown weathering rind. A geologist who wants to examine this rock properly should break it to expose a freshly broken surface. This specimen measures about 9.7 cm (3-7/8 inches) across and was collected near Dillsburg, Pennsylvania.

The fine-grained texture of diabase makes identification in the field or in a classroom a difficult undertaking. The observer must have enough skill to view the physical properties of tiny mineral grains, and enough knowledge to identify the minerals. Getting a confident identification in these locations can be difficult.

Diabase is best identified in thin section with a petrographic microscope, with x-ray diffraction, or with other instruments that can identify the component minerals and their relative abundances. So, many people take the easy way out and call the unknown specimen "trap rock" (a layman’s name that fits a number of dark, fine-grained igneous rocks) or take a chance of declaring an incorrect scientific name. When you hear the name "diabase", you should examine the rock to confirm its identity, if the name of the rock is important. 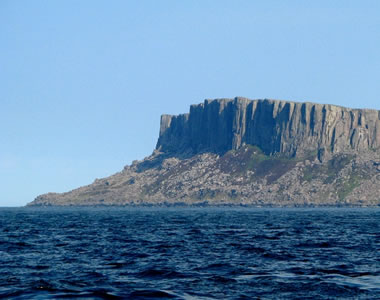 Diabase Sill: Fair Head, the outcrop of a diabase sill on the coastline of Northern Ireland. The sides of Fair Head are columnar-jointed rock. It is a scenic overlook, a nice view from cruises, and a very popular rock climbing site - with over 400 routes - many of which follow the vertical joints of the rock columns. Photo by Rossographer of Geograph, used here under a Creative Commons License.

The formation of diabase has two requirements:

2) shallow emplacement and cooling in a relatively small subsurface structure such as a sill, dike, lopolith or laccolith.

Explanations, illustrations, and photos of these structures can be found in this article. 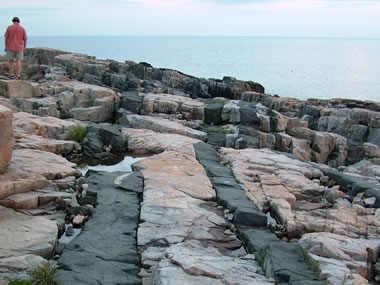 Most diabase that is mined is used in the construction industry. There are several types of use:

1) Crushed Stone: Diabase is one of many types of "trap rock" used as crushed stone in the construction industry. These are durable rocks that have many uses. For most of these uses, the aggregate must meet certain specifications of abrasion resistance, weathering resistance, and crush resistance. Example uses include: 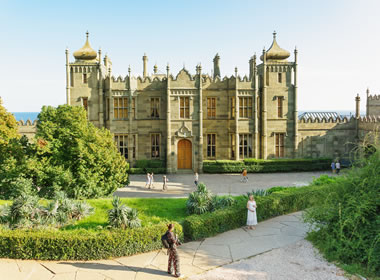 Vorontsov Palace, built in the early 1800s in Yalta, Crimea, Russia, has diabase used for much of the exterior. Photograph copyright iStockphoto / Natalia Garmasheva.

2) Dimension Stone: Diabase can be cut or sheared into blocks of specific or random sizes. These are some categories of diabase use:

b) Architectural Stone: special-shape pieces used as stair treads, window lintels, window sills, counter tops, flooring tiles, facing stone, columns, etc. When used as an architectural stone, diabase is often called by the trade term "black granite". (In the dimension stone trade, the word "granite" is used for any feldspar-bearing rock with interlocking crystals that are large enough to be seen with the unaided eye.) 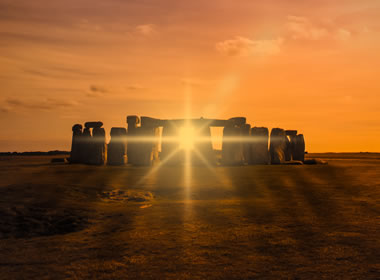 Sunrise at Stonehenge: The standing stones at Stonehenge were placed to be in alignment with sunset on the winter solstice and sunrise on the summer solstice. Photograph copyright iStockphoto / Stephen Barnes.

Diabase played an important role in the construction of Stonehenge, one of the most famous and recognizable stone structures in human history. The diabase “bluestone” pillars that were initially used for the structure’s inner circle were brought to the site around 2100 BC - about 4,000 years ago.

Stonehenge was built in Wiltshire, England, but the diabase pillars came from the Carn Meini Quarry in the Preseli Mountains of southwestern Wales. The pillars weighed up to 4.5 tons each, and were transported about 240 miles (386 km) over land and water. Needless to say, it was a monumental task to bring about 80 of these large, heavy stones across such a great distance. To warrant this effort, a special significance must have been placed on this particular type of rock.