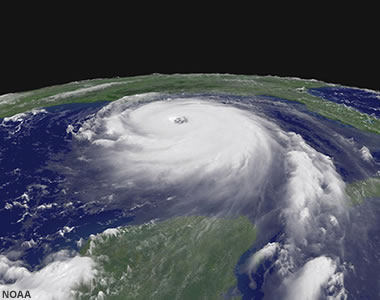 How Big of a Storm Gets a Name?

When a storm becomes a hurricane, it retains the name that it was given as a tropical storm. The World Meteorological Organization has six lists of storm names which are recycled every six years. The name lists for 2017 through 2027 are shown in the tables on this page.

If there are more than 21 named storms in a given year, there is a supplemental list of 21 names that are used. In the past, the Greek alphabet was used for subsequent storms, but this proved to be confusing because several of the names sound very similar. This system was retired in 2021 and replaced with the list of supplemental names shown near the bottom of this page.

In the tables on this page, you can see that the name list from 2019 is nearly identical to the list that will be used in 2025. This shows how the name lists are recycled every six years.

However, if you compare the names in the lists, you will see that Dorian will not be reused in 2025. That hurricane was so deadly and damaging that the World Meteorological Organization decided that reuse of its name would be insensitive. That name was permanently retired from use.

Tropical storms in other basins such as the eastern and western Pacific Ocean are also given names. Name lists for these tropical storms have been compiled by the National Hurricane Center and can be viewed on their website.