Political and physical maps of Asia prepared by the Central Intelligence Agency of the United States. 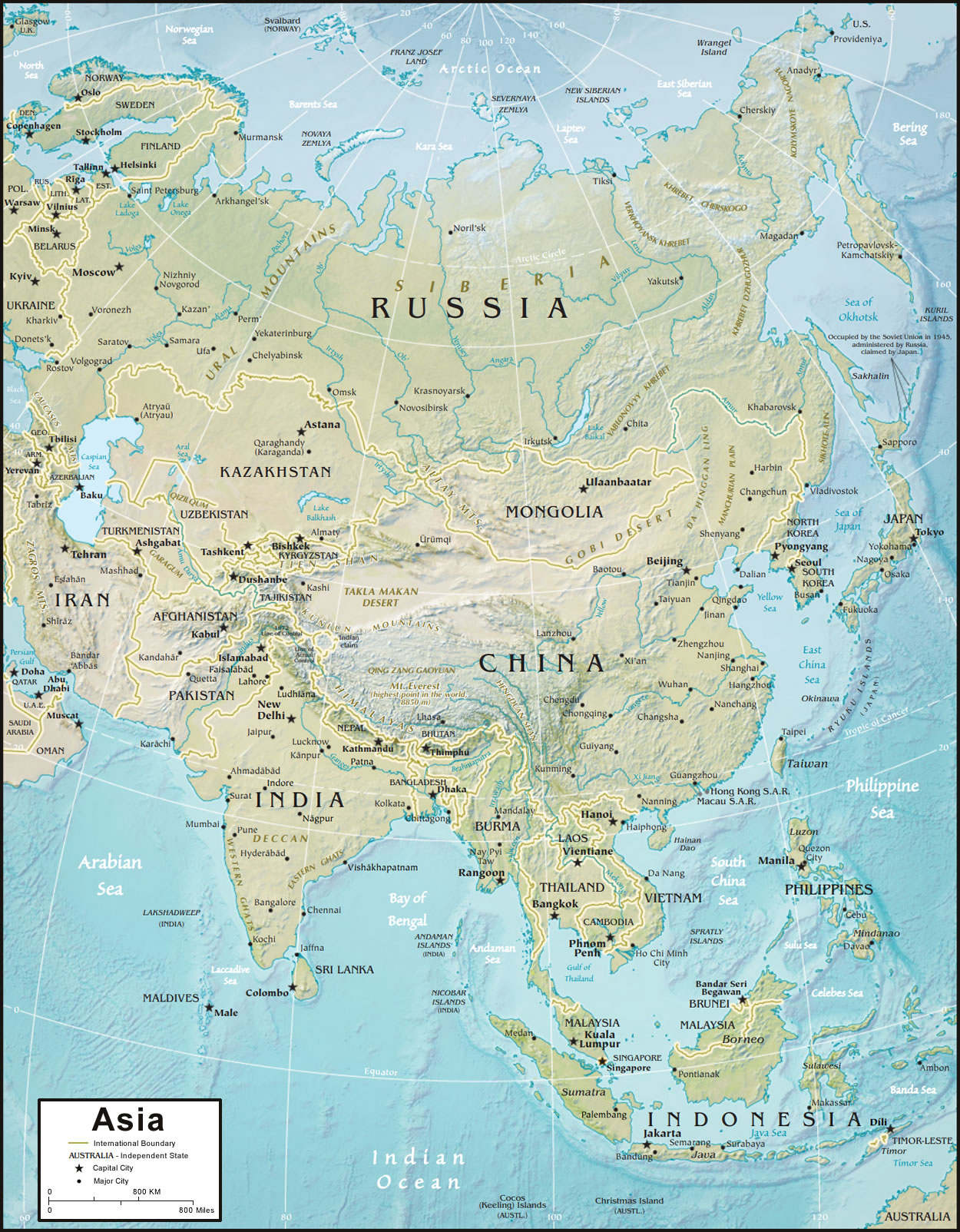 This physical map of Asia shows the continent in shaded relief. Perhaps the most striking feature of the map is the dark brown region in southern China, which indicates the high elevation of the Kunlun Mountains, the Plateau of Tibet, and the Himalayan Mountains. These features were formed millions of years ago, when the Indian land mass collided with the Eurasian plate. You can also see the Ural Mountains trending north to south; they mark part of the conventional boundary between Asia and Europe.

Google Earth is a free program from Google that allows you to explore satellite images showing the cities and landscapes of Asia and the rest of the world in fantastic detail. It works on your desktop computer, tablet, or mobile phone. The images in many areas are detailed enough that you can see houses, vehicles and even people on a city street. Google Earth is free and easy-to-use.

Asia on a World Wall Map:

Asia is one of 7 continents illustrated on our Blue Ocean Laminated Map of the World. This map shows a combination of political and physical features. It includes country boundaries, major cities, major mountains in shaded relief, ocean depth in blue color gradient, along with many other features. This is a great map for students, schools, offices and anywhere that a nice map of the world is needed for education, display or decor.

If you are interested in the geography of Asia, our large laminated map of Asia might be just what you need. It is a large political map of Asia that also shows many of the continent's physical features in color or shaded relief. Major lakes, rivers, cities, roads, country boundaries, coastlines and surrounding islands are all shown on the map.

Map of the Asian Continent:

In this map of Asia, the continent is bisected by the 90 degrees east longitude line. It is a two-point equidistant projection with loci at 45 degrees north, 40 degrees east; and, 30 degrees north and 110 degrees east. Distances from these two points to any location on the map are correct. National Geographic has used this projection for all maps of Asia in their atlases since 1959. This type of map was selected to minimize distortion across the continent. It nicely shows all of Asia, the Middle East, most of Europe, and parts of Africa, Indonesia and Australia.