The Geology of Pluto

"Pluto is showing us a diversity of landforms and complexity of processes that rival anything we've seen in the solar system." - Alan Stern, New Horizons Principal Investigator. 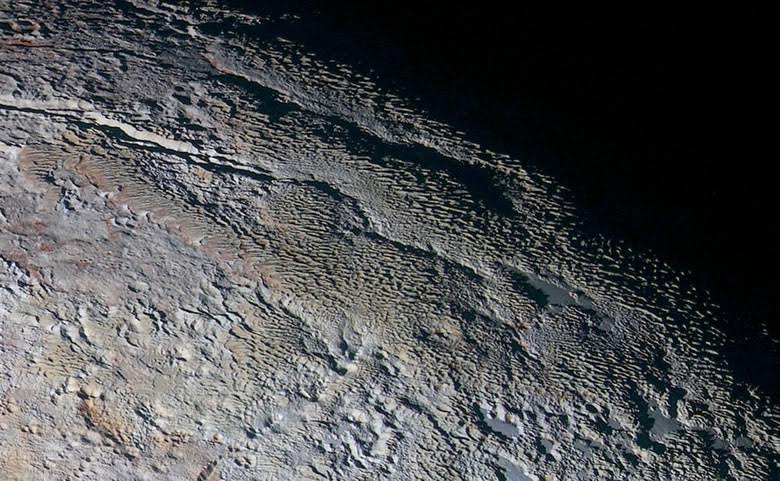 Snakeskin topography on Pluto: Scientists at NASA don't know how to interpret the geology of a recent image of Pluto that shows a 300-mile-wide scan of landscape. William McKinnon, Geology, Geophysics and Imaging team deputy lead, said "It looks more like tree bark or dragon scales than geology. This'll really take time to figure out; maybe it's some combination of internal tectonic forces and ice sublimation driven by Pluto's faint sunlight." Enlarge image. 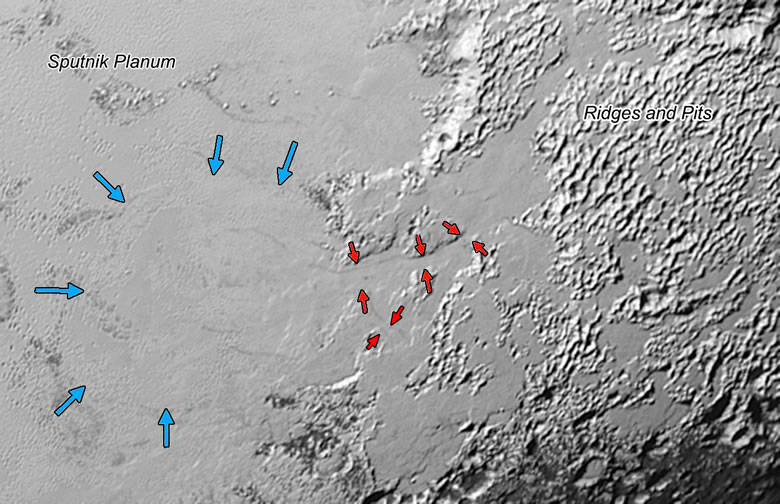 Glacier on Pluto: Valley glaciers, probably composed of nitrogen ice, flow out of a mountainous area on the right side of this image and onto a flat plain of nitrogen ice that is known as the Sputnik Planum. The sides of the valleys are marked with opposing red arrows. The blue arrows outline the outflow margin of the glacier. Image by NASA, released on September 17, 2015. Enlarge image. 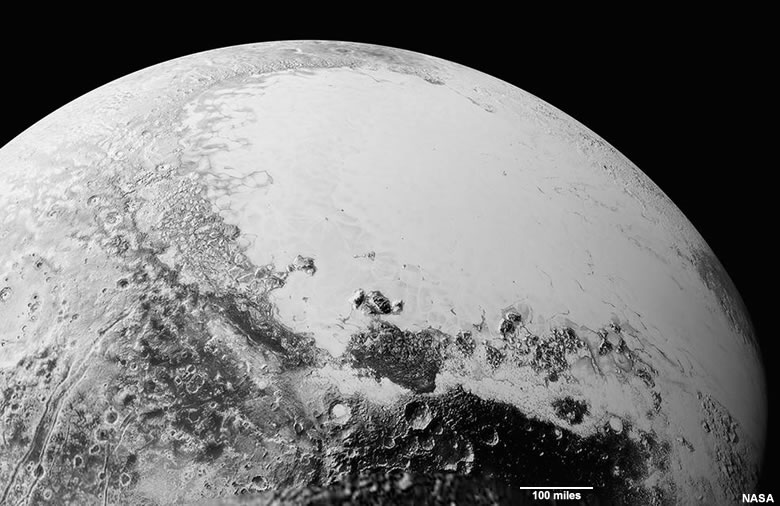 Detailed image of Pluto: Early detailed images of Pluto from NASA's New Horizons spacecraft reveal a variety of surprising and complex landforms and features. This view, which spans about 1100 miles across Pluto, was made from a mosaic of high-resolution images. It shows much of Pluto's northern hemisphere. The dominant area in this image is the great, smooth, icy plain, known as the "Sputnik Planum," which occupies most of the right side of this image. It is thought to be covered with nitrogen ice flows. It is thought to be a relatively young feature because it has very few impact craters. South of Sputnik Planum and along the bottom margin of the image is a dark, heavily impact-cratered area named "Cthulhu Regio." It contrasts with Sputnik Planum in both its topography and age. Crater density is so high that they overlap one another. Image by NASA, acquired on July 14, 2015. Enlarge image. 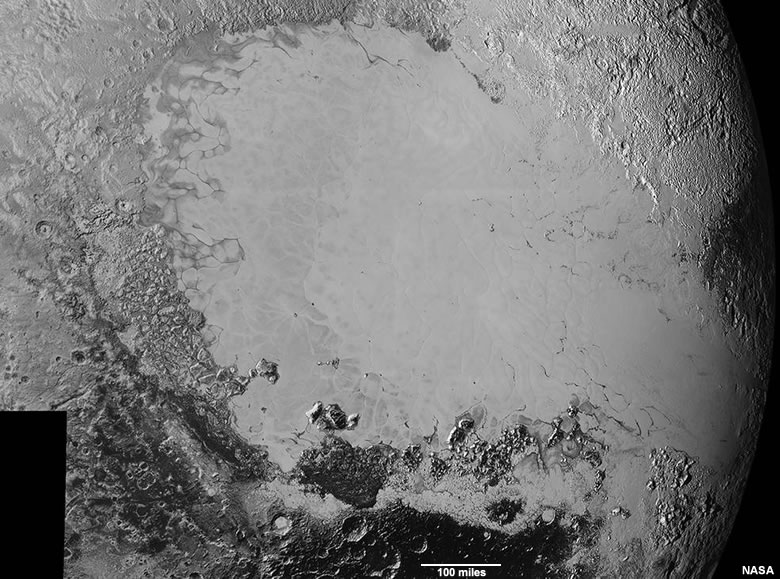 Sputnik Planum: This image is a view of the Sputnik Planum ice plain from almost directly overhead. The ice plain appears to be divided into a large number of smaller polygons and is surrounded by a diversity of landforms. Image by NASA, acquired on July 14, 2015. Enlarge image. 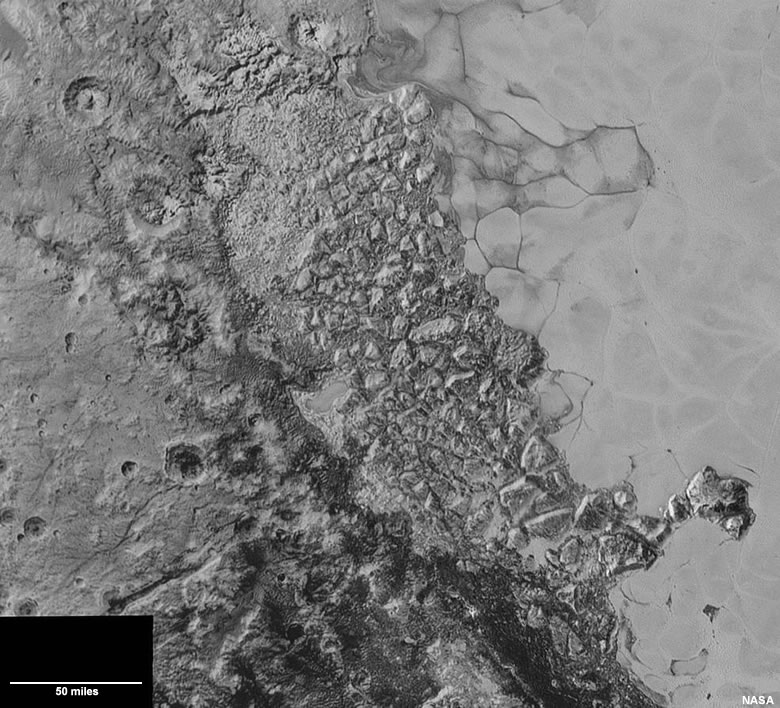 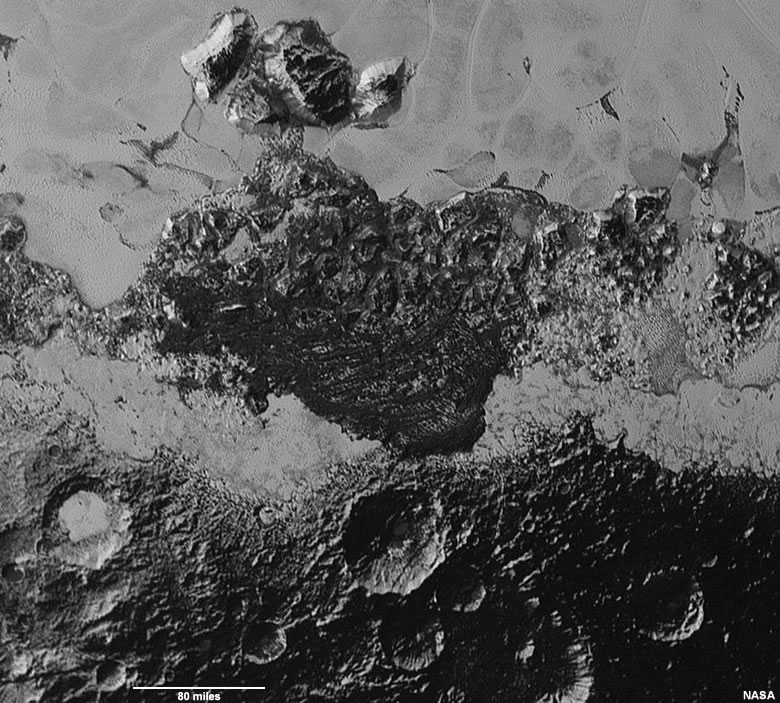 Cthulhu Regio: This image is a close-up of Cthulhu Regio, the heavily cratered, mountainous region south of Sputnik Planum. In the east-central part of the image is a light and dark area with a rippled texture. NASA researchers speculate that it is a dune field. Dunes on the surface of Pluto are entirely unexpected because its atmosphere is very thin. The thin atmosphere would make it unlikely that winds are strong enough to pick up and carry sand grains. However, if they are dunes, it suggests that Pluto had a denser atmosphere earlier in its history or that processes unknown on Earth may operate on Pluto. One large impact crater on the west side of the image may contain a lake of nitrogen ice. Image by NASA, acquired on July 14, 2015. Enlarge image. 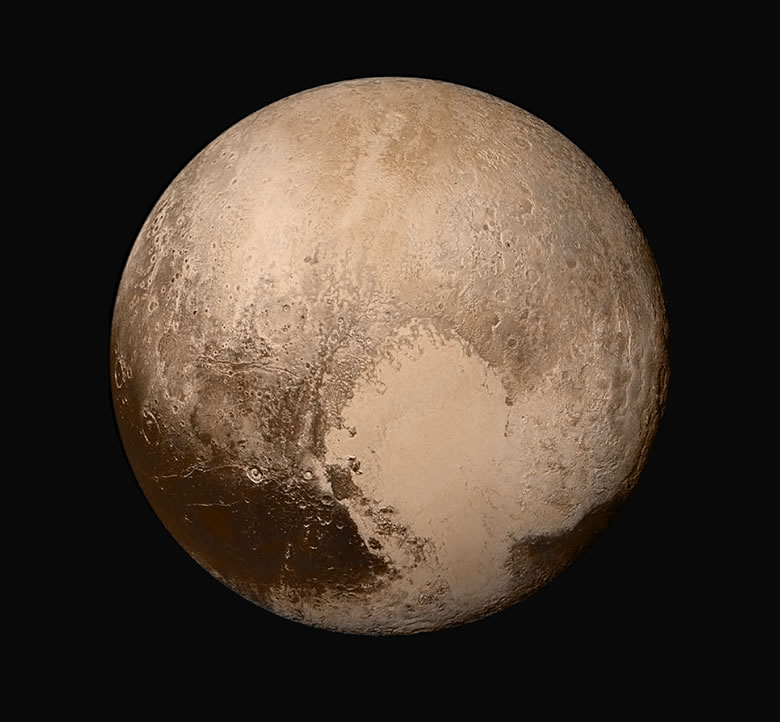 True-color image of Pluto: This enhanced image is thought to show the true color of Pluto's surface. It was created by combining data from four different images obtained while the New Horizon's spacecraft was still about 280,000 miles from Pluto. The smallest features visible on the surface are about 1.4 miles across. Image by NASA, released on July 25, 2015. Enlarge image. 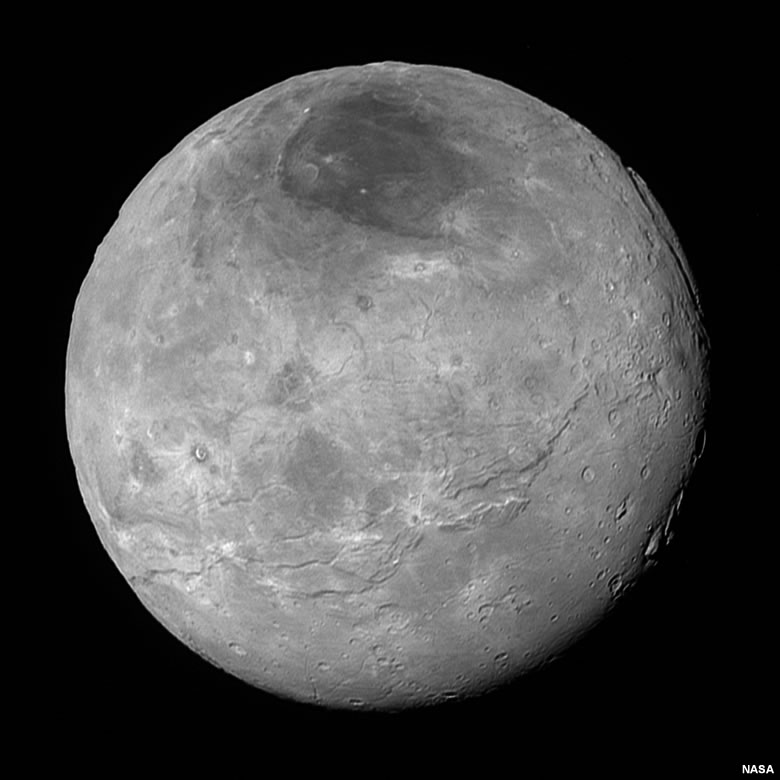