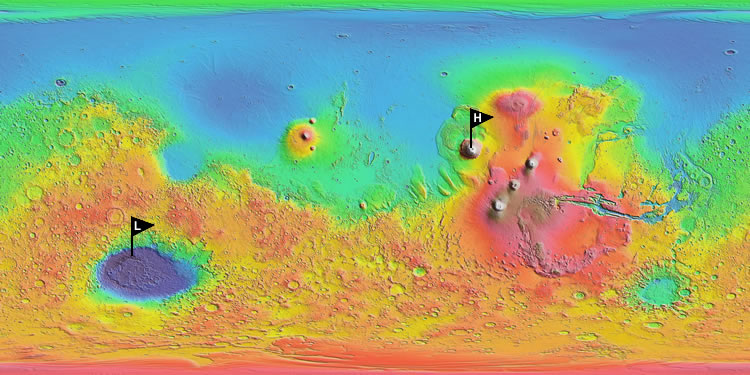 The Highest and Lowest Points on Mars: The image above is a colorized topographic map of Mars. It shows low elevations as a deep blue color and high elevations as a white color. The highest point on Mars is the Olympus Mons Volcano. The lowest point is within the Hellas Impact Crater.

Pictures of the Universe Views of the most interesting objects in our universe by NASA.
Life on Europa?

Life on Europa could exist in a salty ocean deep below its frozen surface.
Moon Structure

Moon's Internal Structure The Moon has a structure similar to earth and an iron-rich core.
Gems from Space

Meteorites - Rocks that were once parts of planets or large asteroids.
Near-Earth Asteroids

Near-Earth Asteroids Since Earth formed it has been hit with rocks from space.
Diamonds In Space

Diamonds In Space Diamonds have been found in meteorites and other celestial bodies.
Volcanoes in Space

Active Volcanoes in other parts of the solar system are different from those on Earth.
Who Owns the Moon?

Who Owns the Moon? Does the U.S. have any claim to the Moon, asteroids or planets?
Volcanoes on Mars

Olympus Mons is the highest point on Mars and largest volcano in the solar system.
Geology of Pluto

The Vredefort Crater is the largest and 2nd oldest impact crater visible on Earth.
Rocks on Mars

Rocks on Mars Many of the rocks found on Mars are not very different from Earth rocks.
Lunar Rift System

Lunar Rift System? Gravity maps revise the geologic history of the near side of the moon.
Volcanoes on Venus

Volcanoes on Venus? The surface of Venus is covered by lava flows and shield volcanoes.
Asteroids and Earth

Earth-Crossing Asteroids Can we do anything about an asteroid that is might hit Earth?
Olivine Rain?

Vesta Meteorites About 5% of the meteorites found on Earth are from the asteroid Vesta.
Geology Tools