Home » Astronomy and Space » Who Owns the Moon?

Who Owns the Moon?

Does any country, company, or individual have the right to own celestial bodies or their minerals? 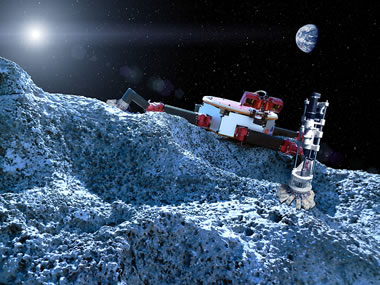 Lunar Mining: Will it someday be possible to mine mineral resources on the Moon, other planets or an asteroid and deliver them to Earth at a profit? NASA image.

People of Earth have not yet established who owns the Arctic. Native people in the United States, Australia, Brazil and many other countries have moral, if not legal claims to massive tracts of land. Asian nations dispute the sovereignty of islands in the Sea of Japan, the South China Sea and other bodies of water. These are only three examples of the many long-standing disagreements over earthly real estate.

With that complexity here on Earth, how can the ownership of planets, asteroids, or their mineral rights be determined fairly? 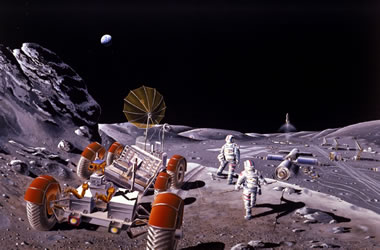 Mining for Mission Sustainability: Long-duration missions to moons or planets may require more oxygen and water than can be transported there. Astronauts might operate small mining and processing operations that dig up rock materials and remove their oxygen and moisture for human consumption. NASA image.

The first international effort to address celestial real estate ownership was in 1967 when the United Nations sponsored the Outer Space Treaty (formally known as Treaty on Principles Governing the Activities of States in the Exploration and Use of Outer Space, including the Moon and Other Celestial Bodies). This treaty dedicated space as the "province of all mankind". It prohibited any nation from claiming territory in space. The Treaty was ratified by 102 countries, including the United States and all other nations with an active space program. It is a weak treaty because any nation can withdraw by serving one year's notice. [1]

In 1979, the Agreement Governing the Activities of States on the Moon and Other Celestial Bodies (also known as the "Moon Treaty") was put forward by the United Nations. Its goal was to place control of the Moon and other celestial bodies into the hands of the international community.

Under the treaty, any use of the Moon should benefit all states and all peoples. No country should use the Moon or its resources without the approval or benefit of all nations. This is a failed treaty because it was ratified by only 16 nations, none of which have an active space program. [2]

Today nations and companies have hopes of mining asteroids and bringing rare minerals back to Earth. Others hope to establish space colonies that subsist by mining and extracting oxygen and water from the rocks of celestial bodies. The question of "Who owns the mineral rights?" is another step beyond "Who owns the land?" and "Who owns that asteroid?".

To make these ventures legally possible in the United States, the Senate passed the Space Act of 2015 (U.S. Commercial Space Launch Competitiveness Act) on November 10, 2015 by unanimous consent. It passed the House of Representatives on May 21, 2015. This bill creates legal rights for United States citizens to own resources in space, bring them back to Earth, and sell them for personal gain. It also indemnifies commercial space launches through 2025.

The bill does not include any provision for asserting sovereignty or claiming exclusive rights to any celestial body. It is a simple declaration that Americans will have the right to explore, extract, and export the resources of other worlds. [3]

So, nobody will own the Moon or other celestial bodies yet - at least not legally. The author's personal opinion is that no one will mine the Moon or an asteroid, bring salable commodities back to Earth, and earn a profit on that activity in his lifetime. The only exception would be if the government heavily subsidizes the mission, or if the imported goods sell in the collectibles or museum markets for incredible prices.

People have been claiming to "own the Moon" since at least 1756 when the emperor of Prussia granted the Moon to Aul Jurgens. [4] More recently, entrepreneur Dennis Hope declared himself to be the owner of the Moon. He began selling lunar real estate and issuing deeds in 1995 for prices of up to $20/acre (discounts given to those who buy serious acreage).

Mr. Hope's ownership of the Moon and his right to sell it might not be illegal and might not be legal - but he has been doing it for over twenty years. Most people who buy his celestial properties probably enjoy the novelty of "owning a piece of the moon" or giving a deed as a gag gift.

What is the difference between Mr. Hope's lunar deeds and the celestial mineral grants issued by the U.S. Congress? Are they both arbitrary proclamations intended to benefit a specific person or specific group of people? They both seem contrary to the intentions of the United Nations and the Outer Space Treaty ratified by the United States in 1967.