Who Owns the Arctic Ocean?

The Law of the Sea: This video gives a good basic description of how The Law of the Sea will be used to divide the Arctic Ocean among several competing nations. A YouTube video from the Al Jazeera channel.

An Energy and Mineral Resource Treasure

Who owns the Arctic Ocean and any resources that might be found beneath those waters? This question has enormous economic significance. The United States Geological Survey estimates that up to 25% of the world's remaining oil and natural gas resource might be held within the seafloor of the Arctic Region. Significant quantities of other mineral resources might also be present. Control of Arctic resources is an extremely valuable prize. These resources become more accessible as global warming melts the sea ice and opens the region to commercial navigation. 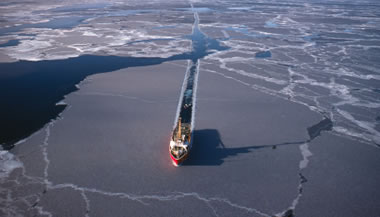 Freedom of the Seas

Since the seventeenth century a "freedom of the seas" doctrine was accepted by most nations. This doctrine limited a nation's rights and jurisdiction to the narrow area of sea along the nation's coastline. The remainder of the ocean was considered as common property that could be used by anyone. This was before anyone had the ability to exploit offshore resources.

Then in the mid-1900s, concerns that long-distance fishing fleets were depleting coastal fish stocks triggered a desire in some nations to have greater control over their coastal waters. Then oil companies became capable of drilling in deep water, and ideas for the seabed mining of manganese nodules, diamonds, and tin-bearing sands started to seem possible. Any nation that claimed a greater distance from shore also made claim to valuable seafloor resources.

In 1945, the United States announced that it assumed jurisdiction of all natural resources out to the edge of its continental shelf. This was the first nation to depart from the freedom of the seas doctrine, and other nations quickly followed. Nations began making unilateral claims to seafloor resources, fishing grounds, and exclusive navigable zones. 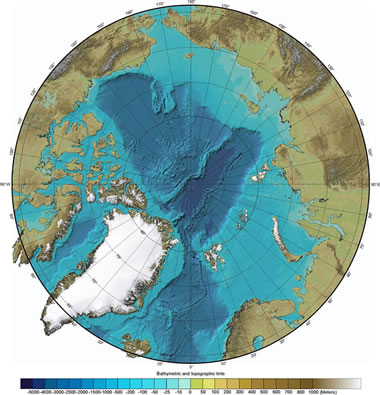 The United Nations sought to bring order and equity to the diversity of claims being made by nations around the world. In 1982 a United Nations treaty known as "The Law of the Sea" was presented. It addressed navigational rights, territorial waters limits, exclusive economic zones, fishing, pollution, drilling, mining, conservation and many other aspects of maritime activity. With over 150 nations participating, it was the first attempt by the international community to establish a formal agreement on how the seas can be used. It also proposes a logical allocation of ocean resources.

Under the Law of the Sea, each country receives exclusive economic rights to any natural resource that is present on or beneath the sea floor out to a distance of 200 nautical miles (230 miles / 371 kilometers) beyond their natural shorelines. In the Arctic, this gives Canada, the United States, Russia, Norway and Denmark a legal claim to extensive sea floor areas that might contain valuable resources. (As of April 2012, the United States had not yet ratified the Law of the Sea treaty. Those who have opposed ratification say that it would limit United States sovereignty).

The International Boundaries Research Unit at Durham University has prepared a map showing the potential maritime jurisdiction and boundaries of the Arctic region if the Law of the Sea treaty is put fully into effect. 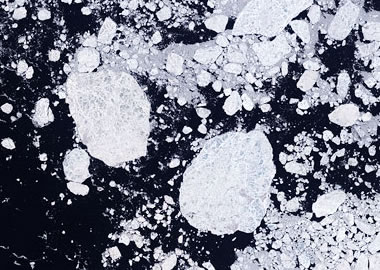 Landsat image of Arctic sea ice. Much of the Arctic is covered by ice, but global warming is reducing its thickness and extent. Image credit: NASA.

In addition to the 200 nautical mile economic zone, each country can extend its claim up to 350 nautical miles from its shoreline for those areas that can be proven to be an extension of that country's continental shelf. To make this claim, a nation must acquire geological data that documents the geographic extent of its continental shelf and submit it to a United Nations committee for consideration. Most countries with a potential claim to the Arctic are currently mapping the seafloor to document their claim.

Who Owns the Lomonosov Ridge?

One feature of the Arctic Ocean that is of special note is the Lomonosov Ridge, an underwater ridge that crosses the Arctic Ocean between the New Siberian Islands and Ellesmere Island. Russia is trying to document that the Lomonosov Ridge is an extension of the Asian continental shelf, while Canada and Denmark (in regards to Greenland) are trying to document that it is an extension of the North American continental shelf. Any country that can successfully establish such a claim will gain control of a vast amount of seafloor resources in the central portion of the Arctic Ocean.

In the future, as sea levels rise, current shorelines will migrate inland and the 200 nautical mile economic zone will move inland with them. In areas with gently sloping coastal land, this landward advance of the sea could be a significant distance. Perhaps those nations should exploit their most seaward resources first?

In summary, the Law of the Sea Treaty grants significant undersea portions of the Arctic to Canada, the United States, Russia, Norway and Denmark. These nations gain claim to the natural resources on, above and beneath the ocean floor up to 200 miles from their shoreline. They can also extend their claim up to 350 miles from shore for any area that is proven to be a part of their continental shelf. All of these nations have gained significant oil and natural gas resources as a result of this treaty.