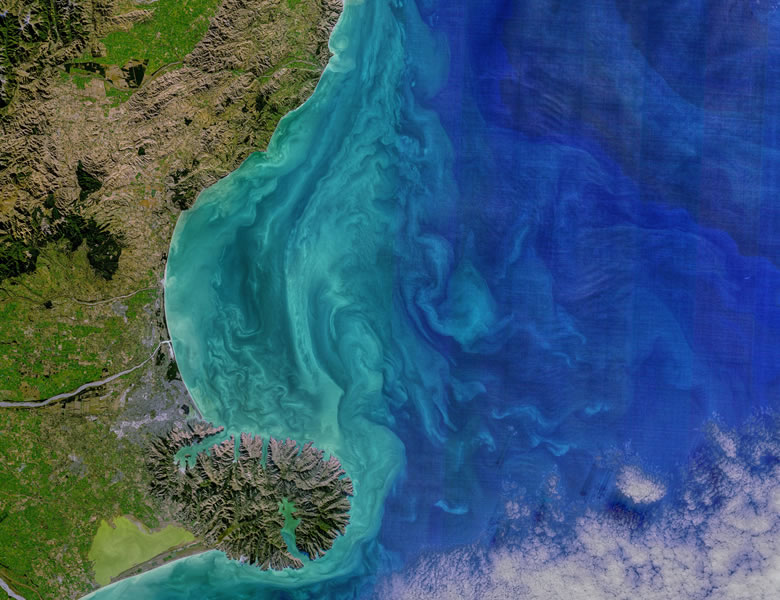 Swirls of color, caused by phytoplankton blooms, make an interesting and beautiful scene off the eastern shore of South Island, New Zealand. The Banks Peninsula can be seen in the southwestern corner of the image and the city of Christchurch borders the coastline immediately north of the peninsula. Lake Ellesmere, pea-green with algal growth, is a lagoon behind a spit on the southeastward facing shore. NASA acquired this satellite image on May 29, 2021. This satellite image was prepared for publication by NASA Earth Observatory. [12] 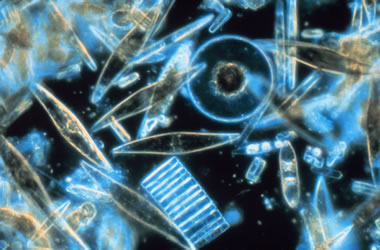 Phytoplankton Through a Microscope: This photograph shows numerous types of microscopic plant-like organisms known as diatoms. Diatoms are a common member of the phytoplankton populations that live and drift in the sunlit waters of the ocean surface. Many of them have a thin silica shell, known as a "test", and contain chlorophyll. During a bloom, billions of diatoms in the water cause it to appear bluish green to green in color. When they die, their bodies sink to the bottom and contribute silica and organic carbon to the bottom sediment. If preserved, these sediments can form a rock known as diatomite. [2]

What Is A Phytoplankton Bloom?

Phytoplankton are microscopic plant-like organisms that grow, multiply, and drift in the sunlit surface waters of most bodies of water on Earth. The name “phytoplankton” is a combination of two Greek words: “phyton” (which means “plant”) and “planktos” (which means “drifter”).

Normally phytoplankton are present and abundant in sunlit surface waters, but they are usually unnoticed by people on shore, passing by in boats, or flying over in aircraft. However, when conditions of temperature, sunlight, and water composition are perfect, explosive growth and procreation increase their numbers exponentially. These periods of explosive growth produce a green or turquoise color in and on the water, known as a “phytoplankton bloom”. 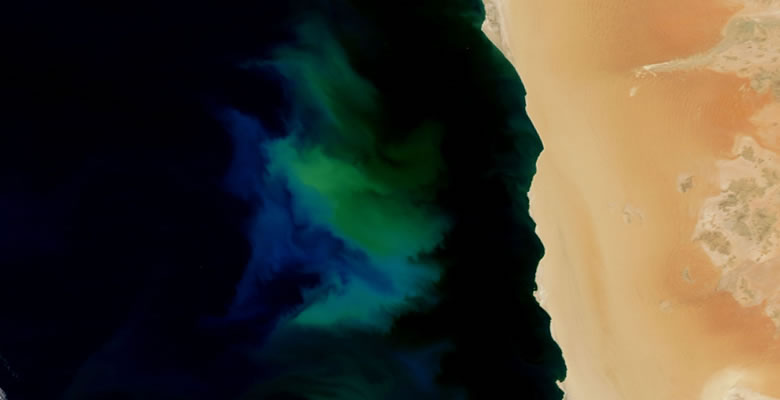 This satellite image features a phytoplankton bloom that developed in the Atlantic Ocean off the coast of Namibia in 2008. The bloom first appeared about October 28 and began to dissipate by November 14. The typical phytoplankton bloom lasts just a few weeks or less. Blooms are frequent off the cost of Namibia because deep ocean currents deliver cold, nutrient-rich waters from the Southern Ocean near Antarctica. The currents encounter the continental shelf, and the water is pushed up the continental slope towards the surface. Often the blooms grow so aggressively that decomposition of deceased plankton bodies consumes so much oxygen that a "dead zone" develops in these areas. This satellite image was prepared by NASA Earth Observatory. [1] 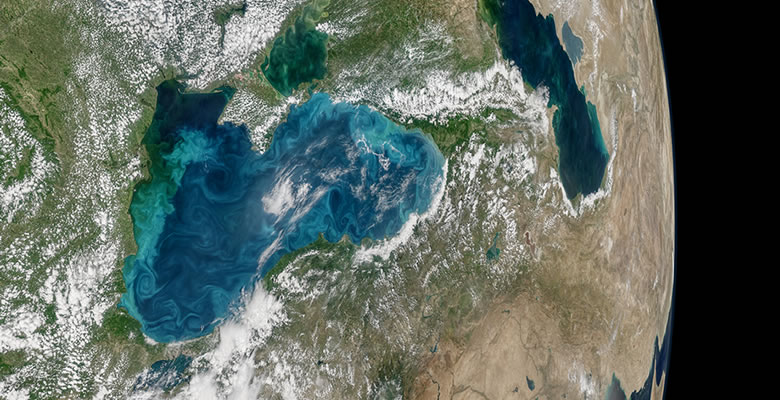 On May 29, 2017, the Danube River, the Dnieper River and other streams that empty into the Black Sea flooded and overflowed their banks onto agricultural lands. The streams' waters picked up topsoil, surface sediments, fertilizer, and animal waste, and carried them into the Black Sea. This surge of dissolved iron, nitrogen, and phosphate in these waters triggered an explosive growth of phytoplankton in the Sea, producing the numerous blooms seen in the satellite image above. This NASA satellite image was prepared by Norman Kuring. [12] 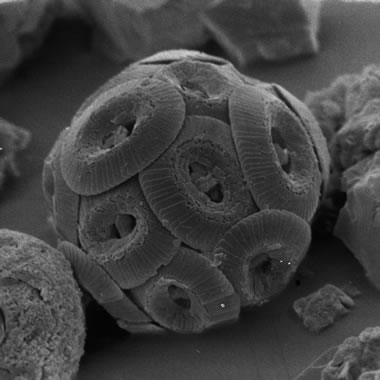 Phytoplankton Through a Microscope: This photograph shows a coccolithophore, a one-celled, plant-like organism that lives a planktonic life in the shallow, sunlit waters of the ocean or other water bodies. Coccolithophores secrete and surround themselves with up to thirty plate-like scales composed of calcium carbonate, which are each just a few microns across. During a bloom, billions of drifting coccolithophores can cause the water to appear a very light turquoise color as sunlight strikes and reflects from their scales. When they die, their bodies sink to the bottom and contribute calcium carbonate to the bottom sediment. [3] Creative Commons image by Hannes Grobe.

The Importance of Phytoplankton

Both types of phytoplankton contribute dissolved carbon dioxide to the deep ocean water and organic-derived carbon to the sediment mass. This carbon can be locked in the deep ocean water and seafloor sediments for millions of years. As a result, the ocean becomes a carbon sink. In this way, phytoplankton remove carbon dioxide, a greenhouse gas, from near-surface waters and prevent it from entering the atmosphere. This removal of carbon helps regulate the carbon dioxide content of the atmosphere and, through that, regulates global temperatures.

A satellite image of a phytoplankton bloom that formed off the eastern coast of New Zealand. This bloom grew explosively between October 11 and October 25, 2009. A competition between winds and currents carried the plankton across hundreds of kilometers of the ocean’s surface to form intricate swirls and patterns. The bloom contained so many microscopic organisms that it could be clearly seen from space. This NASA satellite image was prepared by Robert Simmon and Jesse Allen. [5] 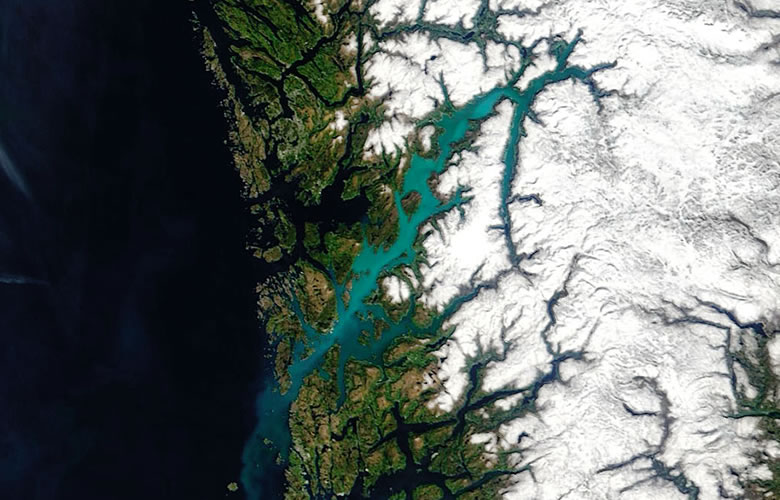 In this satellite image, a bloom of Emiliania huxleyi, a single-celled phytoplankton about 1/10th the size of a human hair, has turned the water of Hardangerfjord, Norway a turquoise color on May 30, 2020. E. huxleyi is an abundant species of coccolithophore. It produces a shell composed of highly reflective calcium carbonate. Its reflectivity is what enables such a small organism to turn the apparent color of a body of water from a very dark blue to a milky turquoise. This satellite image was prepared by NASA Earth Observatory. [11]

Where Do Phytoplankton Blooms Occur?

Phytoplankton blooms are most frequent in waters with a thriving marine population and where abundant nutrients needed for phytoplankton growth are added in a continuous stream, or in surges. These are often areas along the edges of continents where nutrients are supplied through river runoff, or where cold nutrient-rich waters from ocean depths rise to the surface. Blooms can also occur in freshwater bodies and are often triggered by agricultural runoff. When conditions are perfect, the abundant nutrient supply feeds the plankton’s explosive growth into a bloom. 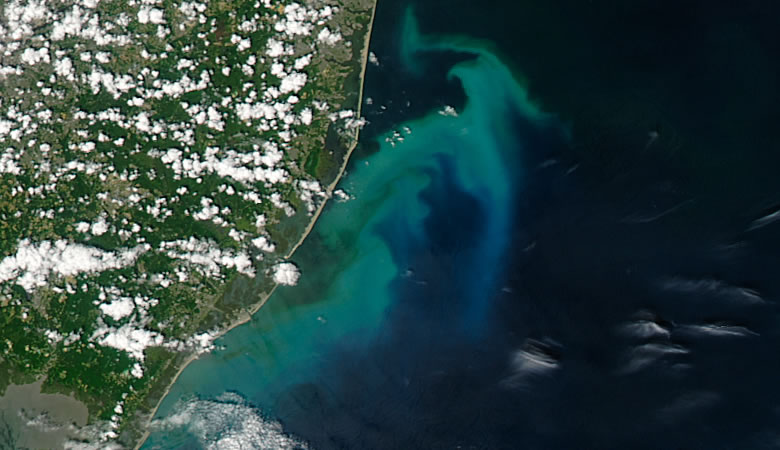 An unusual phytoplankton bloom occurred in the Atlantic Ocean off the coast of New Jersey on July 6, 2016. This bloom received nutrients from a process known as "upwelling". Strong, persistent winds, blowing off the continent and towards the east, carried surface waters away from the coast. This brought cold, nutrient-rich waters up the continental slope to replace the waters that were blown out to sea. The result was a near-shore phytoplankton bloom. Similar blooms occur periodically along the Atlantic coast in the summer. This NASA satellite image was prepared by Jeff Schmaltz. [6] 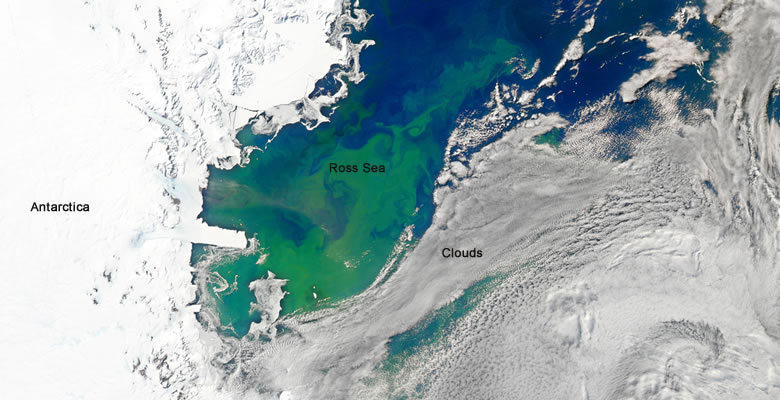 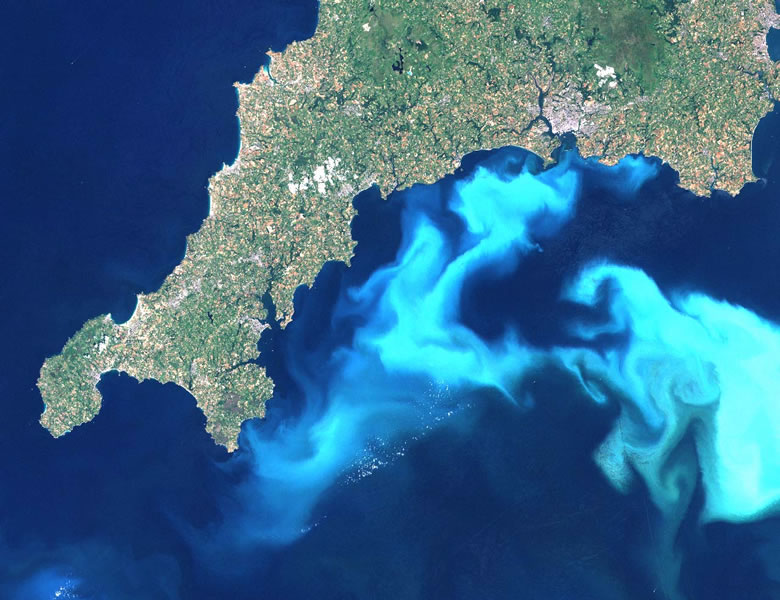 This satellite image shows a milky white phytoplankton bloom in the English Channel off the southwestern tip of England. This plume was captured in a Landsat image on July 24, 1999. It is noteworthy because of its milky turquoise color, which is a result of sunlight reflecting from billions of coccolithophore (Emiliania huxleyi) scales, which are composed of white calcium carbonate. This Landsat image was prepared by Steve Groom of the Plymouth Marine Laboratory. [8] 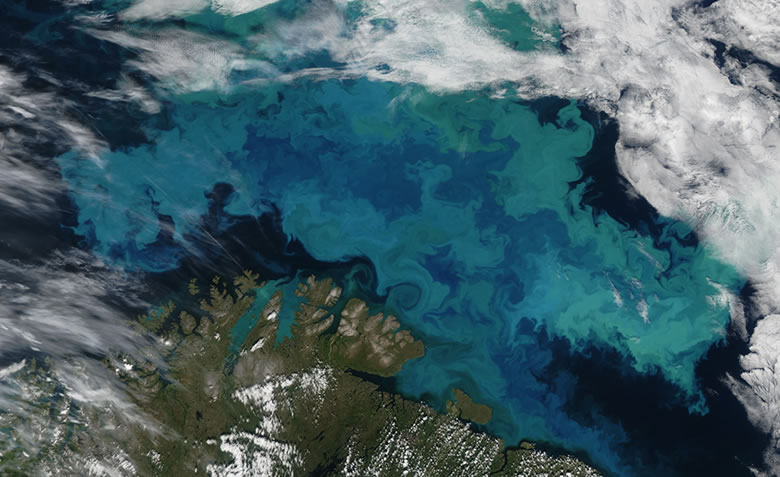 This satellite image shows a phytoplankton bloom in the Barents Sea off the coast of northern Norway and northwestern Russia on August 14, 2011. Every spring plankton blooms span hundreds of miles across these coastlines. The blooms are triggered by spring stream runoff, but more importantly by the 24-hour periods of sunlight that occur each spring. Color variations in the plume are caused by different water depths (the coccolithophores in the plume can live at depths of up to 50 meters below the surface) and different phytoplankton concentrations. The patterns in the plume are caused by changing wind and current action. In this part of the Arctic Ocean, diatom blooms usually peak in May and coccolithophore blooms peak in June. This NASA image was prepared by Jeff Schmaltz. [9] 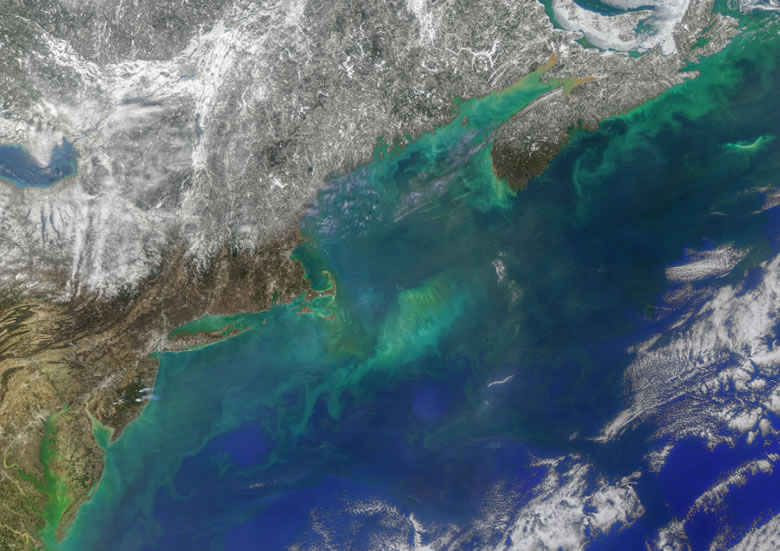 Spring weather in the Northern Hemisphere produces colorful blooms of phytoplankton swirling off the eastern coast of North America, from the Delmarva Peninsula of the United States (lower left) to Nova Scotia, Canada upper right. [10]