Oil and Natural Gas Resources of the Arctic 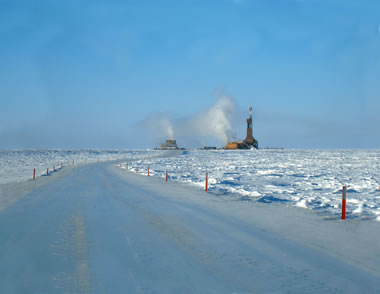 Ice road to an oil rig: Access to drilling sites on land in the Arctic can require building, rebuilding and maintaining many miles of ice roads. There is no other way to get heavy equipment into these sites, and road access can be limited to just a few weeks or few months each year. Bureau of Land Management photo.

The area above the Arctic Circle is underlain by sedimentary basins and continental shelves that hold enormous oil and natural gas resources. Most of this area is poorly explored for oil and natural gas; however, the United States Geological Survey estimates that the Arctic contains approximately 13 percent of the world's undiscovered conventional oil resources and about 30 percent of its undiscovered conventional natural gas resources.

This makes the Arctic an incredibly rich area. It is about the same geographic size as the African continent - about 6% of Earth's surface area - yet it holds an estimated 22 percent of Earth's oil and natural gas resource. [3]

Most of the exploration in the Arctic to-date has taken place on land. This work has resulted in the Prudhoe Bay Oil Field in Alaska, the Tazovskoye Field in Russia and hundreds of smaller fields, many of which are on Alaska's North Slope. Land accounts for about 1/3 of the Arctic's area and is thought to hold about 16% of the Arctic's remaining undiscovered oil and gas resource. [4] 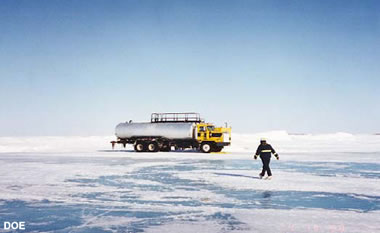 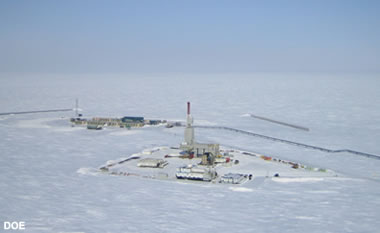 Gas hydrate well: Ignik Sikumi #1 gas hydrate well on the Alaska North Slope. The Arctic has an extensive gas hydrate resource that was not included in the USGS undiscovered oil and gas assessment because gas hydrate is an unconventional resource. Department of Energy photo.

Jurisdiction of the Arctic

Their claims to oil and gas beneath the Arctic Ocean seafloor have historically been determined by unilateral decrees; however, the Law of the Sea Convention provides each country an exclusive economic zone extending 200 miles out from its shoreline. Under certain conditions the exclusive economic zone can be extended out to 350 miles, if a nation can demonstrate that its continental margin extends more than 200 miles beyond its shore. Russia, Canada, and the United States are currently working to define the extent of their continental margin.

This provision has led to some overlapping territorial disputes and disagreements over how the edge of the continental margin is defined and mapped. For example, Russia claims that their continental margin follows the Lomonosov Ridge all the way to the North Pole. In another, both the United States and Canada claim a portion of the Beaufort Sea in an area that is thought to contain significant oil and natural gas resources.

Orion Oil Pool Map: Map of the Orion Oil Pool in the Prudhoe Bay Unit. Horizontal well drilling technology has been used extensively to develop this pool. There are currently only five producing wells located on V-Pad, but these five original well bores are fed by 15 additional lateral well branches. 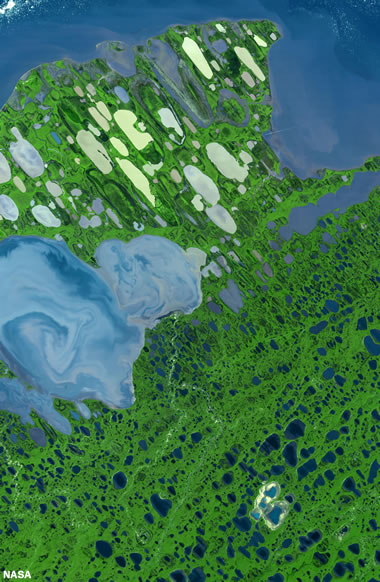 Challenges of Oil & Gas Exploration in the Arctic

The Arctic is a cold, remote, dark, dangerous and expensive place to explore for oil and natural gas. The Arctic's vast oil resource and the high price of oil are what currently attract attention to the Arctic area.

Where ice-free water is available, oil can be produced from a well, placed on a ship and transported to refineries. It can also be transported by pipeline; however, construction of pipelines in the Arctic are projects of enormous difficulty and scale.

Natural gas is much more difficult to transport to market. It has a much lower energy density and must be supercooled to a liquid for movement by sea. This requires a large, complex and expensive facility that takes several years to design, permit and build. Pipeline construction for natural gas encounters the same expenses and problems as those required to transport oil.

Offshore exploration in the Arctic currently targets oil instead of natural gas. The relative ease of transport is what causes companies to favor oil.

Because of these difficulties and expenses, bringing wells into production in the Arctic requires a very large oil or gas field. The large field is necessary to support the infrastructure required to drill the wells and transport products to market. However, once an initial infrastructure is in place, smaller fields can be developed if the existing infrastructure has the capacity to support them.

Why Arctic Exploration is so Expensive

A short list of reasons why oil and gas exploration in the Arctic is so expensive... [3]