Darvaza Gas Crater:   As you approach you will feel the heat and hear the sound of a thousand dancing flames of natural gas. Local people call this the "Door to Hell". Don't get too close! (Since this photo was taken, the Turkmen government built a low metal fence around the crater and a stone walkway to a patio that overlooks the crater's edge. A photo below shows the metal fence and a new campsite.) Photo by AlexelA / Alamy Stock Photo. 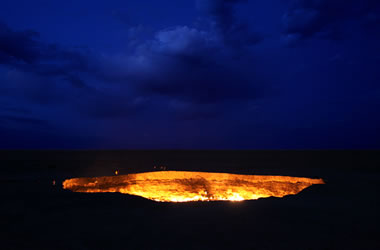 The Door to Hell: The crater, located in north-central Turkmenistan, is about 226 feet (69 meters) across and about 98 feet (30 meters) deep. Photo by Tim Whitby / Alamy Stock Photo.

What is the Darvaza Gas Crater?

The Darvaza Gas Crater is a large crater in the Karakum Desert of north-central Turkmenistan where thousands of flames fueled by seeping natural gas have been burning for decades. The flaming crater's sights and sounds are frightening enough that local people call it the "Door to Hell" or the "Gates of Hell".

Each dancing flame marks the spot where natural gas (methane) emerges from the walls, from the floor, or from the talus piles within the crater. When the natural gas emerges, oxygen in the atmosphere causes it to burst into flames.

People approaching the crater hear the sound of the flames and feel heat that is too intense to stand at some points along the crater's edge. The heat and an odor of combustion can be sensed for some distance downwind.

The crater is located near the village of Darvaza, also known as Derweze, in north-central Turkmenistan - about 160 miles (260 kilometers) north of the Turkmen capital of Ashgabat.

The crater is about 226 feet (69 meters) across and about 98 feet (30 meters) deep. It has an area that would nearly cover ¾ of an American football field - including the end zones. 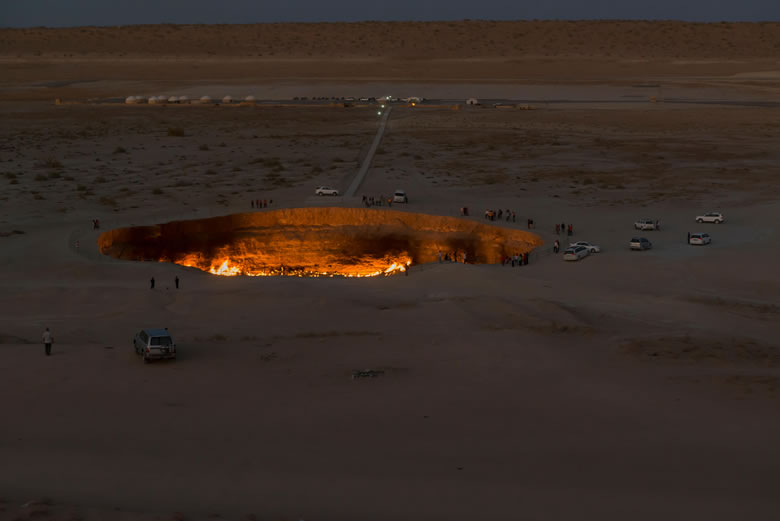 Tourism at Darvaza Gas Crater:   This twilight photo of the Darvaza Gas Crater by Bert de Ruiter in 2019 shows the low fence around the outside of the crater and the walkway/patio to the edge of the crater. Shown in the distance at the top of the photo is a campsite used by tourists who visit the crater. The crater is interesting during the day but it is even more spectacular at night. However, like most other deserts, the Karakum Desert gets really cold at night - so the campsite has small yurts that tourists can use on overnight visits. The Turkmen government hopes that the Door to Hell will generate some tourist traffic. Photo by Bert de Ruiter / Alamy Stock Photo. Click photo to enlarge.

Short Video of Darvaza Gas Crater: This 28-second video lets you see and hear the flames of the Darvaza Gas Crater. The video is by Earth Nutshell, who has an interesting account of their visit to the crater on their website - check it out.

What Causes The Flames?

The flames are caused by natural gas seeping from the surrounding rock into the crater. The gas travels through joints (natural near-surface fractures), permeable rock units, and bedding plane separations.

These are the same pathways that natural gas travels through when entering a drilled well. These delivery paths produce flames along the crater walls and send gas seeping through the talus pile. The result is thousands of small flames throughout the crater. 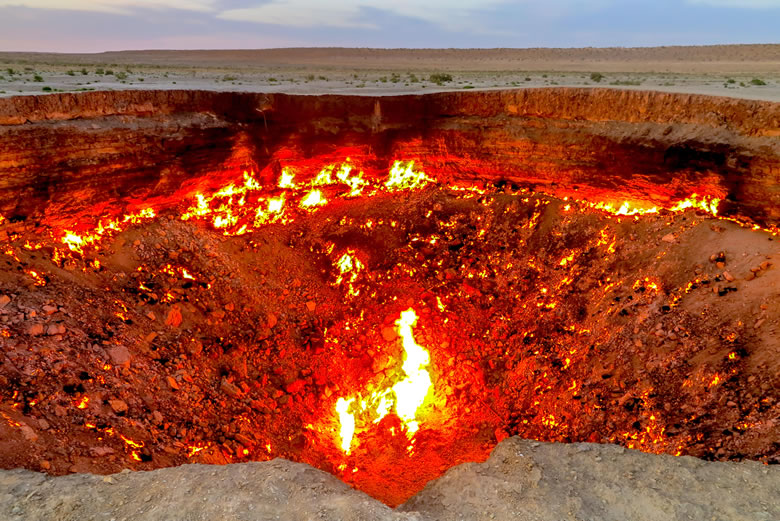 The United States Energy Information Administration (EIA) reports that Turkmenistan had the world's sixth-largest natural gas resource in 2016 and was one of the world's top 15 natural gas producers in 2015.

The country's production is low compared to its resources because there is little domestic demand, and the country lacks the infrastructure needed for vigorous exports. EIA reports that 70% of Turkmenistan's natural gas exports go to China, Russia, and Iran. The rest goes to other countries around the Caspian Sea or in central Asia.

How Did the Darvaza Gas Crater Form?

The origin of the crater is reported as a natural gas drilling accident on Wikipedia.org and many other websites. While these reports are in general agreement, they do not reference any government, historical, or research documents. They also do not provide a statement from a person who witnessed the crater's formation.

The Darvaza Gas Crater is reported to have formed in about 1971 while Soviet geologists were exploring for oil and natural gas. They began drilling and quickly realized that they had penetrated an underground cavern. Then the ground beneath their equipment began to subside.

The crew managed to escape, but their equipment was lost in the collapse. (Remains of what is thought to be the drilling rig are present on one side of the crater.) Talus from the walls and rim of the crater began falling into the crater. This produced the current shape of the crater: vertical walls beneath the rim, and piles of talus around the circumference of the crater that slope toward the crater's center. 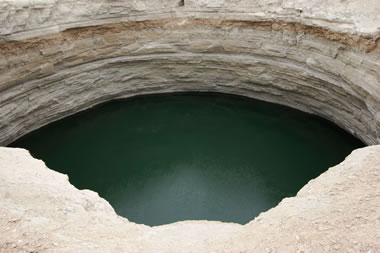 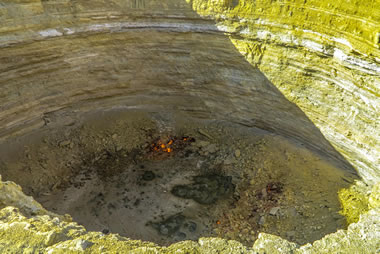 Darvaza Mud Crater: Local people call this sinkhole the "Darvaza Mud Crater". There are other sinkholes in the Darvaza area where pools of viscous mud are churned by a stream of bubbling natural gas. Photo by AlexelA / Alamy Stock Photo. 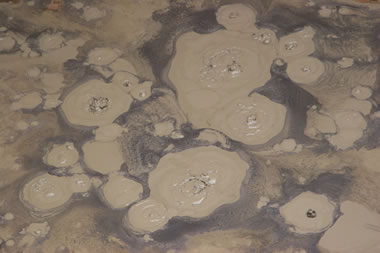 Mud Pot: A mud pot on the bottom of the Davaza Mud Crater being churned by escaping bubbles of natural gas. Photo by Ian Trower / Alamy Stock Photo.

Other Craters at Darvaza

In addition to the Darvaza Gas Crater, there are two similar sinkholes nearby. One is known as the "Water Crater" and the other is known as the "Mud Crater" (see accompanying photos). The water crater normally has water in the bottom, and the mud crater normally has a pool of viscous mud that is stirred by a steady bubbling of natural gas (see accompanying photo). The mud crater sometimes has a small number of gas-fed flames.

All three of the Darvaza craters have vertical walls near the top and talus slopes at the bottom. They appear to have formed from the same geological process. The author believes they are cover collapse sinkholes.

The area around Darvaza is underlain by cavernous limestone, and there are many collapse features within a few miles of the gas crater.

Someone has placemarked the Darvaza Gas Crater in Google Earth, and by clicking the link you can go see it. If you are familiar with using satellite images (or want some experience), you can search the surrounding landscape and look for other sinkholes in this area. The easy ones to find are filled with water. They will appear on the satellite images as tiny black dots (until you zoom in and see that the crater is water-filled). You can also find mud craters and locations where flaming natural gas simply emerges from the ground.

Cover collapse sinkholes generally form where a limestone rock unit at depth is being dissolved and removed by subsurface weathering and erosion. At first, cavities forming in the limestone are overlain by rock layers that are competent enough to support the ground surface. This unstable condition is temporary, and the overlying rock layers will eventually deteriorate and collapse into the voids below. The collapse can be triggered by continued subsurface erosion, an earthquake, vibrations, or, loading of the surface by rain water, construction, or a vehicle like a drilling rig.

Cover Collapse Sinkhole:   This illustration, by the United States Geological Survey, demonstrates how a cover collapse sinkhole might form. Frame 1: The overburden of an underground cavern begins to collapse into the cavern. Frame 2: A cavity begins to form above the rock unit containing the cavern. Frame 3: The cavity above the original cavern enlarges, undermining support for the ground surface above. Frame 4: The roof of the cavity fails and an open sinkhole is now part of the local landscape.

There are several cover collapse sinkhole features in the Darvaza area. They likely formed by a process similar to what is described above. Some of them produce a flow of natural gas that is sometimes aflame.