The Artificial Islands of Dubai

There are hundreds of man-made islands in the Persian Gulf.

A satellite image of Dubai's artificial islands in February 2009. From left to right: Palm Jebel Ali, Palm Jumeirah, and The World. NASA image created by Jesse Allen. Click to enlarge. 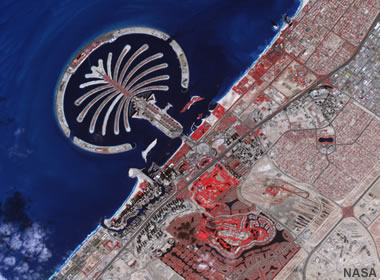 Palm Jumeirah is the world's largest artificial archipelago built for leisure and tourism. Vegetation appears red in this false-color satellite image from 2010. Dubai uses desalination plants to make freshwater for irrigation, and because of this the city has many trees, gardens, and even golf courses. NASA Earth Observatory image created by Jesse Allen. Click to enlarge.

Some of the World's Largest Man-Made Islands

On the coast of Dubai in the United Arab Emirates, some of the world's largest artificial islands are under construction. These include Palm Jumeirah, Palm Jebel Ali, Deira Islands, and The World islands.

Dubai is the most populous city and emirate in the United Arab Emirates. The city is a favorite destination among wealthy tourists, and the islands were constructed in order to create more coastal real estate.

Creation of the islands began in 2001, but so far only the Palm Jumeirah has been completed. With land area of over 1,380 acres (5.6 square kilometers / 2.2 square miles), the Palm Jumeirah is one of the largest artificial islands in the world. [1]

These are not the only examples of innovative land reclamation in the UAE. Other major projects in Dubai include Bluewaters Island (home of the Dubai Eye, the world's largest observation wheel), and the Burj Al Arab Jumeirah (a world-famous luxury hotel that was built on its own artificial island). 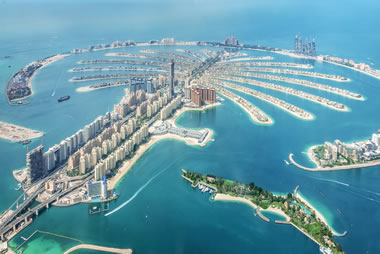 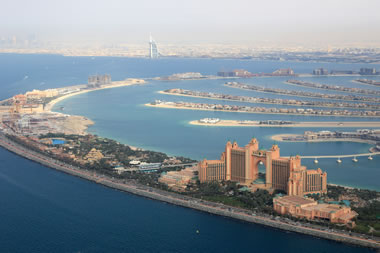 Atlantis, The Palm: An aerial view of Palm Jumeirah with the Atlantis hotel (Atlantis, The Palm) in the foreground. The Burj Al Arab hotel can be seen along the coast in the background. Image copyright iStockphoto / Boarding1Now. Click to enlarge.

The Palm Jumeirah was created in the shape of a palm tree. There is a crescent surrounding the palm which serves as a breakwater structure. Two gaps were made in the crescent to allow for water circulation. The 17 fronds of the palm have rows of luxury villas, and numerous hotels and resorts were built on the crescent. The trunk of the palm has a mixture of retail stores, apartments, and hotels.

The largest hotel built on Palm Jumeirah so far is the Atlantis (shown in accompanying photo). The hotel and adjacent water park cover over 113 acres of land at the top of the crescent. The hotel opened in 2008 and has features which include an aquarium with 65,000 marine animals, a bay and lagoon where guests can interact with dolphins, over 20 restaurants and bars, high-end boutiques, a large spa, "underwater suites" and more.

Over 10,000 people live on the Palm Jumeirah. At present, it is one of the world's largest man-made islands. [2] The Palm Jumeirah and other artificial islands in the Persian Gulf are best viewed from above, and they are a favorite subject for aerial and astronaut photography. 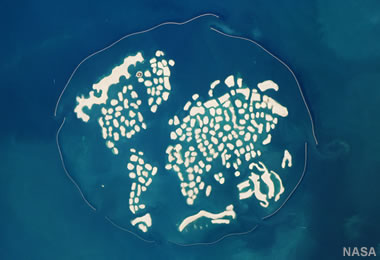 The World islands: This astronaut photograph shows how "The World" looked in 2010. At this time, only Michael Schumacher's island had been developed. Image by NASA / ISS Expedition 22 crew. Click to enlarge.

"The World" is an archipelago of 300 islands which are arranged to resemble a map of the Earth's continents. The idea is that each of these islands will be themed to correspond to a different country or region.

These islands have been partially developed. The first to be transformed was an island in Greenland which was gifted to racing driver Michael Schumacher in 2006. Since then, Lebanon Island has been commercially developed and is used for corporate events and parties. Progress is being made on several islands forming the "Heart of Europe," such as Sweden, Monaco, Netherlands, St. Petersburg, and Honeymoon Island. In the South America region, a portion of Clarence Island has been developed and is home to the Antara World Islands Dubai Resort. The five-star resort has its own private beach, five restaurants, a gymnasium, a spa, and 70 luxurious rooms, suites, and villas to choose from. [3] Additionally, numerous "Floating Seahorse" villas have been completed and made available for sale. [4] 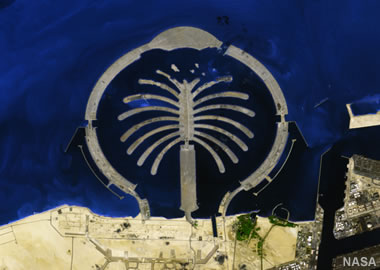 Palm Jebel Ali: A satellite image taken in February 2009. Construction had ceased at this time, and now a decade later, the archipelago still looks much the same. NASA image created by Jesse Allen. Click to enlarge.

The Palm Jebel Ali is similar in shape to the Palm Jumeirah but is about 50% bigger. The palm and crescent structures can be seen in satellite images, but since construction was put on hold in 2008, the islands remain mostly undeveloped.

Many businesses were affected by the global financial crisis in 2008, and property developers in Dubai were no exception. The crisis caused the real estate market to crash, and developers such as Nakheel (the company behind the Palm Islands and The World archipelagos) could no longer afford to continue building.

In 2018, the CEO of Nakheel reported that the Palm Jebel Ali is a "long-term" project that will be revisited at some point in the future. [5] 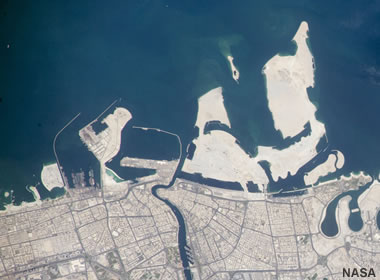 The Deira Islands were in the early stages of being built when construction was put on hold in 2008. The original project, called Palm Deira, was to be another set of artificial islands shaped like a palm tree. It was planned to be the largest of the three palms, about eight times the size of the Palm Jumeirah.

Although land reclamation and construction of the palm has been put on hold, the southwestern portion of the base structure is being developed to host the world's largest night souk - a marketplace or bazaar where people can shop for food, spices, clothing, textiles, crafts, jewelry, housewares, and almost anything else you can imagine.

There are several other artificial islands near the Deira Islands. In the accompanying image, the Deira Islands are the 4 large islands in the right-hand portion of the photo. Moving to the left, other man-made structures shown include Port Rashid, Maritime City, Pearl Jumeirah, and the beginning stages of La Mer. 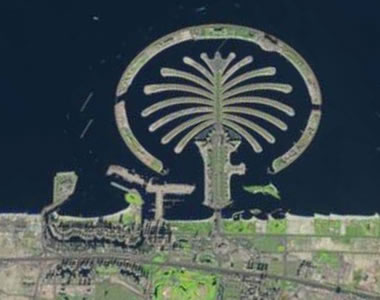 Bluewaters Island is the comma-shaped island to the left of the Palm Jumeirah. This satellite image was produced using 2018-2019 data from USGS LandsatLook.

The most notable feature on Bluewaters Island is Ain Dubai, or the "Dubai Eye." At 250 meters high, it is the world's tallest and largest Ferris wheel. It has 48 spacious observation pods from which visitors can enjoy the view of Dubai's skyline and shoreline. Bluewaters Island is open to the public, and Ain Dubai had its grand opening in October of 2021. 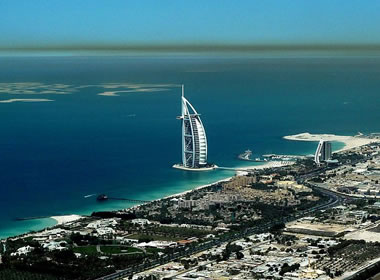 Burj Al Arab Jumeirah: This huge 56-story hotel was designed to look like a ship setting sail into the gulf. The World islands can be seen in the background. Creative Commons image by giggel. Click to enlarge.

Completed in 1999, the Burj Al Arab is a luxurious 5-star hotel which was built on its own artificial island. The interior is stunning. The atrium, which is the tallest in the world, features a large fountain that shoots water more than 42 meters into the air. Over 30 types of marble were used in the hotel, with some imported from Italy and Brazil. But the thing that grabs most people's attention is the amount of gold which is gilded to walls, columns, staircases, fixtures, and more; there is even a gold-plated elevator. In total, 24-karat gold leaf covers about 1,790 square meters of the interior! [6] This amount of gold would weigh approximately 180.4 troy ounces - a value of $52,361 in 1999. [7] This is certainly a lot of money; however, the cost of the labor to carefully install all of the gold leaf was probably much more expensive than the gold itself.

The hotel is almost as tall as the Empire State Building, and 250 subsurface columns were installed to support the massive structure. Each column is 1.5 meters in diameter and runs 45 meters below the surface. These columns (also called foundation piles) are made of concrete reinforced with steel, and they rely on friction from the sand to keep them in place. [8]

Video: The Palm Island, Dubai UAE - Megastructure Development: This in-depth video from 2013 contains a wealth of information about the construction of the Palm Jumeirah. Total run time is about 50 minutes.

The construction of these artificial islands is an enormous project. Sand is dredged from the gulf and redeposited to form the islands. The Palm Jumeirah was created without the use of concrete or steel - just millions of cubic meters of dredged sand and locally quarried rock.

Challenges to the construction include erosion and liquefaction. Additionally, the currents in the gulf now flow around the structures and are eroding the Dubai coastline in places that were previously not affected.