What Are Oil Sands? 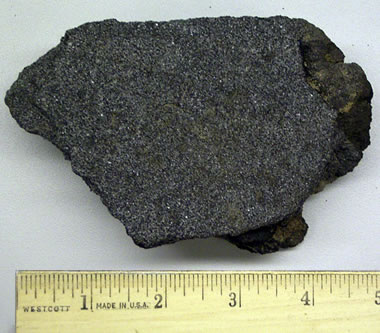 What are Oil Sands?

Oil sands, also known as "tar sands," are sediments or sedimentary rocks composed of sand, clay minerals, water, and bitumen. The oil is in the form of bitumen, a very heavy liquid or sticky black solid with a low melting temperature. Bitumen typically makes up about 5 to 15% of the deposit.

How is the Oil Removed? 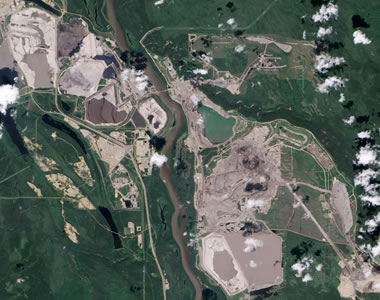 Athabasca oil sands mine: Oil sands mining complex along the Athabasca River in Alberta, Canada. The Athabasca Oil Sands are the largest oil sands deposit in the world. It is the second-largest accumulation of oil in the world after Saudi Arabia. Image by NASA / Earth Observatory. Enlarge image.

Are Oil Sands a Significant Resource?

Most of the world's oil sand resources are located in Alberta, Canada. The Alberta Energy and Utility Board estimates that these contain about 1.6 trillion barrels of oil - about 14% of all of the world's total oil resource. The largest deposit is the Athabasca Oil Sands [1].

At an oil sands mine, the overburden is stripped away and large mining machines load the sand into trucks that haul it to a nearby processing plant. At the processing plant, the oil sand is crushed and then treated with hot water and chemicals to liberate the bitumen. The liberated bitumen is then separated from the water, blended with lighter hydrocarbons to reduce its viscosity, and pumped through a pipeline to a refinery.

Bitumen is removed from deeply buried oil sands by drilling wells - a process known as "in-situ recovery." Several wells are drilled down into the oil sand. Then steam and chemicals are pumped down one well. The hot steam and chemicals soften the bitumen, reduce its viscosity, and flush it to extraction wells where it is pumped to the surface. At the surface the bitumen is cleaned, blended with lighter hydrocarbons and pumped through a pipeline to a refinery.

In the United States, government agencies gave oil companies permits to open demonstration mines and conduct in-situ drilling on government land in the 1930s. These projects resulted in minor amounts of commercial production in California and Utah. However, most were unsuccessful because they were challenged by remote locations, difficult topography, and a lack of water.

The Athabasca Oil Sands of Canada have been the main source of commercial production. The surface-mined deposits there can be successful when oil prices are high but in financial trouble when oil prices fall. They are also challenged by environmental concerns which include: air quality, land use, and water availability.

Oil sands mining and processing have a number of environmental impacts. These include: greenhouse gas emissions, land disturbance, destruction of wildlife habitat, and degradation of local water quality. In the United States the water concerns are especially important because the known oil sands and oil shale deposits are located in arid areas of Utah. Several barrels of water are required for each barrel of oil produced.