Shale Gas Well: The use of horizontal drilling in conjunction with hydraulic fracturing has greatly expanded the ability of producers to profitably produce natural gas from low-permeability geologic formations, particularly shale formations.

The use of horizontal drilling in conjunction with hydraulic fracturing has greatly expanded the ability of producers to profitably produce natural gas from low-permeability geologic formations, particularly shale formations. Application of fracturing techniques to stimulate oil and gas production began to grow rapidly in the 1950s, although experimentation dates back to the 19th century.

Starting in the mid-1970s, a partnership of private operators, the U.S. Department of Energy and the Gas Research Institute endeavored to develop technologies for the commercial production of natural gas from the relatively shallow Devonian (Huron) shale in the Eastern United States. This partnership helped foster technologies that eventually became crucial to producing natural gas from shale rock, including horizontal wells, multi-stage fracturing, and slick-water fracturing. [1]

Practical application of horizontal drilling to oil production began in the early 1980s, by which time the advent of improved downhole drilling motors and the invention of other necessary supporting equipment, materials, and technologies, particularly downhole telemetry equipment, had brought some applications within the realm of commercial viability. [2] 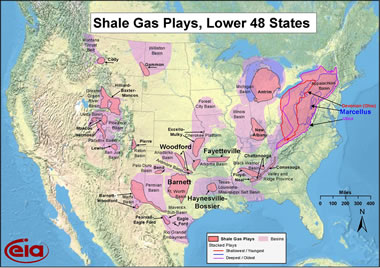 Shale gas plays: Map of the major shale gas plays in the lower 48 states, including the sedimentary basins which contain them. Enlarge map.

The Work of Mitchell Energy and Development

The advent of large-scale shale gas production did not occur until Mitchell Energy and Development Corporation experimented during the 1980s and 1990s to make deep shale gas production a commercial reality in the Barnett Shale in North-Central Texas. As the success of Mitchell Energy and Development became apparent, other companies aggressively entered this play so that by 2005, the Barnett Shale alone was producing almost half a trillion cubic feet per year of natural gas. As natural gas producers gained confidence in the ability to profitably produce natural gas in the Barnett Shale and confirmation of this ability was provided by the results from the Fayetteville Shale in North Arkansas, they began pursuing other shale formations, including the Haynesville, Marcellus, Woodford, Eagle Ford and other shales.

The successful investment of capital and diffusion of shale gas technologies has continued into Canadian shales as well. In response, several other countries have expressed interest in developing their own nascent shale gas resource base, which has lead to questions regarding the broader implications of shale gas for international natural gas markets. The U.S. Energy Information Administration (EIA) has received and responded to numerous requests over the past three years for information and analysis regarding domestic and international shale gas. EIA's previous work on the topic has begun to identify the importance of shale gas on the outlook for natural gas. [4] It appears evident from the significant investments in preliminary leasing activity in many parts of the world that there is significant international potential for shale gas that could play an increasingly important role in global natural gas markets.

To gain a better understanding of the potential of international shale gas resources, EIA commissioned an external consultant, Advanced Resources International, Inc. (ARI), to develop an initial set of shale gas resource assessments. This paper briefly describes key results, the report scope and methodology and discusses the key assumptions that underlie the results. The full consultant report prepared for EIA is in Attachment A. EIA anticipates using this work to inform other analysis and projections, and to provide a starting point for additional work on this and related topics.

In total, the report assessed 48 shale gas basins in 32 countries, containing almost 70 shale gas formations. These assessments cover the most prospective shale gas resources in a select group of countries that demonstrate some level of relatively near-term promise and for basins that have a sufficient amount of geologic data for resource analysis. The map at the top of this page shows the location of these basins and the regions analyzed. The map legend indicates four different colors on the world map that correspond to the geographic scope of this initial assessment:

Red colored areas represent the location of assessed shale gas basins for which estimates of the 'risked' gas-in-place and technically recoverable resources were provided.

Yellow colored area represents the location of shale gas basins that were reviewed, but for which estimates were not provided, mainly due to the lack of data necessary to conduct the assessment.

White colored countries are those for which at least one shale gas basin was considered for this report.

Gray colored countries are those for which no shale gas basins were considered for this report.

The International Shale Gas Resource Base

The estimates of technically recoverable shale gas resources for the 32 countries outside of the United States represents a moderately conservative 'risked' resource for the basins reviewed. These estimates are uncertain given the relatively sparse data that currently exist and the approach the consultant has employed would likely result in a higher estimate once better information is available. The methodology is outlined below and described in more detail within the attached report, and is not directly comparable to more detailed resource assessments that result in a probabilistic range of the technically recoverable resource. At the current time, there are efforts underway to develop more detailed shale gas resource assessments by the countries themselves, with many of these assessments being assisted by a number of U.S. federal agencies under the auspices of the Global Shale Gas Initiative (GSGI) which was launched in April 2010. [8]

Delving deeper into the results at a country level, there are two country groupings that emerge where shale gas development may appear most attractive. The first group consists of countries that are currently highly dependent upon natural gas imports, have at least some gas production infrastructure, and their estimated shale gas resources are substantial relative to their current gas consumption. For these countries, shale gas development could significantly alter their future gas balance, which may motivate development. Examples of countries in this group include France, Poland, Turkey, Ukraine, South Africa, Morocco, and Chile. In addition, South Africa's shale gas resource endowment is interesting as it may be attractive for use of that natural gas as a feedstock to their existing gas-to-liquids (GTL) and coal-to-liquids (CTL) plants.

Countries with a Natural Gas Infrastructure

The second group consists of those countries where the shale gas resource estimate is large (e.g., above 200 trillion cubic feet) and there already exists a significant natural gas production infrastructure for internal use or for export. In addition to the United States, notable examples of this group include Canada, Mexico, China, Australia, Libya, Algeria, Argentina, and Brazil. Existing infrastructure would aide in the timely conversion of the resource into production, but could also lead to competition with other natural gas supply sources. For an individual country the situation could be more complex.