An Extensive Rift System on the Moon? 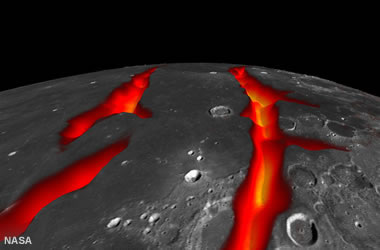 Figure 1: An artist's concept of what the rifts that form a border around Oceanus Procellarum might have looked like while they were flooded with lava. Image credit: NASA / Colorado School of Mines / MIT / JPL / GSFC.

New gravity maps prepared using data from NASA's Gravity Recovery and Interior Laboratory (GRAIL) spacecraft reveal that Oceanus Procellarum, the largest lunar mare, was not formed by a massive asteroid impact. Instead, it is an area that was flooded by lava from an extensive rift system (Figure 1). This discovery appears to rewrite the geologic history for the near side of the moon. 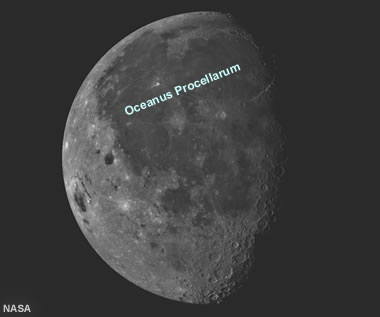 Figure 2: Image of the near side of the moon from the Galileo Spacecraft showing the dark Oceanus Procellarum spanning across the northwestern quadrant. Image credit: NASA/JPL.

An Impact Structure or a Rift-Bounded Basin?

Oceanus Procellarum is a large lunar mare with an irregular outline that spans the northwest quadrant of the moon’s near side. It is one of the largest features on the moon, with a relatively flat surface and a width of approximately 1,800 miles (Figure 2).

In the mid-1970s, many lunar scientists favored the theory that Oceanus Procellarum was produced by an enormous asteroid impact. The impact would have occurred early in the moon's history because lava flows within Oceanus Procellarum are over 3 billion years old. [1]

Such a large asteroid would have penetrated the moon's crust and produced a round crater that would have been quickly flooded with lava from the moon's interior. During the 3 billion years after the impact, the round shape of the crater was thought to have been obscured by later impacts, ejecta, lava flows, and other activity. [2]

Recent gravity mapping using data from NASA's GRAIL spacecraft suggests a new origin for the moon's largest mare. The edges of Oceanus Procellarum appear to be bounded by an extensive rift system. Over 3 billion years ago, these rifts produced an outpouring of lava that flooded the area of the current Oceanus Procellarum and produced the relatively smooth surface that it has today (Figure 3). [3] 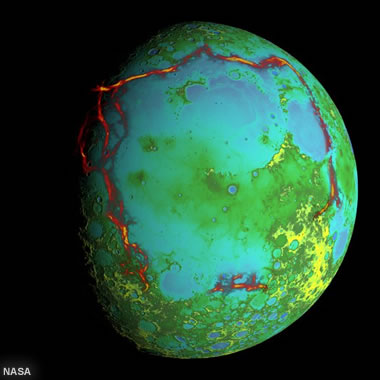 Figure 3: The red in this image represents the pattern of rifting around Oceanus Procellarum inferred by gravity anomalies from the Gravity Recovery and Interior Laboratory (GRAIL) mission. This rectangular outline is thought to be the remnant of a rift system that delivered magma to the surface of the moon's near side, flooding low-lying areas with lava. The rectangular outline differs from the circular outline expected for an asteroid impact structure. The pattern resembles fractures that develop in materials in response to thermal stress. [2]   Image credit: Ernie Wright, NASA Scientific Visualization Studio. Enlarge map.

How the GRAIL Satellites Work

NASA's GRAIL mission consisted of a pair of satellites that orbited the moon at an altitude of about 34 miles. They collected gravity measurements capable of revealing density differences in the lunar subsurface as well as the thickness of the lunar crust.

The satellites flew in close formation. As they passed over areas of the moon with greater and lesser gravity, the distance between the satellites was modified by the strength of the moon's gravitational attraction. These distance changes were then used to produce gravity and crustal thickness maps of the moon (Figure 4). 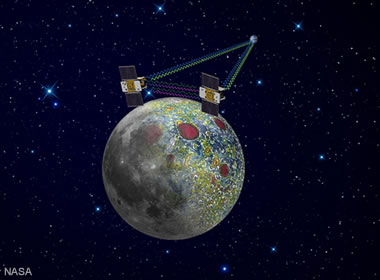 GRAIL satellites: Artist's rendition of the twin GRAIL satellites orbiting the moon, collecting gravity data and transmitting it back to Earth. Image by NASA/JPL-Caltech. 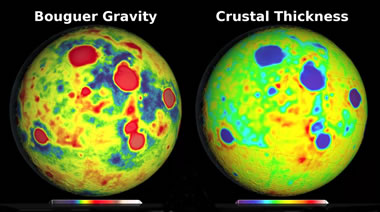 Figure 4: Bouguer gravity and crustal thickness maps of the near side of the moon. The gravity map reveals the locations of impact craters and the inferred rift systems. The crustal thickness map reveals a very thin crust beneath obvious impact structures, but a crust of irregular thickness beneath Oceanus Procellarum. [3] Image credit: NASA Scientific Visualization Studio. 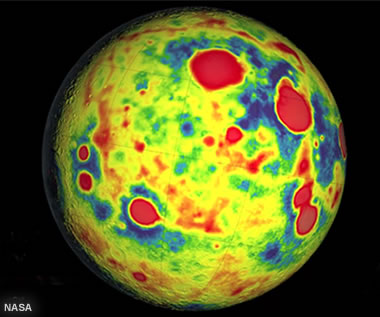 Figure 5: Bouguer gravity map of the near side of the moon. The gravity features of the inferred rift system can be seen as a red rectangle roughly outlining the Oceanus Procellarum. [3] Image credit: NASA Scientific Visualization Studio.

Here is what researchers did and did not find in the GRAIL data:

1) They found gravity features that suggest a buried rift system that forms a rectangular outline around the Oceanus Procellarum (the location of this proposed rift system is shown in red in Figure 3). [4] The rectangular outline of the rift system closely matches the current shape of Oceanus Procellarum and is unlike what would be expected in response to an asteroid impact. The gravity features thought to be rifts can also be seen in red on the gravity map (Figure 5).

2) They found distinct circular gravity features under all the moon's obvious large impact craters (These appear as the circular red features in Figure 4).

3) They did not find a similar circular gravity feature beneath Oceanus Procellarum. Instead, gravity values suggested a crust of variable thickness in that area (Figure 4) [5].

Oceanus Procellarum Was Not Formed by Impact

The gravity data from the GRAIL mission appears to kill the impact formation theory for Oceanus Procellarum. Instead, it supports a formation created by flood basalts from a massive rift system.

Understanding What You Can't Observe Directly

This new idea for the formation of Oceanus Procellarum is a theory based upon remotely collected information. It might be correct or cast aside as new ideas or new information become available. Even if a team of humans visited the moon and collected drilling or seismic data across Oceanus Procellarum, their ability to improve on this theory might not be possible. The answer is difficult to "know" because the available data will always be fragmentary and subject to interpretation.