"Shooting stars", "falling stars" or meteors, call them what you like. These pinpoints of light that streak across the night sky are tiny bits of rock from space. They enter our atmosphere at speeds up to 71 km/s (~158,000 mph). They glow because friction with air molecules heats them to incandescence. Most are smaller than a grain of rice. They burn up in a second or two at altitudes of around 80 km, high in the ionosphere. An especially bright meteor is called a fireball or bolide. 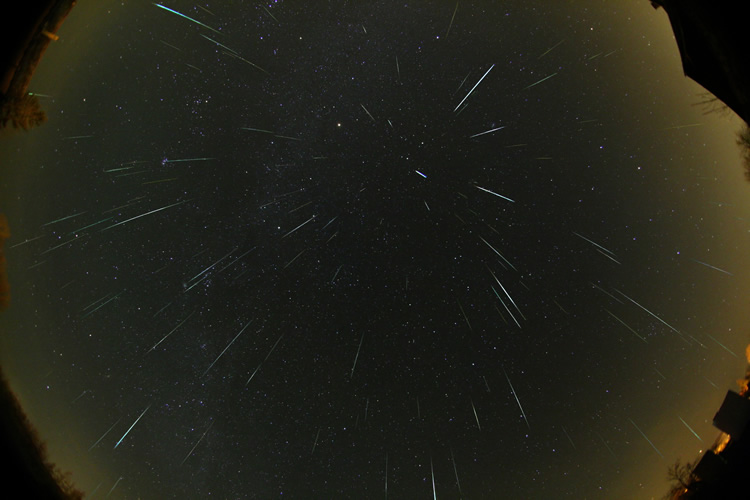 Figure 1: A composite image of meteors from the Geminid meteor shower of 2007 produced by astronomer Erno Berkó. Over four nights, he captured 123 meteors in 113 photographs, then composited them into this single spectacular image. This image clearly shows that the meteors are streaming from a point (know as a "radiant") near the constellation Gemini. Image copyright by Erno Berkó. 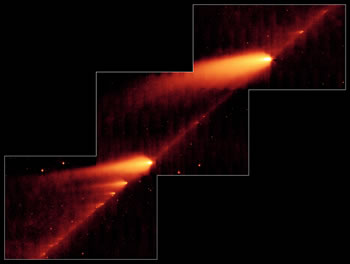 Figure 2: This is a composite infrared image of fragments from Comet 73P/Schwassman-Wachmann 3 captured by the Spitzer Space Telescope. The diagonal line in this image is a dust trail that marks the path of the comet through space. Fragments of the comet appear as bright spots within the dust trail. The bright streaks extending to the left of the comet's fragments are "tails" produced by the solar wind (the sun is to the right of this image).

There are two kinds of meteors – sporadic meteors and shower meteors. Sporadics originate from random bits of solar system dust that orbit the Sun. Their chance encounters with Earth are unpredictable. While they do slightly cluster in various parts of the sky, their occurrence is sporadic – hence the name.  Sporadics are the ones most people see while gazing into the night sky. Naked-eye rates for sporadic meteors seldom exceed five per hour. As far as we know, all meteors that reach the ground - meteorites - come from sporadics.

Shower meteors come from the dust released by comets as they travel through our solar system. The dust spreads out along the comet's orbit and forms an elliptical trail of debris that passes around the sun and crosses the orbits of the planets. Meteor showers occur when the Earth passes through this trail of debris during its yearly orbit around the sun. The following year, Earth passes through that same debris trail again on about the same date. This is why meteor showers are predictable annual events. (See Figures 2 and 3.)

Some meteor showers last only a few hours, others last for several days. The duration depends on how wide the dust trail is; some are narrow, others are wider. Sunlight and particles from the solar wind, a stream of hot, fast ions that is continuously blowing outward from the sun, can push the dust away from the comet's orbit. The smaller the particle, the more it can be moved. As a result, the dust trail can broaden and when it does, it takes the Earth longer to pass through it. (See Figure 2.)

Only rarely is a meteor large enough to survive its fiery passage through the atmosphere and reach the ground. These are called meteorites. No shower meteor is known to have ever reached the ground, which means that comet dust is in the form of very small particles.

Figure 3: A simplified diagram of the solar system showing the concentric orbits of the planets and the elliptical orbit of Halley's comet. Note how the orbit of the comet crosses Earth's orbit.

The "Radiant" of a Meteor Shower

All of the meteors in a meteor shower come from the same direction in space. From the ground, they appear to radiate from single location in the sky, called the radiant. It's like driving your car through a tunnel: some parts of the tunnel pass on your left, or right, over head or beneath the car. In this case the "radiant" would be "straight ahead." Meteor showers are named for the constellation from which they appear to radiate. For example, the "Geminids" appear to originate in the constellation Gemini. (See Figure 1.)

How Many Showers, How Many Meteors?

Meteors produce hot trails of ionized gas behind them. Some of these trails may be visible in the night sky for several minutes after the meteor passes. This gas reflects radar waves and as a result the meteors can also be detected during the day. Recently Dr. Peter Brown and his collaborators at the University of Western Ontario used ground based radars to identify 13 new meteor showers.

How Do Comets Produce Meteor Showers?


Comets are small bodies composed primarily of ice with a little bit of sand or gravel. A typical comet's nucleus is a few miles across. It spends most of its time in a lazy, elliptical orbit in the outer solar system where its nucleus is cold and largely inactive. For example, Halley's comet has a period of 76 years and at its furthest point from the sun is beyond the orbit of Neptune. Here the surface temperature of the comet is about 47 degrees above absolute zero (-375 F).

But during the comet's passage near the Sun, its surface heats up, some of the ice evaporates and dust is released. Each comet has two tails, one composed of dust, the other of gas. Both tails stretch away from the nucleus and point more or less away from the Sun. This is because very hot particles coming from the Sun (solar wind) push the tails outward, regardless of the direction the nucleus is moving.

The dust streams may look uniform but they usually consist of several individual streams, like strands of a rope. Each strand was produced by a different passage of the comet through the inner solar system. The elliptical stream of particles also shifts very slightly from year to year owing to Jupiter's gravitational field. As a result, the number of meteors can vary from one annual shower to the next as the Earth passes through different parts of the dust stream. By about 2099 the orbit of comet Tempel-Tuttle (source of the Leonid meteors) will no longer intersect the Earth's orbit. The result? No more Leonid meteor shower.

Comets are the origin of most meteor showers but a few come from asteroids. These may well be very old comets. After enough passages through the warm, inner solar system, the ice has been completely evaporated, leaving a loose assemblage of dust particles held together by their own feeble gravity. These so-called "rubble pile" asteroids may be the remains of former comets.

Nowadays, some meteors are actually bits of man-made space debris. These tend to be things like paint chips and spent rocket hardware. The meteors they produce can sometimes be identified as man-made because they travel much more slowly across the sky than natural meteors. 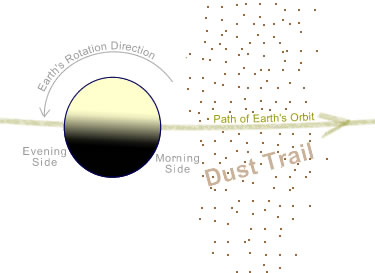 Figure 5: Simplified diagram of Earth approaching a comet's dust trail. In this diagram you are looking down onto the Earth's North Pole. Note how the morning side of Earth will plow into the dust but the evening side will be somewhat shielded. This is why there are often more visible meteors after midnight - you are then on the side of the Earth that is plowing into the dust.

How to Observe a Meteor Shower

First you need to find out when the meteor shower is (See the table above). Next you want to find a place with a clear view of the entire sky. Dark areas well away from any city lights are best. Avoid places where vehicle headlights will momentarily dazzle you. The best approach is to recline in a lawn chair or on the ground with a pillow so you are comfortably looking up. Knowledge of the constellation where the radiant lies may be useful but not necessary: meteors can appear anywhere in the sky. Then relax and gaze into the heavens. Binoculars are not necessary to see the meteors but may be helpful in seeing the vapor trail after an especially bright meteor. Other useful equipment is insect repellant in summer. A flashlight can be useful but be sure it has a red filter to avoid losing your dark adaptation when using it.

Moonless nights are best because the moon brightens the sky. With a full moon, the eye cannot become completely dark-adapted. Full adaptation takes about 20 minutes.

Maybe you are reading this article because you are getting ready to watch a meteor shower. I hope that you have fun and enjoy the experience. If you would like to see a meteor shower get your calendar out and mark it for one of the showers listed in the table above. Now that you know how meteor showers work you will not want to miss it.

David K. Lynch, PhD, is an astronomer and planetary scientist living in Topanga, CA. When not hanging around the San Andreas fault or using the large telescopes on Mauna Kea, he plays fiddle, collects rattlesnakes, gives public lectures on rainbows and writes books (Color and Light in Nature, Cambridge University Press) and essays. Dr. Lynch's latest book is the Field Guide to the San Andreas Fault. The book contains twelve one-day driving trips along different parts of the fault, and includes mile-by-mile road logs and GPS coordinates for hundreds of fault features. As it happens, Dave's house was destroyed in 1994 by the magnitude 6.7 Northridge earthquake.