A photo sequence of a rockfall and debris avalanche from August 6th, 2006 by Herb Dunn

On August 6th, 2006 Herb Dunn was sitting on a rock along the Merced River in Yosemite National Park. He was taking photos and enjoying a great summer day. He had just taken a photo of Elephant Rock.

Suddenly he heard a loud POP. Startled, he quickly looked high up the canyon wall to where the sound originated and saw a huge rock about 100 feet long and about 50 feet wide, falling from the steep canyon face. The rock hit the ground, and exploded, sending a shower of boulders into the air (one rock the size of a microwave oven splashed into the river in front of him as he photographed the event).

Herb prepared to run but the terrain around him was too steep and rocky. Escape was impossible. So he did what any respectable photographer would do and shot photos of the entire event. Fortunately the avalanche of rock and debris stopped short of his position. He shares his images below for your education and interest. 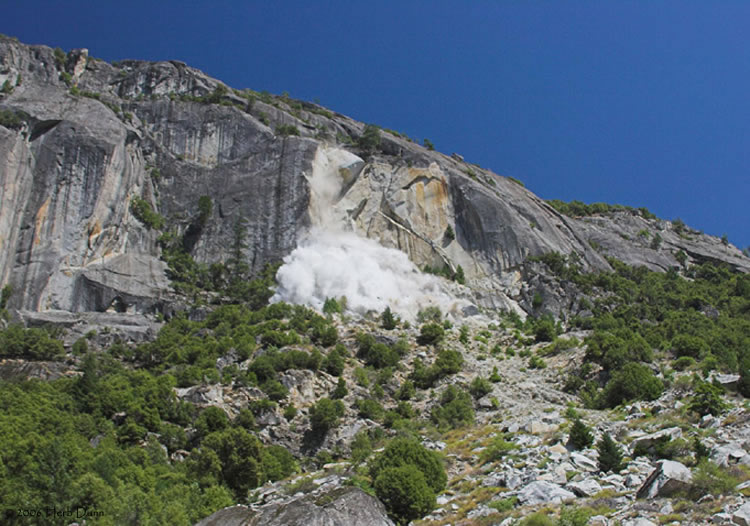 The impact of the rock hitting the ground produces an explosion of dust and debris. 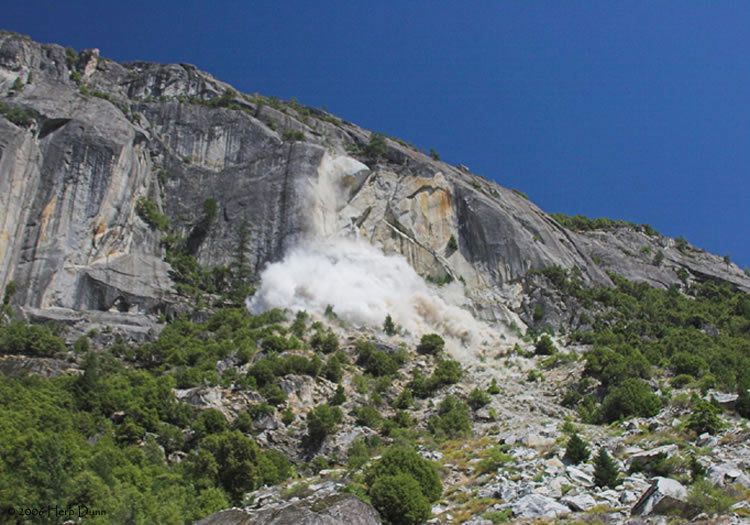 A debris avalanche is triggered and starts moving down the steep slope. 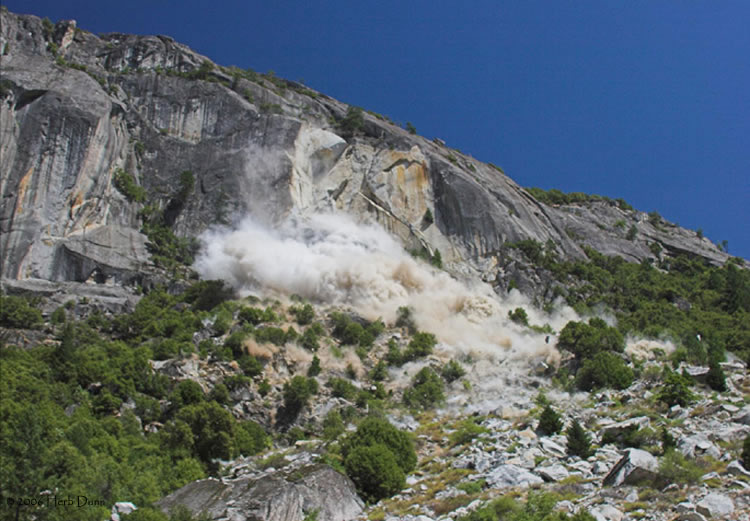 A chain reaction begins. More material is launched into motion and the debris avalanche increases in volume. 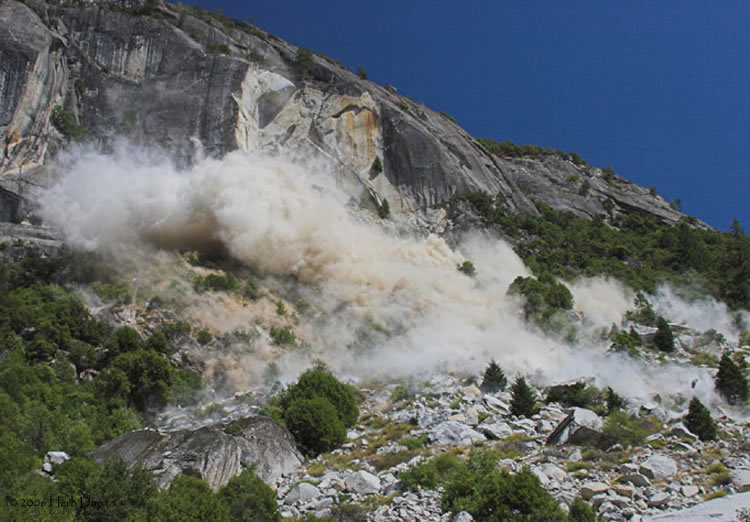 Large rocks lead the way, bouncing down the slope and kicking up dust trails. A large dust cloud overruns the landscape. 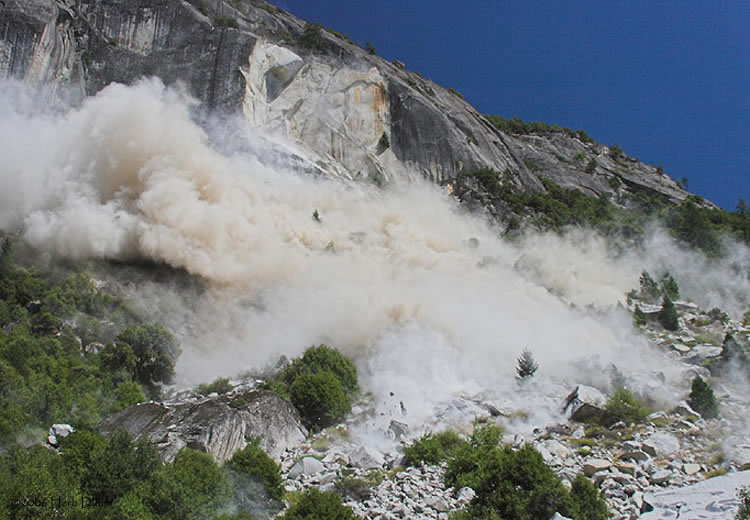 The debris avalanche continues down the slope, knocking down trees. The dust cloud spreads out, covering an increasing area. 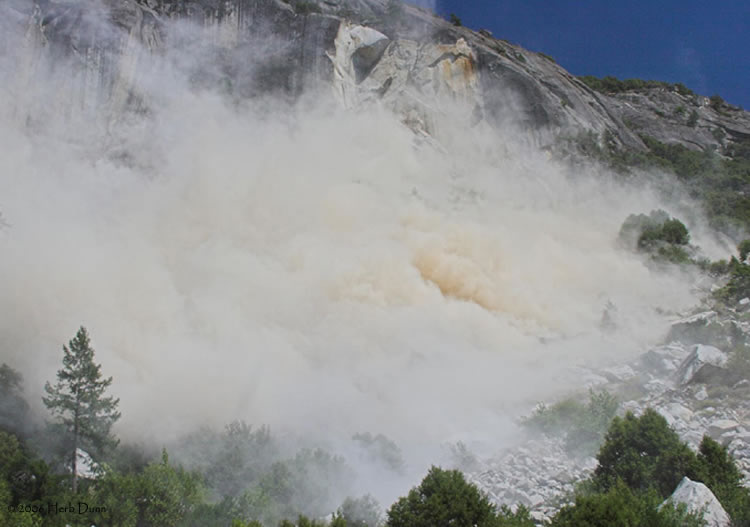 Within seconds the entire slope is engulfed by the debris avalanche and dust. 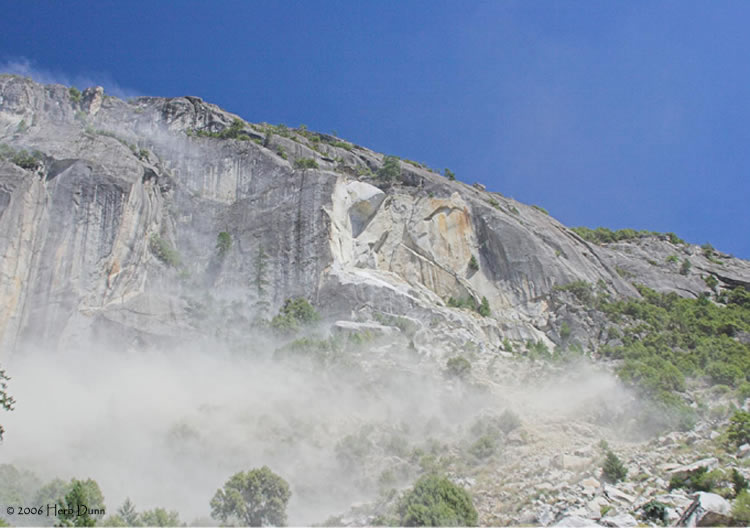 Moments later, the dust is still clearing. The size of the fallen rock and damage to the landscape can be better appreciated. Fortunately no one was in the area engulfed by the debris avalanche.

Return to Top! - View it Again.

Herb Dunn is an avid photographer who lives in Bakersfield, California. He loves taking photos of Yosemite National Park and is known as "Yosemite Junkie" on photography forums. He is President of the Kern Photography Association. His photo gallery is: HerbDunn.com.