Home » Landslides » What is a Debris Flow?

What is a Debris Flow?

Debris flow near Hyderabad, India: The first fifty seconds of this video shows the water being pushed at the front of the flow. At about 0:55, spectators on the opposite side of the stream can see the rocks coming and run for their lives!

A debris flow is a moving mass of loose mud, sand, soil, rock, water and air that travels down a slope under the influence of gravity. To be considered a debris flow, the moving material must be loose and capable of "flow," and at least 50% of the material must be sand-size particles or larger. 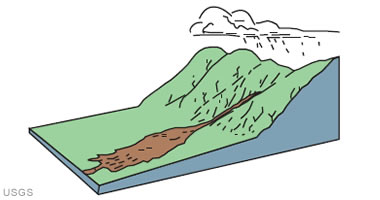 USGS debris flow illustration: Debris-flow source areas are often associated with steep gullies, and debris-flow deposits are usually indicated by the presence of debris fans at the mouths of gullies. Image and caption by the United States Geological Survey.

The speed and volume of debris flows make them very dangerous. Every year, worldwide, many people are killed by debris flows. This hazard can be reduced by identifying areas that can potentially produce debris flows, educating people who live in those areas and govern them, limiting development in debris flow hazard areas, and developing a debris flow mitigation plan.

The source area of a debris flow must have: 1) a very steep slope, 2) an abundant supply of loose debris, 3) a source of abundant moisture, and 4) sparse vegetation. Identifying areas where debris flows have happened in the past or where these conditions are present is the first step towards developing a debris flow mitigation plan. The map below shows areas inundated by historic debris flows at Glacier Peak, Washington.

Glacier Peak debris flows: Areas inundated by debris flows from Glacier Peak volcanic eruptions. Over the past 15,000 years, hundreds of lahars and debris flows have swept down valleys around the mountain, filling them with thick deposits. Image by the United States Geological Survey. Enlarge map. 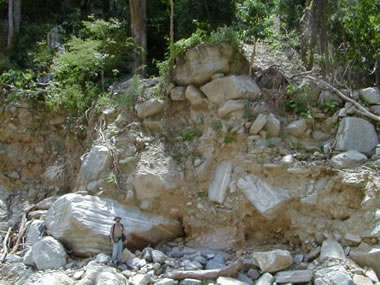 Is It a Debris Flow, a Mud Flow, or a Landslide?

Debris flows differ from slides because they are made up of "loose" particles that move independently within the flow. A slide is a coherent block of material that "slides" over a failure surface. 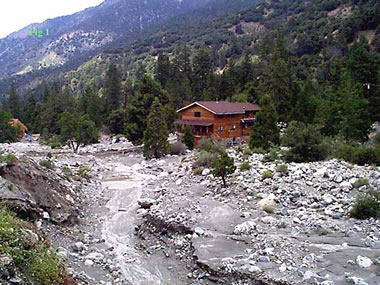 Debris flows can be triggered by many different situations. Here are a few examples:

Addition of Moisture: A sudden flow of water from heavy rain, or rapid snowmelt, can be channeled over a steep valley filled with debris that is loose enough to be mobilized. The water soaks down into the debris, lubricates the material, adds weight, and triggers a flow.

Removal of Support: Streams often erode materials along their banks. This erosion can cut into thick deposits of saturated materials stacked high up the valley walls. This erosion removes support from the base of the slope and can trigger a sudden flow of debris.

Failure of Ancient Landslide Deposits: Some debris flows originate from older landslides. These older landslides can be unstable masses perched up on a steep slope. A flow of water over the top of the old landslide can lubricate the slide material, or erosion at the base can remove support. Either of these can trigger a debris flow.

Wildfires or Timbering: Some debris flows occur after wildfires have burned the vegetation from a steep slope or after logging operations have removed vegetation. Before the fire or logging, the vegetation's roots anchored the soil on the slope and removed water from the soil. The loss of support and accumulation of moisture can result in a catastrophic failure. Rainfall that was previously absorbed by vegetation now runs off immediately. A moderate amount of rain on a burn scar can trigger a large debris flow.

Volcanic Eruptions: A volcanic eruption can flash melt large amounts of snow and ice on the flanks of a volcano. This sudden rush of water can pick up ash and pyroclastic debris as it flows down the steep volcano and carry them rapidly downstream for great distances. In the 1877 eruption of Cotopaxi Volcano in Ecuador, debris flows traveled over 300 kilometers down a valley at an average speed of about 27 kilometers per hour. Debris flows are one of the deadly "surprise attacks" of volcanoes. 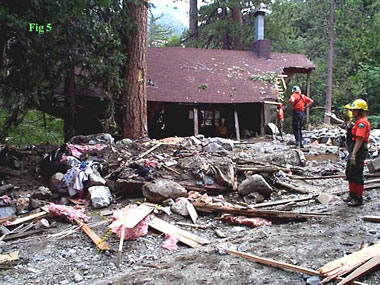 Debris flows can be very dangerous. They can move at high speeds, travel long distances, and fill stream valleys up to 100 meters deep with debris. Early warning systems are being developed for use in areas where debris flow risk is especially high. One method uses sensitive seismographs to detect debris flows that have already started moving. Another uses radar precipitation estimates and established rainfall intensity-duration threshold values to determine when meteorological conditions are right for flows to occur. 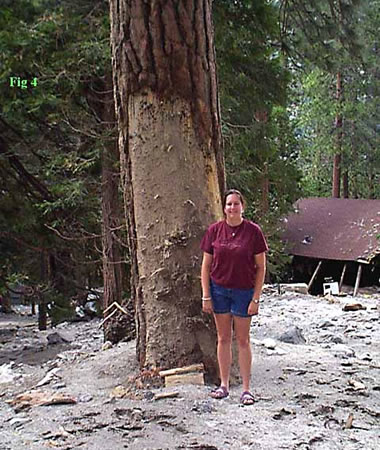 Forest Falls debris flow: A yellow pine tree battered by a recent debris flow. The person is standing on debris flow deposits, and the height of damage to the tree is over 8 feet (three meters) higher than the deposit surface. United States Geological Survey photo.

How to Survive a Debris Flow

"Because debris flows are confined to areas downslope and downvalley from their points of origin, people can avoid them by seeking high ground. Debris-flow hazard decreases gradually downvalley from possible source volcanoes but more abruptly with increasing altitude above valley floors. People seeking to escape flows should climb valley sides rather than try to outrun debris flows in valley bottoms. During eruptive activity or precursors to eruptions, local government officials may ask for prompt evacuation of areas likely to be affected."

A high-intensity rain storm on July 11, 1999 produced numerous debris flows on the steep south side of Mill Creek Canyon in the Forest Falls area of San Bernardino County, California. The steep slopes in this area regularly produce debris flows and display numerous chutes on the canyon walls.

For more information on this flow see the USGS report.