Loihi Seamount: The Next Volcanic Island in the Hawaiian Chain

A submarine volcano is rising off the southeast coast of Hawaii

A New Island in the Hawaiian Chain?

If the hot-spot theory is correct, the next volcano in the Hawaiian archipelago should form east or south of the Island of Hawai'i. Abundant evidence indicates that such a new volcano exists at Lö'ihi, a seamount (or submarine peak) located about 20 miles off the south coast. Lö'ihi rises 10,100 feet above the ocean floor to within 3,100 feet of the water surface.

Recent detailed mapping shows Lö'ihi to be similar in form to Kïlauea and Mauna Loa. Its relatively flat summit apparently contains a caldera about 3 miles across; two distinct ridges radiating from the summit are probably rift zones. 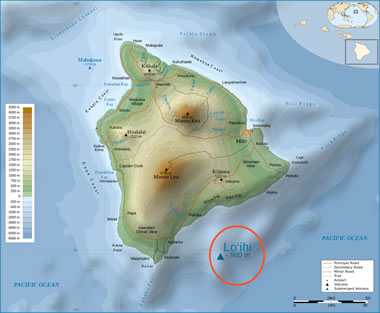 Loihi Seamount: An active submarine volcano off the southern coast of the Big Island of Hawai'i. Creative Commons image by Kmusser. Click to enlarge.

Photographs taken by deep-sea cameras show that Lö'ihi's summit area has fresh-appearing, coherent pillow-lava flows and talus blocks. Pillow-lava fragments dredged from Lö'ihi have fresh glassy crusts, indicative of their recent formation. The exact ages of the sampled Lö'ihi flows are not yet known, but certainly some cannot be more than a few hundred years old.

In fact, since 1959 the HVO seismic network has recorded large earthquake swarms at Lö'ihi during 1971-1972, 1975, 1984-1985, 1990-1991, and 1996, suggesting major submarine eruptions or magma intrusions into the upper part of Lö'ihi. The July-August 1996 swarm was by far the most energetic seismic activity at Lö'ihi recorded to date, involving more than 4,200 earthquakes. Ninety-five of these earthquakes had magnitudes of 4.0 or larger, and three of these were felt onshore by residents of Hawai'i's Ka'ü District.

The intense 1996 earthquake activity at Lö'ihi launched two "rapid-response" expeditions in August-September by University of Hawai'i scientists to conduct onsite observations of the activity. This included surface-ship bathymetric surveys and a series of manned-submersible dives to make closeup observations and collect lava samples. These rapid-response and followup studies indicated that part of Lö'ihi's summit had collapsed to form a new pit crater (called Pele's Pit), about 1,800 feet across and 900 feet deep.

Hawaii Offshore Earthquakes: A map showing the location of seismic activity off the coast of Hawaii. The summit crater of Lö'ihi Volcano is near the center of the activity.

Within this new crater, several new hydrothermal vents were observed, issuing the hottest waters ever measured at Lö'ihi (about 390°F). Also, the observations showed the deposition of large quantities of glassy sand and gravel. While not conclusive, dating of two samples of young lava flows by an experimental isotopic technique has been interpreted by some scientists to suggest at least one, possibly two eruptions slightly preceded the 1996 earthquake swarm. Thus, from the periodic earthquake swarms and associated changes in structure, Lö'ihi appears to be a dynamic, actively growing, but still submarine, volcano.

Seismic data also indicate that the deepest earthquakes beneath Lö'ihi merge with the deep earthquakes beneath neighboring Kïlauea. This downward convergence implies that Lö'ihi, Kïlauea, and Mauna Loa all tap the same deep magma supply. The triangular zone defined by the summits of these three active volcanoes perhaps can be taken to lie over the postulated Hawaiian hot spot.

The Next Island in the Hawaiian Chain?

Studies of Lö'ihi provide a unique opportunity to decipher the youthful submarine stage in the formation and evolution of Hawaiian volcanoes. Scientists wonder when the still-growing Lö'ihi will emerge above the surface of the Pacific to become Hawai'i's newest volcano island. It will almost certainly take several tens of thousands of years, if the growth rate for Lö'ihi is comparable to that of other Hawaiian volcanoes (about 0.1 foot per year averaged over geologic time). It is also possible that Lö'ihi will never emerge above sea level and that the next link in the island chain has not yet begun to form.