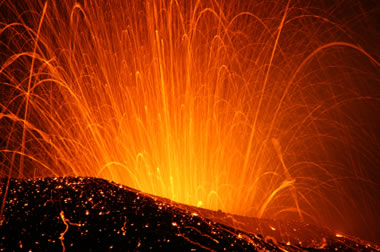 Mount Etna night eruption: A night photo of Mount Etna producing an eruption of glowing ejecta in 2008. These spectacular eruptions can be seen from many parts of Sicily. Image copyright iStockphoto / Frizi.

Mount Etna is the highest and most active volcano in Europe. Towering above the city of Catania on the island of Sicily, it has been growing for about 500,000 years and is in the midst of a series of eruptions that began in 2013.

Etna has displayed a variety of eruption styles, including violent explosions and voluminous lava flows. More than 25% of Sicily's population lives on Etna's slopes, and it is the main source of income for the island, both from agriculture (due to the rich volcanic soil) and tourism.

Where is Mount Etna? Map showing the location of Mount Etna on the east coast of Sicily. Map by Geology.com and MapResources. 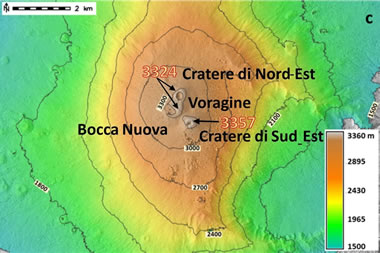 New Elevation Record: A map showing the location of a new record elevation of Mount Etna - on the rim of the southeastern crater. Map by the National Institute for Geophysics and Volcanology. Nearby Volcanoes: Stromboli, Vesuvius

In August 2021, The National Institute for Geophysics and Volcanology in Catania, Italy, reported that a series of about 50 small eruptions in early 2021 added about 100 feet to the elevation of Mount Etna. View announcement.

Accumulations of lava and pyroclastic materials produced by these eruptions made a location on the rim of the southeastern crater the highest point on the volcano. The new elevation of 11,013 feet (3357 meters) is the volcano's highest determined elevation in recorded history. 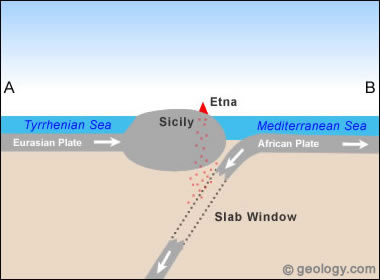 Simplified plate tectonics cross section showing how Mount Etna is located above a subduction zone formed where the Eurasian and African plates collide. In this subduction zone, a window has torn in the subducting slab. 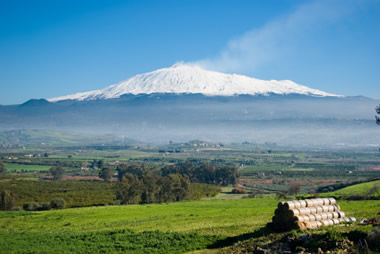 Mount Etna is associated with the subduction of the African plate under the Eurasian plate, which also produced Vesuvius and Campi Flegrei, but is part of a different volcanic arc (the Calabrian rather than Campanian). A number of theories have been proposed to explain Etna's location and eruptive history, including rifting processes, a hot spot, and intersection of structural breaks in the crust. Scientists are still debating which best fits their data, and are using a variety of methods to build a better image of the Earth's crust below the volcano.

VEI:   The Most Explosive Volcanic Eruptions 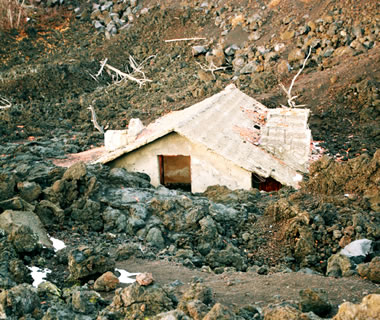 Mount Etna consists of two edifices: an ancient shield volcano at its base, and the younger Mongibello stratovolcano, which was built on top of the shield. The basaltic shield volcano eruptions began about 500,000 years ago, while the stratovolcano began forming about 35,000 years ago from more trachytic lavas. The volcano's slopes currently host several large calderas which formed when the roofs of magma chambers collapsed inward, including the east-facing, horseshoe-shaped Valle de Bove.

Etna's current activity consists of continuous summit degassing, explosive Strombolian eruptions, and frequent basaltic lava flows. Ash clouds from the explosive eruptions are especially hazardous to aircraft, since ash that is pulled into a jet engine can melt, coat moving parts with a layer of glass, and cause the engine to shut down. These dangerous ash clouds are often visible from space.

Etna has also produced pyroclastic flows, ashfalls, and mudflows, but the lava flows are the most immediately hazardous type of activity, especially to the city of Catania.

The lava flows themselves usually do not move fast enough to threaten humans, but they can cover large areas and destroy crops and buildings. In the event of a large flank (fissure) eruption, evacuating the inhabitants of towns and cities near the volcano would be a huge challenge. 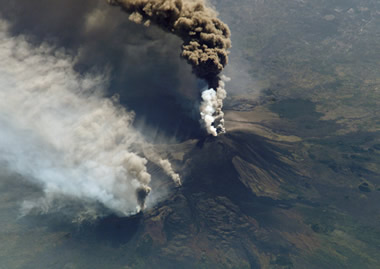 Mount Etna ash plume: An oblique photograph of Mount Etna looking to the southeast taken by astronauts onboard the International Space Station on October 30, 2002. The dark plume rising from the top of the volcano is an ash cloud. The broad white cloud streaming from areas of lower elevation is smoke produced by forest fires ignited as a hot lava flow moved through a pine forest. The ash and smoke caused air traffic to be diverted and forced the closing of roads, schools and businesses. Larger Image. 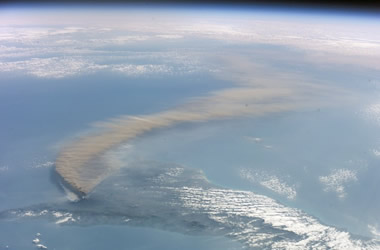 Mount Etna ash plume: An oblique photograph of Mount Etna on the west coast of the island of Sicily. This photo is looking to the southeast with the Mediterranean Sea in the background and was taken by astronauts onboard the International Space Station on October 30, 2002. The scene shows the ash plume from the eruption being carried by wind across the Mediterranean Sea to Libya, over 350 miles away. Larger Image. 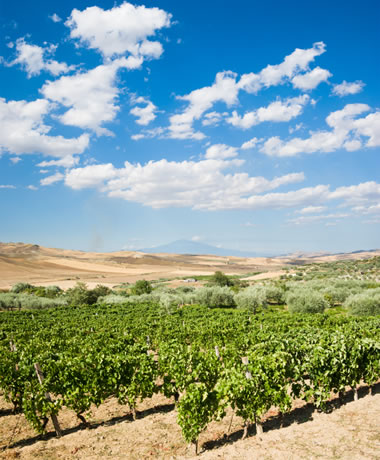 A Sicilian vineyard growing in the shadow of Mount Etna. The inhabitants of Sicily must balance the advantage of rich volcanic soil with the dangers of losing their crops and farms to an eruption from the still-active volcano. Image copyright iStockphoto / Domenico Pellegriti.

Etna's eruptions have been documented since 1500 BC, when phreatomagmatic eruptions drove people living in the eastern part of the island to migrate to its western end. The volcano has experienced more than 200 eruptions since then, although most are moderately small. Etna's most powerful recorded eruption was in 1669, when explosions destroyed part of the summit and lava flows from a fissure on the volcano's flank reached the sea and the town of Catania, more than ten miles away. This eruption was also notable as one of the first attempts to control the path of flowing lava.

The Catanian townspeople dug a channel that drained lava away from their homes, but when the diverted lava threatened the village of Paterno, the inhabitants of that community drove away the Catanians and forced them to abandon their efforts.