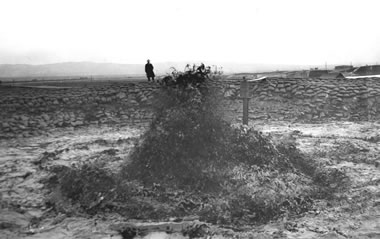 Lakeview Gusher: Photograph of the Lakeview Gusher, an out-of-control oil well that spilled 9 million barrels of oil during 1910-1911 in Kern County, California. The person in the background is standing on a pile of sandbags placed to contain the spill. USGS image by W.C. Mendenhall. Enlarge image.

Most of the world's largest oil spills fit into three different categories: 1) acts of war; 2) out-of-control wells; and 3) tanker accidents. Tanker accidents account for most of the world's oil spills that exceed 1 million barrels. Although large out-of-control well spills have not occurred frequently, they are responsible for some of the largest spills. Summaries of the spills shown on the map above are presented in the paragraphs below. 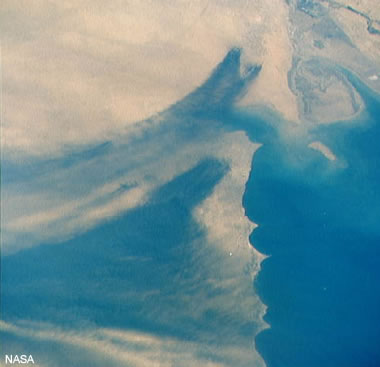 Kuwait Oil Fires: Smoke from the burning oil fields to the north and south of Kuwait City, seen on the south shore of Kuwait Bay, almost totally obscures the view of the tiny but oil rich nation of Kuwait (29.0N, 48.0E). During the brief war between Iraq and the Allied forces, many of the oil wells in Kuwait were destroyed and set afire. For several months, those fires burned out of control, spewing wind-borne smoke and ash for hundreds of miles. NASA photo: STS037-73-047.

During the Gulf War, Iraqi forces invaded Kuwait. As they were being driven out by Coalition forces, they opened pipeline valves at the Sea Island Oil Terminal, spilling the oil onto the ground. They also spilled the cargo of tankers into the Persian Gulf. During their retreat they set many fires at wells and pipeline terminals. It is impossible to determine the total volume of oil spilled, but the total could be about 11,000,000 barrels (1, 2, 3).

The Lakeview Gusher was an out-of-control oil well that spilled an estimated 9,000,000 barrels (4, 5) of oil in Kern County, California. The well delivered oil faster than crews were able to route it into storage tanks. The pressurized well erupted like a geyser, spilling oil onto the ground for over one year until it played out naturally.

The Deepwater Horizon Oil Spill occurred in the Gulf of Mexico. It began on April 20, 2010 when an explosion destroyed the Deepwater Horizon drilling rig, causing a pressurized flow of oil near the wellhead on the Gulf of Mexico floor in over 5,000 feet of water. Numerous attempts to stop the leak in that difficult environment were partially successful. The well was finally capped on July 15, 2010. The amount of oil lost is unknown because accurate estimates cannot be made from ocean floor video observations. An estimate from the government-appointed Flow Rate Technical Group is 4.9 million barrels (6).

Ixtoc was an exploratory well being drilled by Pemex, Mexico's government-owned oil company, in the Bay of Campeche, Gulf of Mexico. It was located about 60 miles northwest of Ciudad del Carmen in water about 160 feet deep. The spill was triggered when the drilling rig lost mud circulation, and pressure reduction on the reservoir triggered a blowout. The oil caught fire and the rig collapsed into the ocean. The estimated amount of oil spilled was 3.3 million barrels (7, 8).

The Atlantic Empress was a Greek oil tanker that collided with another ship off the coast of Trinidad and Tobago on July 19, 1979. About 2,123,800 barrels of oil were spilled (9).

The Mingbulak oil spill occurred on March 2, 1992 at the Mingbulak oil field in the Fergana Valley of Uzbekistan. The spill was caused by a blowout that caught fire and burned for two months. About 2,110,000 barrels of oil were contained behind an emergency dam (10).

The ABT Summer was a tanker that was severely damaged by an explosion on May 28, 1991 off the coast of Angola. It was carrying a cargo of about 1,920,000 barrels of crude oil (11). The tanker sank in the Atlantic.

The Castillio de Bellver was severely damaged by a fire on August 6, 1983 off the coast of South Africa with about 1,870,000 barrels of oil on board (12). The tanker washed aground and broke in two. The stern drifted from shore and sank in the Atlantic.

The Amoco Cadiz was a very large crude carrier that encountered an extreme storm and ran aground on the coast of Brittany, France on March 16, 1978. The ship had about 1,600,000 barrels of oil onboard (13). A rip in the hull from the grounding started the spill. The ship broke up over the next few days, spilling most of the oil.

The Odyssey was an oil tanker that sank off the coast of Nova Scotia, Canada on November 10, 1988. It was caught in a North Atlantic storm and was broken up by an onboard explosion. It was carrying 977,000 barrels of crude oil (15).