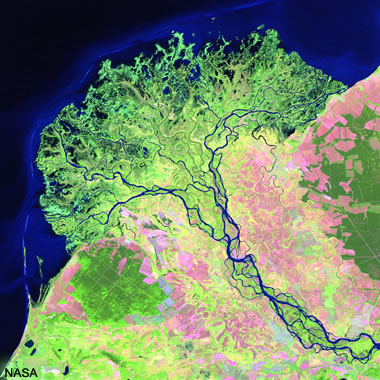 Selenga River Delta satellite image: Landsat 5 image of the Selenga River Delta acquired on August 23, 2010. The delta is located on the southeastern shoreline of Lake Baikal. This image clearly shows the distributaries of the delta, meandering channels on the alluvial plain, and sediment-laden waters on the delta front. Landsat GeoCover image by the United States Geological Survey. Enlarge image. [3]

Where is the Selenga River?

The Selenga River (often called Selenge River) is a major river in Asia that forms at the confluence of the Ider and Delger Rivers in northern Mongolia. It flows northeastwards through Mongolia and Russia and forms a large delta on the southeast shoreline of Lake Baikal, the world's largest and deepest freshwater lake. Tributaries include: Eg River, Dzhida River, Orkhon River, Khanui River, Chikoy River, Khilok River, and Uda River. The Selenga is the primary contributor of water to Lake Baikal, and its tributaries drain approximately 80 percent of the lake's watershed. [1]

The average discharge of the Selenga River into Lake Baikal varies from 100 m3/s in winter to 1,700 m3/s during spring snow melt. [2]

Waters of the Selenga River are used for agricultural irrigation, community water supplies, industry, mining, recreation, tourism, and transportation. Many of these uses degrade the quality of the water, limit downstream availability, and produce ecological impacts. Mongolia and Russia share an international effort to manage the Selenga River to improve water quality and sustain the water resource. [5]

In Mongolia large amounts of water are used to irrigate fields of wheat and other grains. Near the delta in Russia, networks of canals have been built to irrigate agricultural land. These can be viewed by enlarging the satellite image on this page. 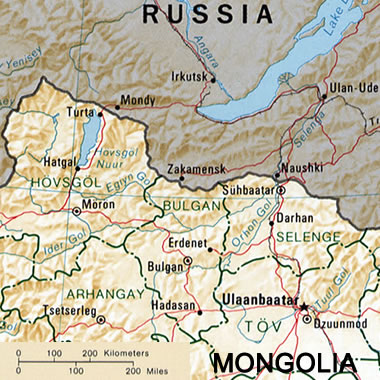 Map showing the Selenga River's course through parts of Mongolia and Russia: The Selenga River delta is clearly visible on the southeast shoreline of Lake Baikal. Map by the Central Intelligence Agency. Enlarge map.

As the Selenga River approaches Lake Baikal, it crosses a broad alluvial plain where the river slows down, begins to deposit sediments, and develops a meandering course. The Landsat image above shows the braided river channel, channel cutoffs, and oxbow lakes. The river has deposited enormous amounts of sediment into Lake Baikal. The result of this deposition is a large lobate delta over 25 miles (40 kilometers) wide.

The delta is dissected by numerous distributary channels with natural levees that separate extensive swamps. [3]

Depositional bars have formed in front of the delta from reworked sediments (these can be clearly seen by enlarging the snowcover satellite image below). The lobate shape of the delta and its numerous distributary "bird feet" show that the delta has not been significantly modified by the actions of lake tides and waves. 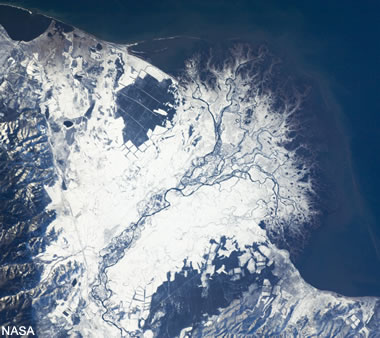 Lake Baikal is a World Heritage Site, and wetlands of the Selenga River delta are designated as a Ramsar site. They provide valuable habitat for more than 170 species of birds, including many migrating species. Like Lake Baikal, the Selenga Delta is home to unique ecosystems, including more than 70 rare or endangered species of plants and animals. [4]

Land use on the Selenga Delta

The Selenga Delta is used extensively by local people for livestock grazing, hay and grain cultivation, commercial fishing, trapping, hunting, and other recreational activities. These activities often encroach on the habitats of endangered plants and animals. [4]

A hydro-electric power plant, the Irkutsk Hydroelectric Power Station, was built on the Angara River, the only river draining Lake Baikal. The dam regulates the flow of the river and causes water-level fluctuations in Lake Baikal. These water-level changes result in a large part of the Selenga Delta being waterlogged and then drained in response to activities at the power station.