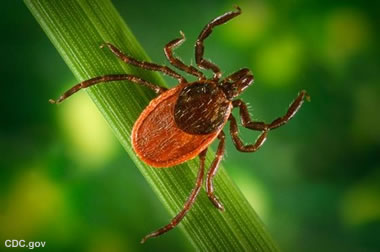 Deer tick: Photograph of a black-legged tick, also known as a deer tick (Ixodes scapularis). Image by the National Institute for Occupational Safety and Health / Center for Disease Control.

Geologists and others who work in the field should have some knowledge about ticks and tickborne diseases. If left untreated, Lyme disease, Rocky Mountain Spotted Fever, and other illnesses caused by tick bites can lead to chronic neurological problems, severe joint pain that can persist for years, and, in some instances, death.

Outdoor workers should know how to recognize ticks, avoid tick bites, and recognize the early signs of Lyme disease and other illnesses caused by tick bites. Early treatment can often produce a rapid and complete recovery. 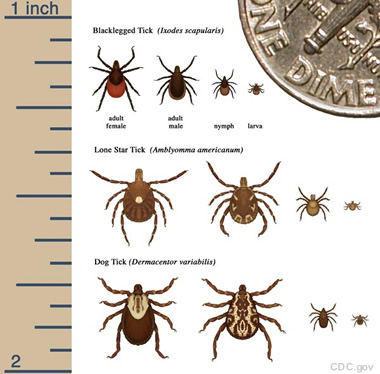 Graphic showing common types of ticks and their appearance at different stages of their life cycle. Image by the National Institute for Occupational Safety and Health / Center for Disease Control.

The bacteria responsible for Lyme disease, Borrelia burgdorferi, normally lives in mice, squirrels and other small animals. It is transmitted from one animal to another through the bites of certain species of ticks. The black-legged tick (or deer tick, Ixodes scapularis) and the western black-legged tick (Ixodes pacificus) both can carry and transmit the disease. (See photographs and illustrations.) 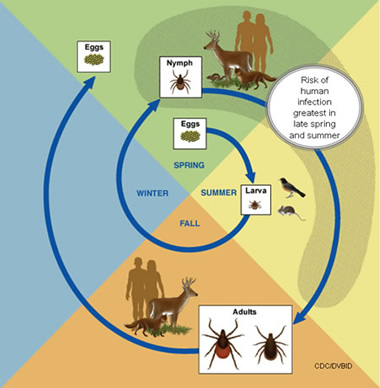 Graphical representation of the two-year life cycle of the blacklegged tick. People are at greatest risk of infection while the tick is in its nymphal stage during the spring and summer of its second year, with additional risk from adult ticks in the fall of its second year. Center for Disease Control.

This short video from the Centers for Disease Control presents the story of John, who contracted Lyme disease from a tick bite, while on a camping trip with his son. John describes his early symptoms and diagnosis. His physician, Dr. Heaton, explains the common concerns that most patients have about Lyme disease. The video concludes with John suggesting some tips for avoiding tick bites and Lyme disease.

Blacklegged ticks live for two years. They lay eggs in the spring, and those eggs hatch as larvae that summer. The larvae feed by biting small animals and consuming their blood. If the animal is infected with Lyme disease bacteria, the tick ingests the bacteria and becomes infected. The larvae progress to the nymph stage by the following spring. (See accompanying illustration.)

In the spring the ticks are very active and searching for another blood meal. When the tick feeds again, it transmits bacteria into its host. The host is usually a rodent; however, this is the stage when humans are usually bitten.

These bites usually occur in the late spring and summer. This is the time of year when humans should take the greatest precaution.

The nymphs progress to adult stage in the fall. Adult ticks usually feed on large animals and sometimes on humans. In the spring, the adults lay their eggs on the ground and their life cycle is complete.

Map showing the incidence of Lyme disease in the United States. Values are the number of confirmed cases per 100,000 population. Map by Geology.com using data from the Center for Disease Control - 2017 data.

The Center for Disease Control offers the following advice for avoiding tick bites: 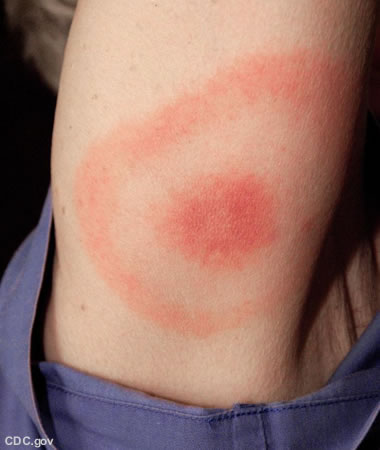 Photograph of the circular rash known as "erythema migrans" that is often present in the early stage of Lyme disease. Note the "bull's-eye" pattern that surrounds the site of the tick bite. Lyme disease patients who are diagnosed early, and receive proper antibiotic treatment, usually recover rapidly and completely. Photograph by James Gathany, Center for Disease Control.

Keep Ticks Off of Your Skin 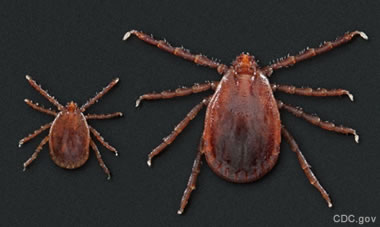 Asian Longhorned Ticks: Top view of a nymph and an adult female Asian longhorned tick. These ticks are native to China, Japan, Korea, and Russia. However, in recent years they have been found on people and animals in the United States as far west as Arkansas. Asian longhorned ticks are able to reproduce without a male, and a single female tick can create a large infestation. If you find one of these ticks, seal it in a bag or a jar and contact your doctor or veterinarian. [6] Photo by the Center for Disease Control.

Check Your Skin and Clothes Daily

Remove a tick from your skin as soon as you notice it. Use fine-tipped tweezers to firmly grasp the tick very close to your skin. With a steady motion, pull the tick's body away from your skin. Then clean your skin with soap and warm water. (For more details see information at left.) Illustration by the Center for Disease Control.

When a tick bites, it usually holds fast to its host. They can be very difficult to remove. Here are some tips for removing a tick, provided by the Center for Disease Control:

Lyme disease symptoms vary from one person to the next. If you suspect that you have symptoms, it is VERY important to see a physician immediately.

In most people, the first sign of an infection is a circular rash that often appears as a bull's-eye pattern around the site of the bite. This rash usually appears within 3 to 30 days after the bite occurs. (See photo.) The rash usually expands over a few days and is sometimes warm to the touch. An infected person may also experience symptoms such as fatigue, headache, fever, muscle aches, joint pain or swollen lymph nodes.

Treatment should be sought right away if you have the above symptoms. The disease is usually easy to cure if treated during the first few weeks. If it is allowed to progress, severe neurological and joint problems can result and these can persist for years.

State health departments reported 29,513 confirmed cases and 13,230 probable cases of Lyme disease to the CDC in 2017. The definition and reporting of probable cases was initiated in 2008 based on revisions to the national surveillance case definition. Chart by the Center for Disease Control.

The first recognized case of Lyme disease in the United States was in 1975. An unusual outbreak of severe arthritis near Lyme, Connecticut called attention to the disease. Since then the number of cases reported has been steadily increasing. (See chart.)

Most cases of Lyme disease are concentrated in a few areas; however, cases have been reported in all 50 US states. Most infections occur in the northeast, in the Great Lakes region, and along the Pacific coast (See incidence map.) Lyme disease can occur anywhere that infected animals live together with ticks that can transmit the bacteria.

Another deadly disease that is transmitted by tick bites is Rocky Mountain Spotted Fever. Most people who develop this disease do not remember being bitten by a tick. Between 2 and 14 days after the bite they begin to experience some combination of fever, rash, headache, nausea, vomiting, muscle pain, lack of appetite, and eye inflammation. Obtaining immediate medical attention is essential to prevent serious illness or even death.

Rocky Mountain Spotted Fever is on the rise in the United States, and its geographic distribution is widespread. A map showing incidence by state and a graph showing the rapid rise in reported human cases are shown on this page.

Knowledge is the best way to stay safe. If you work or play outdoors, especially in the northeastern or north-central United States, it is very important to learn about ticks and tickborne disease. That is the most effective way to improve your chance of avoiding infection.