Home » General Geology » What is a Hydrograph?

What is a Hydrograph? 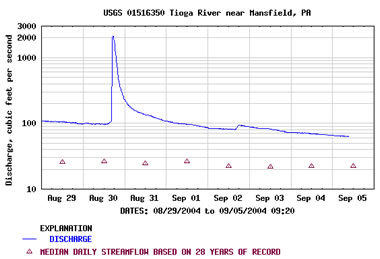 Hydrographs are charts that display the change of a hydrologic variable over time. Here are several examples from the US Geological Survey's gaging station on the Tioga River near Mansfield, Pennsylvania. Although these examples are from a stream, hydrographs can also be made for lakes, water wells, springs and other bodies of water.

This is one of the most frequently created hydrographs. It shows the change in discharge of a stream over time. The blue line on the hydrograph above shows how the discharge of the Tioga River changed between August 29 and September 5, 2004. A rainfall event in the late afternoon of August 30th produced about 1/4 inch of rain in the area of the gage. However, over one inch of rain fell in less than 15 minutes just a couple miles from the gaging station. Runoff from this precipitation caused the Tioga's discharge to rapidly increase from about 100 cubic feet per second to over 2000 cubic feet per second. 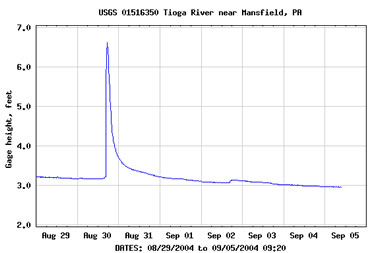 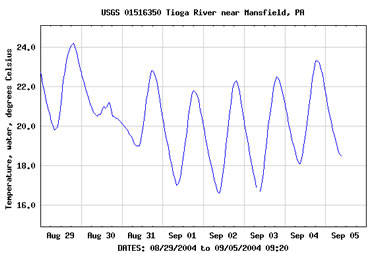 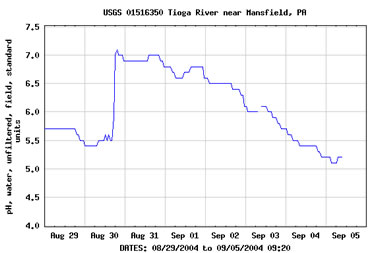 A pH hydrograph shows how the pH of the stream has changed over time. The pH of the Tioga River at this location is generally below 7.0. This low pH is caused by acid mine drainage entering the river at several locations upstream. The sharp increase in pH on August 30 was caused by the large amount of precipitation/runoff (probably with pH of about 7.0) entering the stream. The increased pH level slowly fell over the next few days as runoff and bank storage produced by the rainstorm slowly left the drainage area. 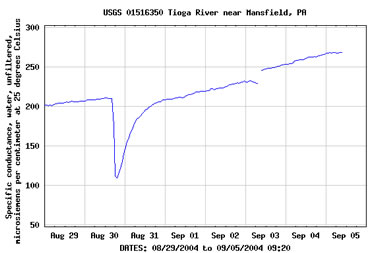 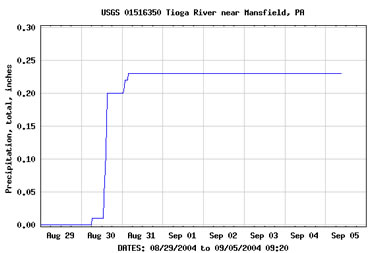 Where Can You Get Hydrographs for Streams Near Your Home?