Map of North Carolina's Natural Gas Basins: Map showing generalized locations of the Triassic basins of North Carolina. These hold sedimentary rocks sequences with organic shales that may be suitable for unconventional natural gas production (after Reid & Milici, 2008). Basemap by Geology.com and MapResources.

Is North Carolina the Next Natural Gas Play?

Although North Carolina has no current oil and gas production, drilling methods developed in other states might be used to tap natural gas reservoirs beneath several North Carolina counties.

New methods of natural gas production are turning previously unproductive rock units across the United States into some of the largest natural gas reservoirs in North America. The Barnett Shale of Texas, the Marcellus Shale of the northeast, and the Haynesville Shale of Louisiana all went from relatively unproductive rock units to reservoirs hosting wells capable of yielding several million cubic feet of gas per day.

These successful gas plays have a few things in common: they are developed in deeply-buried, organic, low-permeability shales that were once marginal producers or unproductive. Today these shales are producing abundant quantities of natural gas through horizontal drilling and hydraulic fracturing. 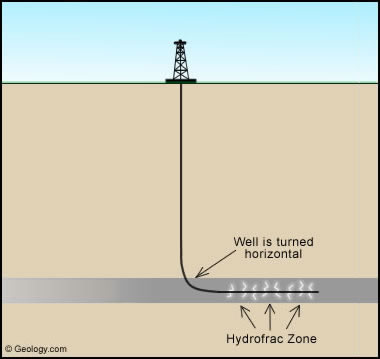 A well enhancement technique known as hydraulic fracturing is also being used in other states. It increases the permeability of the reservoir rock. After a horizontal well is drilled, water is pumped down the well to produce a very high pressure within the reservoir rock unit. This high pressure can fracture the rock, producing a fracture network to drain natural gas from a large volume of rock and allow it to seep into the well.

Rock units in the Dan River Basin and Deep River Basin of central North Carolina are potential candidates for the drilling methods used in other states (see location map at right). Each of these basins contains a sequence of sedimentary rock several thousand feet thick. The potential natural gas reservoirs in these basins are gray and black organic shales that are thought to represent ancient lake sediments, deposited over 200 million years ago. The Cumnock Formation of the Deep River Basin and the Cow Branch Formation of the Dan River Basin both contain organic-rich shales that might yield commercial quantities of natural gas.

The Gas is Just One Piece of the Puzzle

If these rock units are able to yield abundant quantities of gas, two more things will be needed to make them commercial: 1) nearby customers who are ready to buy a steady flow of gas; and, 2) a gas pipeline system that will collect the gas from the wells and transport it to consumers.

Although natural gas companies are normally the ones who drill wells, Universities, local governments and gas-consuming companies sometimes drill wells on their own property, consume the gas on-site or use it to generate electricity. They spend a few million dollars on the well and have a steady flow of gas that might last for years.

Will It Happen in North Carolina?