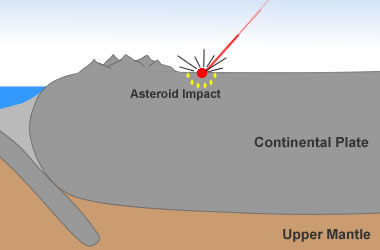 Popigai Crater impact: Large asteroids can hit the Earth at a velocity of 15 to 20 miles per second. This produces an impact that is powerful enough to vaporize rock, excavate a huge crater and blast millions of tons of ejecta into the air. The force at the point of impact exceeds the temperature and pressure required to produce diamonds. If carbon is present in the rocks surrounding the impact site, the formation of diamonds is possible.

What is the Popigai Crater?

About 35 million years ago, an asteroid about 5 to 8 kilometers in diameter, travelling at a speed of about 15 to 20 kilometers per second, slammed into the area that is now known as the Taymyr Peninsula of northern Siberia, Russia. [1] The energy delivered by this hypervelocity impact was powerful enough to instantly melt thousands of cubic kilometers of rock and blast millions of metric tons of ejecta high into the air. Some of that ejecta landed on other continents.

The explosion produced a 100-kilometer-wide impact crater with a rim of deformed rock up to 20 kilometers wide. [2] We now know this feature as "Popigai Crater" or "Popigai Astroblem," the seventh-largest impact crater that has been identified on Earth.

Related:   How Do Diamonds Form?

Evidence of Enormous Heat and Pressure

Today, 35 million years later, researchers have found hundreds of cubic kilometers of tagamite (rock melted as a result of the impact) in the crater. They believe that originally about 1750 cubic kilometers of rock was melted, but about half of that left the crater as ejecta. There are also extensive suevite deposits (breccia formed from fragments of target rock) up to 600 meters thick at the impact site. A layer of suevite covers an area of about 5000 cubic kilometers. [3]

The heat and pressure produced by this impact greatly exceeded what is required for the formation of diamonds at the impact point. A hypervelocity impact of a 5-kilometer-wide object would produce an energy burst equivalent to millions of nuclear weapons and temperatures hotter than the sun's surface. [4] 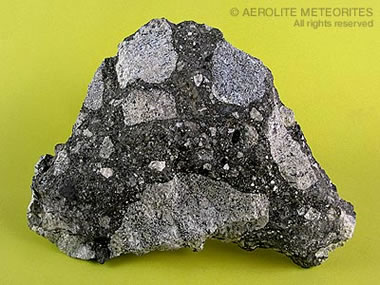 Popigai crater impact breccia: A large 457.7-gram specimen of breccia from the massive Popigai crater in northern Siberia. Note the variety of colors, sizes, shapes and textures within a single mass - the result of a major meteorite impact which threw millions of tons of rock into the air. As fragments fell back to Earth, rocks from different strata were mixed together. Millions of years of heat and pressure compressed those assorted pieces into a solid mass known as an impact breccia. Photograph by Geoffrey Notkin, copyright Aerolite Meteorites.

What Happened at the Point of Impact?

The impact occurred where Archean graphite-garnet gneiss basement rock was overlain by about 1.5 kilometers of sedimentary cover. Rock at the point of impact was instantly vaporized, and an 8- to 10-kilometer-deep crater was blasted through the sedimentary cover and into the underlying gneiss. [5]

The intensity of heat and pressure decreased with distance from the impact point. At a distance of about 12 kilometers out from the point of impact, the conditions were probably still too severe for the formation and survival of diamonds. [5]

The diamonds found today were probably formed in a thin zone of rock located about 12 to 13 kilometers out from the point of impact. This created a shell of diamond-bearing rock about 1 to 2 kilometers thick in the shape of a hemisphere around the point of impact. In this zone, flakes of graphite in the Archean graphite-garnet gneiss were instantly converted into diamond. Researchers estimate that this shell of diamond-bearing rock had a volume of about 1600 cubic kilometers and contained more diamonds than all of the Earth's other known deposits combined. [5] 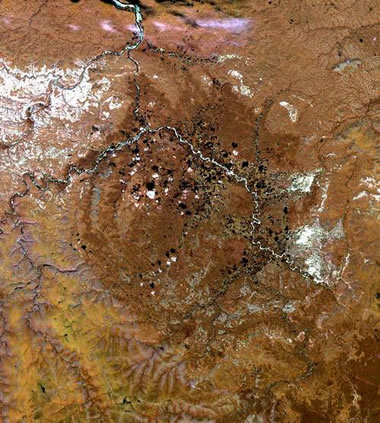 Popigai Crater satellite image: Satellite image of the Popigai impact crater, north of the Arctic Circle in Siberia, Russia. The crater is poorly visible because it has been obscured by ejecta and 35 million years of erosion. Image by NASA. Enlarge image.

What Kind of Diamonds?

In the Popigai impact, the conditions needed to form diamond were present for just an instant of time. This flash formation converted flakes of graphite in the Archean graphite-garnet gneiss into diamond. Many of the diamonds produced were small polycrystalline stones that are approximately the same size and shape as the graphite flakes in the gneiss. Most are tiny stones under 2.0 millimeters in size that might be suitable for producing diamond abrasives. [6] Because these diamonds were formed in a flash of heat and pressure, there was insufficient time for large, single-crystal stones of great clarity and purity to develop. For that reason, Popigai is unlikely to be the site of a gem-diamond mining operation.

Will these Diamonds be Mined?

The diamonds beneath Popigai Crater are probably not a priority mining target. Today, most of the world's industrial diamonds are synthetic stones. For the calendar year 2010, the U.S. Geological Survey reported:

The efficiency and cost of producing synthetic diamonds has steadily improved over the past few decades. It is now cheaper to "make industrial diamonds" than it is to mine them. In 2010 the worldwide production of synthetic industrial diamond was about 4.38 billion carats valued between $1.65 billion and $2.50 billion. This is an average price of about 50 cents per carat or less. Chinese companies produced over 90% of the world's synthetic diamond. [7]

The Popigai Crater is in a remote location above the Arctic Circle, in a difficult environment, with no infrastructure and no local source of employees and support. For the deposit to be mined the diamonds must: 1) be large enough to be recovered and used in industry; 2) have physical properties that are useful to industry; and, 3) be present in high enough concentrations to be economically mined. The Russians have not released any information to confirm that the deposit is minable.

Small amounts of lonsdaleite are reported to be present in the diamond-bearing rocks of the Popigai crater. Lonsdaleite is a rare carbon mineral with a hexagonal crystal structure that has been associated with diamonds in meteorites and at impact structures. Like diamond, it is a mineral that forms under conditions of very high temperature and pressure. It is often referred to as "hexagonal diamond."

Russia as a Diamond Producer

The Russians have significant expertise in diamond mining, synthetic diamond production, and the use of diamond as an industrial material. Alrosa, the state-owned diamond mining company of Russia, produces more natural diamonds than any other company in the world and is a significant producer of lab-grown diamonds. Russia as a country produces more gemstone diamonds than any country other than Botswana. [10] They have been mining diamonds and producing them in labs for a long time. If Popigai was a financial bonanza for any reason, they probably would have been mining it a long time ago.