Extremely rare and can fetch prices of over $1 million per carat. 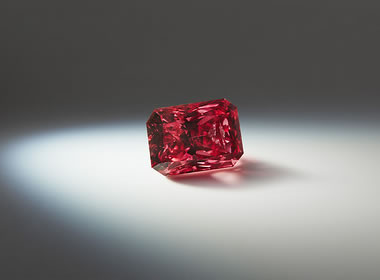 Argyle Isla: The Argyle Isla is a 1.14-carat Fancy red radiant-cut diamond mined from the Argyle Mine in Western Australia. It is one of the most valuable diamonds in the world on the basis of dollars per carat. It was part of the Argyle Tender Heroes sale in 2017. Image Copyright 2017 by Rio Tinto.

What Are Red Diamonds?

Red diamonds are the rarest variety of colored diamonds. In the entire world, only a few diamonds with a pure red hue are found in an entire year. The primary source of those red diamonds has been the Argyle mine in the East Kimberley region of Western Australia, which is scheduled to close in 2020. The color of most red diamonds is caused by glide planes in the diamond crystal, along which carbon atoms have undergone slight displacement. 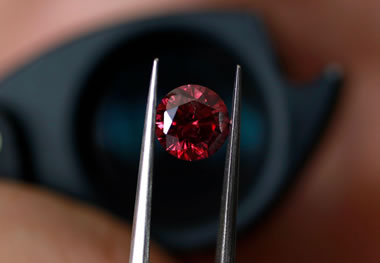 Argyle Phoenix: The Argyle Phoenix is a round, 1.56-carat red diamond discovered at the Argyle mine in Western Australia. It is one of the world's rarest and most valuable gems. It is shown here while being examined through a loupe by Josephine Johnson, manager of Rio Tinto's Argyle Pink Diamonds. The Argyle Phoenix was sold in 2013 for $2,000,000. Photo by David Gray of Reuters / Alamy Stock Photo.

How Rare Are Red Diamonds?

Red diamonds are so rare that between 1957 and 1987, no diamonds with a pure red color were graded by the Gemological Institute of America. [1] The GIA lab grades more diamonds than any other lab in the world, and the fact that no pure reds were submitted for grading over a 30-year period is a strong testament to their rarity.

The Argyle Mine, the leading producer of red diamonds, came online in December of 1985, and that is when a few red diamonds per year started appearing at the GIA laboratory. In the 30-year period between 1987 and 2017, Argyle produced fewer than 20 carats of Fancy red diamonds - and that was from the world's leading source of red diamonds. [2]

Slightly less rare are diamonds with a modified red color. Modifying colors include brown, purple, and orange. These produce diamonds that are brownish red, purplish red, and orangy red.

The diamond market may have an even more limited number of new red stones entering the market, because the Argyle Mine is expected to close in 2020. At present, no new sources of even occasional red diamonds are known. 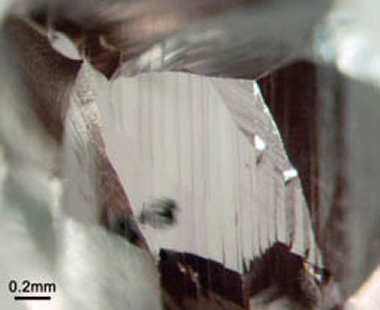 Cause of Color in Red Diamond: In this photomicrograph, you are looking into the interior of a rough diamond through a small polished window on its surface. The pink vertical lines are "graining" caused by plastic deformation of the diamond crystal lattice. Each pink line traces a glide plane within the diamond where carbon atoms have been displaced. In this view, the glide planes intersect the polished window at a right angle. Each glide plane is a defect in the diamond that causes the diamond to selectively absorb green light and selectively transmit red. Note the tiny offsets where the slip planes intersect the edges of the polished window. Photograph by the United States Naval Research Laboratory.

What Causes the Red Color?

The Argyle mine is located in an area of Australia that was subjected to the compressive forces of the Proterozoic Halls Creek Orogen. About 1.8 billion years ago, an ancient continental collision compressed the rocks. These forces are thought to be responsible for dislocating carbon atoms in many of Argyle's diamonds. [3]

This plate tectonics collision was not a sudden deformation like the impact of two automobiles. Instead, the rock masses collided at a velocity of a few centimeters per year. The collision and crustal compression would require millions of years to complete.

The high temperatures and shear stress of the collision are thought to have resulted in plastic deformation in the diamond crystals. The deformation is a slight displacement of carbon atoms along glide planes parallel to the octahedral direction of the crystals.

Light red diamonds are called "pink" diamonds during grading. Fancy Vivid pinks might appear to be "red" to many observers; however, the strict rules of color grading designate them as "pink". Only in very rare situations are enough glide planes present to produce a more intense saturation of color, resulting in a rare and wonderful Fancy red diamond.

Many people do not realize that pink diamonds and red diamonds both have a red color. The difference between "red diamonds" and "pink diamonds" is one of color intensity. During the color grading process, a diamond with a weak to moderate saturation, accompanied by a light to medium tone, will be called a "pink" diamond. The name "red" is reserved for diamonds with a strong color saturation and a medium to dark tone. The name "Fancy red" is given only to those diamonds that exceed the saturation levels of Fancy Vivid pink and Fancy Deep pink.

Many people who are unfamiliar with the procedures used to grade colored diamonds would, at a glance, correctly call a diamond with a very light red color a "pink diamond". Most humans have been conditioned since childhood to use the name pink for objects that have a very light red color.

Many of those same people would, at a glance, think that a Fancy Vivid pink or a Fancy Deep pink was a "red diamond". The grading is stricter than many people expect. The best way to comprehend this is to study the color reference charts for colored diamonds published by the Gemological Institute of America. [4]

In the colored diamond grading system, the name "red" is used so sparingly that only a very few diamonds have an intensity of red color that is able to earn it. A person could hold the opinion that the rarity of red diamonds is more a matter of "grading" than a matter of "color".

A similar use of "red" and "pink" in gemology is in the grading of gem corundum. Corundum with a vivid red color is called "ruby", while corundum with a light red color is called "pink sapphire" or "fancy sapphire". The difference in price between a "ruby" and a "pink sapphire" can be significant. As a result, submitting a gem for grading can be accompanied by anticipation and apprehension.

Glide Planes in Red Diamond: This illustration shows how plastic deformation causes red color in diamond. In the illustration, each gray circle corresponds to a carbon atom in the regular repeating network of atoms in a diamond crystal. During its time in the Earth, the diamond is subjected to forces that cause planes of carbon atom displacement within the diamond crystal. This displacement changes how light passes through the crystal, and the planes selectively cause red light to be transmitted.

Because red diamonds are exceptionally rare, they are studied very carefully before being faceted. The red color is produced by glide planes, called lamellae, within the stone. The goal is to orient the lamellae in a way that will maximize the amount of red light transmission.

The work of the person who plans and executes the cutting of these diamonds is very important. Proper planning and cutting is important for all colored diamonds, but it is especially important when cutting red. Proper cutting can produce a more saturated and even color when the diamond is viewed in the face-up position, resulting in a finished product that is exponentially more valuable.

The Hancock Red had been around for a while. It was cut from rough mined in Brazil, and one of its first owners was Mr. Warren Hancock, a Montana rancher who was also a collector of colored diamonds. Mr. Hancock paid $13,500 for the gem in 1956. At that time very few people were interested in colored diamonds, and most people had never thought about them.

The 1987 sale occurred at a Christie's auction in New York City, a few years after Mr. Hancock's death. The red diamond sold for $880,000, a price of $926,000 per carat - eight times its pre-sale estimate. That was the highest price per carat ever paid for a gemstone of any kind, producing a 6500% profit for Mr. Hancock's estate. The spectacular price brought enormous media and celebrity attention to colored diamonds. [1] [5]

At 5.11 carats, the Moussaieff Red is the largest red diamond known. The rough used to cut the Moussaieff Red was found by a farmer in an alluvial deposit in western Minas Gerais, Brazil. The rough weighed 13.9 carats and was acquired by the William Goldberg Diamond Company in the mid-1990s.

They cut the rough into a triangular brilliant known as The Red Shield. The diamond was purchased by Shlomo Moussaieff in the early 2000s and is now owned by Moussaieff Jewellers Ltd. Sale prices for the diamond have not been revealed. [6]

Sydney DeYoung, a Boston jeweler, purchased an estate jewelry collection at a flea market. Included in the collection was a hat pin with a large brownish red stone that was thought to be a garnet. Sometime after the sale, DeYoung became suspicious about the identity of the stone. It was almost inclusion free, it had no signs of wear, and it had a complex cut. All of these suggested that the stone was not a garnet.

DeYoung took the stone for gemological testing, and the results were shocking. The stone was a 5.03-carat VS2 Fancy brownish red diamond. DeYoung knew that the stone was valuable but passed away in 1986, a year before the 0.95-carat Hancock Red was sold at auction for nearly $1,000,000 per carat. His will directed that the diamond be given to the Smithsonian Institution upon his death.

Today The DeYoung Red is on display at the Smithsonian, in a case that is occupied by some of the world's largest, rarest, and most valuable diamonds. It is the third-largest red diamond known to exist and the only red diamond on public display anywhere in the world. The country of origin of the diamond is unknown. [7] 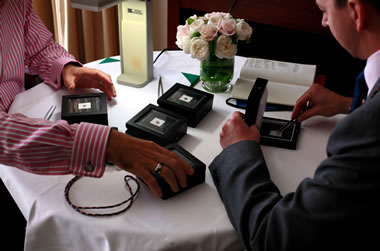 Argyle Pink Diamonds Tender: Every year, from 1984 through 2021, Rio Tinto, the owner of the Argyle Mine in Western Australia, would offer its most beautiful, rarest and most valuable colored diamonds in a silent auction known as a tender sale. Known as "The Argyle Pink Diamonds Tender", the sale was open to selected diamantaires and collectors by invitation only. These selected people and entities would be allowed to examine the few dozen diamonds in the sale and place bids for single stones, groups of stones, or the entire collection. In this photo from 2013, Rio Tinto employees are placing 64 red, pink, dark gray-blue, orangy-pink and purple diamonds, weighing a total of 54.99 carats, into specimen boxes with the expectation that those diamonds will sell for tens of millions of dollars. Photo by David Gray of Reuters / Alamy Stock Photo.

Since 1985, the Argyle Mine in Western Australia has been the source of almost all of the few red diamonds that have entered the market. But, three of the world's most famous red diamonds came from other sources.

The Hancock Red (which sold for $926,315 per carat in 1987) was found in Brazil sometime before its purchase by Warren Hancock in 1956. The Moussaieff Red, the largest red diamond known, was also found in Brazil sometime prior to its acquisition by William Goldberg Diamond Company in the mid-1990s. Finally, the DeYoung Red was purchased at a flea market by Sydney DeYoung before the Argyle Mine opened. The source of the DeYoung is unknown.

The conclusion is that Argyle has not been the only source of red diamonds. Perhaps more will be discovered in the future? 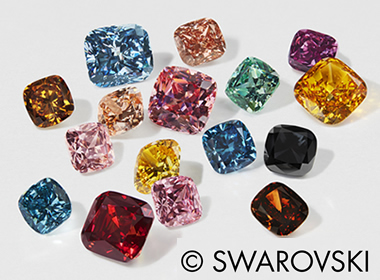 Lab-Created Colored Diamonds: These diamonds are from the Swarovski Created Diamond collection. This collection of colors stands as the most impressive ever seen in the lab-created diamond industry. Photograph by Swarovski Group.

In January 2020, Swarovski Group announced the Swarovski Created Diamond Collection. All of the diamonds in the collection had named colors, and the "intense red" color was named "Heavy Metal Cherry".