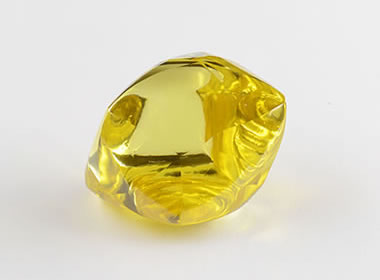 Yellow Diamond Crystal: Almazy Anabara, an affiliate company of ALROSA, discovered this 34.17-carat yellow diamond crystal at its Ebelyakh alluvial deposit in the Yakutia Region of Siberia, Russia. It measures 20.17 x 19.65 x 15.1 millimeters in size. ALROSA is the world’s largest producer of diamonds on the basis of weight. The company has recently been producing a large number of colored diamonds and hopes to become one of the world’s leaders in the production of colored diamonds. Photograph by ALROSA.

What Are Yellow Diamonds?

Yellow diamonds are diamonds that have an obvious yellow bodycolor when viewed in the "face-up" position. The yellow color is usually caused by small amounts of nitrogen contained within the diamond’s crystal structure.

Yellow diamonds with a rich, pure yellow color are the world’s most valuable yellow gemstone [1]. Many people consider them to be the most beautiful yellow gem because of their brightness, fire, and exceptional luster.

Yellow is the second most common fancy color in diamonds, with brown being the most common. Yellow diamonds are found at many diamond deposits throughout the world. They are not unique to a specific geographic area or a specific mine. [2] 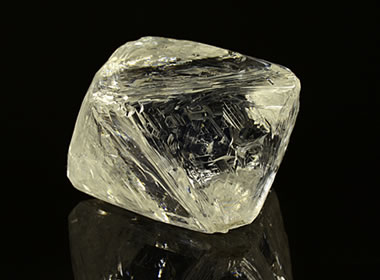 Large Yellow Diamond Crystal: ALROSA recovered this 98.63-carat diamond with a subtle yellow color from its Jubilee Pipe in the Yakutia Region of Siberia, Russia. It measures 29 x 28 x 27 millimeters in size and is covered with interesting triangular dissolution features. This diamond is an example of a stone with a noticeable yellow color that might not have a strong enough saturation to be considered a "fancy-color diamond". Instead it would be graded on the D-to-Z color scale as a Faint, Very Light or Light yellow color. It would make an excellent mineral specimen. Photograph by ALROSA. Click to enlarge.

Nearly all gem-quality diamonds are graded on a color scale that most highly values the absence of color. The most widely used color scale for grading diamonds is the D-to-Z color-grading scale developed by the Gemological Institute of America (GIA). [3]

On the GIA scale, a grade of "D" or "colorless" is the highest grade. Traces of yellow, brown, gray, or any other color within the gem will cause it to receive a lower color grade on the D-to-Z scale.

Below grade "Z" at the bottom of the GIA grading scale, a very small number of diamonds have a yellow color that is strong enough to be obvious and attractive when viewed in the face-up position.

These colored diamonds are rare and highly desirable. They are graded on a special scale according to the strength and quality of their yellow color. These diamonds are said to have a "Fancy" yellow color. On a scale developed by GIA, they are graded as Fancy Light, Fancy, Fancy Intense, Fancy Dark, Fancy Deep or Fancy Vivid according to the tone and saturation of their yellow color. [4] (This reference is for the GIA "Color Reference Charts". If you have a strong interest in colored diamonds, you really need to see these charts.) 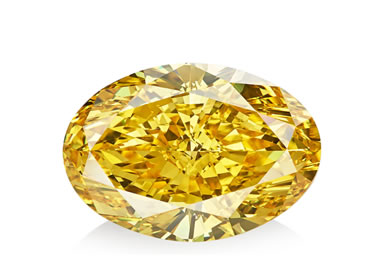 Fancy Vivid Orangy Yellow: In September 2018, ALROSA surprised the diamond market by auctioning a collection of 250 colored diamonds in Hong Kong. Known as the "True Colors" auction, ALROSA intends to make the sale an annual event. The company reports that they will easily be able to support the annual sale because they produce at least 7000 carats of colored diamonds per year. (All of the diamonds in the True Colors sale were cut and polished by ALROSA.) The stone above is an oval-cut, 15.11-carat, Fancy Vivid orangy yellow, VVS2 clarity gem. Diamonds of this size and quality are extremely rare. Photograph by ALROSA.

The most desirable color for a yellow diamond is pure yellow. However, most yellow diamonds have at least traces of a secondary color. Greenish yellow and orangy yellow are common modifications of yellow color in diamonds.

The Role of Nitrogen in Yellow Color

Nitrogen atoms are very small and have the ability to substitute for the carbon atoms in diamond's crystal structure. Trace amounts of nitrogen substituting for carbon in the diamond crystal lattice will cause the diamond crystal to selectively absorb blue light and selectively transmit yellow. This will cause those nitrogen-bearing diamonds to have a yellow color. Nitrogen is the most common impurity that substitutes for carbon and can comprise up to 1% of a diamond on the basis of mass. [5]

Nitrogen can exist in the diamond crystal lattice in a number of ways. One way that influences color is when a single nitrogen atom is shared by four carbon tetrahedrons. This defect is known as the "C center" and is shown in the accompanying illustration. In this configuration, just one nitrogen atom per 100,000 carbon atoms can produce a noticeable yellow color in the crystal. [6] 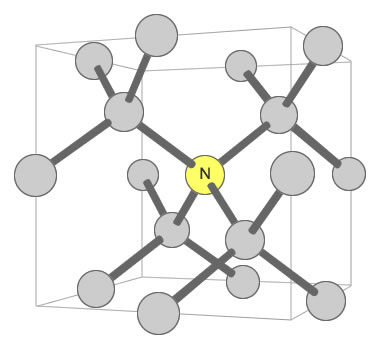 Nitrogen Substitution in Diamond: This diagram illustrates a single nitrogen atom substituting for a carbon atom in the crystal structure of a diamond. This type of substitution is known as a "C center". This type of defect in diamond can produce a yellow color in diamond with as few as 1 nitrogen atom for every 100,000 carbon atoms. Illustration modified after a Creative Commons image by Materialscientist.

This type of nitrogen substitution produces yellow color in lab-grown diamonds but not in mined diamonds. During the long history of natural diamonds, nitrogen atoms usually aggregate into clusters of two or more nitrogens, sometimes combined with a vacant lattice position.

When nitrogen atoms substitute for carbon in the configuration described above, it produces a defect in the diamond crystal which alters how light passes through. The defect causes a selective absorption of blue light. The remainder of the spectrum is transmitted, and that results in the perception of yellow color in the eye of the observer. [2] 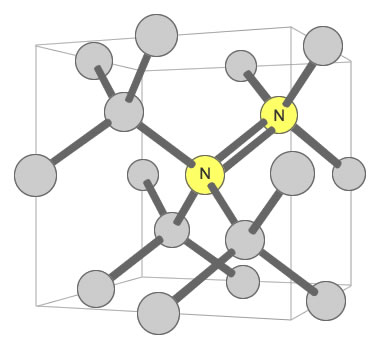 Nitrogen Pair Substitution in Diamond: This diagram illustrates two nitrogen atoms substituting for two carbon atoms in the crystal structure of a diamond. This type of substitution is known as an A-nitrogen center. This type of defect in diamond has only a weak impact on the color of the diamond. Illustration modified after a Creative Commons image by Materialscientist.

Some types of nitrogen substitution in diamond do not produce yellow color. An example is when a pair of nitrogens substitute for carbons in two adjacent carbon tetrahedrons, with one of them shared by four tetrahedrons. This configuration is shown in a second accompanying illustration. Here, the nitrogen has almost no impact upon the color of the diamond. 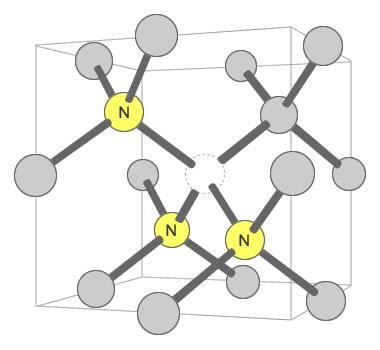 Three Nitrogens and a Vacancy Defect: Yellow color in mined diamonds can be caused by the N3 defect. It consists of three nitrogen atoms substituting for carbon atoms that surround one vacant carbon position. This defect is often accompanied by an N2 defect, and their pairing may contribute to yellow color. Illustration modified after a Creative Commons image by Materialscientist.

A nitrogen defect that produces yellow color in many mined diamonds is the N3 defect. It consists of three nitrogen atoms clustered around a vacant carbon position in the diamond crystal lattice. When an N3 defect is accompanied by an N2 defect, certain wavelengths of blue and violet light are selectively absorbed by the diamond, and yellow light is selectively transmitted. This gives the diamond an apparent yellow color in the eye of the observer. [2]

Two common names used for yellow diamonds are "Capes" and "canaries". The name "Cape" originated in the late 1800s when many diamonds with an obvious yellow color were being produced from mines in the Cape Province of South Africa. They were quickly noticed in the marketplace by diamond professionals who began calling them "Capes" because of their Cape Province provenance.

If graded today, many of these diamonds would be light enough in color that they would receive a color grade within the D-to-Z color scale; however, some would be graded as "fancy-color diamonds". The name "Cape" is still used today by many diamond professionals for diamonds of a light yellow color, regardless of their provenance.

"Canary" is a name used in the gem or jewelry trade for diamonds with an obvious, usually Fancy-grade, yellow color. The name is imprecise because it is used for yellow diamonds that might be in the D-to-Z color scale, or all the way up through the Fancy colors to Fancy Vivid yellow. The name also does not imply any specific provenance. 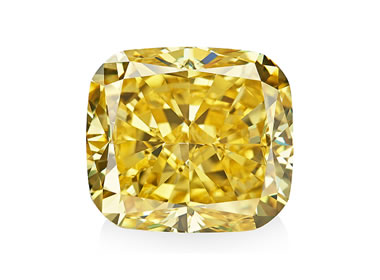 Fancy Vivid Yellow: This is another diamond from the 2018 ALROSA "True Colors" auction. It is an 11.19-carat, cushion-cut, Fancy Vivid yellow diamond of VVS2 clarity. Diamonds of this premium color, clarity and size are extremely rare. Photograph by ALROSA.

The Design and Color of Settings 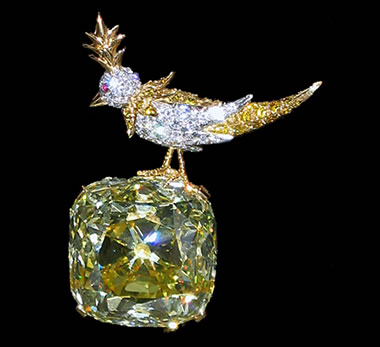 The Famous Tiffany Yellow in its "Bird on a Rock" setting, designed by Jean Schlumberger and first displayed in 1995. Today the Tiffany Yellow is the focal stone of a pendant, on a setting that is adorned with 78 "white" diamonds with a total weight of over 100 carats. Photo by Shipguy, used here under a Creative Commons License.

In 1878 one of the largest yellow diamonds ever found was unearthed at the Kimberley Mine in the North Cape Province of South Africa. The rough diamond weighed 287.42 carats and it was purchased by Charles Tiffany, the New York jeweler who founded the world-famous firm of Tiffany and Company in 1837.

Tiffany's gemologist, George Frederick Kunz, who was only 23 years old at the time, determined that a cushion-cut design would best utilize the rough. However, if he cut the diamond into a cushion cut of standard proportions, the potential of such a large stone would not be realized. So, he designed a special cut that added facets to the crown of the stone to increase its scintillation, and added facets to the pavilion to increase the amount of light returned to the eye of the viewer. The result was a yellow diamond of much higher brilliance. In all, 24 extra facets were added, and the design became known as the modified antique cushion brilliant cut. The finished stone weighed 128.54 carats.

Yellow diamonds have been produced by treating brownish diamonds. These treatments include HTHP (high temperature, high pressure), irradiation, annealing and coating. Some of these treatments can be reversed or altered if the diamond is subjected to heating during jewelry repair. Coatings are often thin layers of silica applied to the surface of the stone. These can be damaged by abrasion, chemicals or heat.

Yellow diamonds that have obtained their color through treatment should always be disclosed and sold for a lower price than similar diamonds with a natural color. The buyer should also be informed of any special care requirements. Many buyers have no interest in treated diamonds. They want gems with a natural color and are willing to pay a premium for them. At the same time, some people are glad to buy a treated stone because it enables them to get a larger diamond for the same price or the same size diamond at a lower price.

Many of the first attempts to produce diamonds in a laboratory resulted in diamonds with a yellow color. Consider that one nitrogen atom per several thousand carbon atoms can impart an obvious yellow color in a diamond. Then consider that nitrogen is the most abundant gas in the air of the laboratory. It was very difficult to keep the nitrogen out of the diamond growing process in the early days of lab-created diamonds.

Today, producers of lab-grown diamonds have better controls over the diamond growing process and are able to exclude nitrogen or introduce it in just the right amount to produce a predictable yellow color. Yellow lab-grown diamonds are available and are priced at a significant discount to mined yellow diamonds.