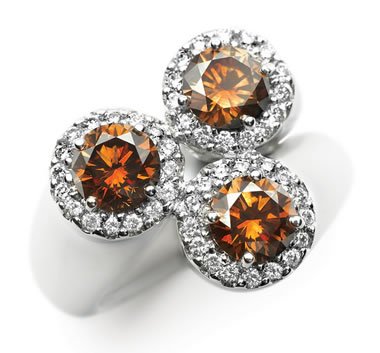 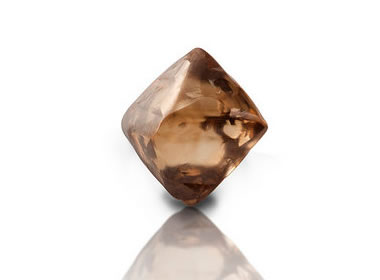 Brown Diamond Crystal: A brown diamond crystal of 8.72 carats produced from the Argyle Mine in Australia. This rough is expected to yield a faceted brown diamond that earns a "Fancy" color grade on the GIA colored diamond grading scale. [1] Image Copyright 2016 Rio Tinto.

What Are Brown Diamonds?

Brown diamonds are diamonds with a brown bodycolor. In the early days of the diamond industry, most brown diamonds were used to manufacture abrasive granules and very few were used in jewelry. In the past few decades, their popularity in jewelry has grown significantly.

When brown diamonds are are cut into tiny gems of as little as 0.01 carat, their brown color is barely noticed. Dozens or hundreds of these tiny diamonds are often used in a single piece of jewelry to add an enormous amount of sparkle.

Although most people think of diamonds as colorless gems, most natural diamonds are a faint to dark brown. For nearly 100 years, De Beers, the company that controlled the diamond industry, did not want brown diamonds in the gem diamond market. They ordered all brown diamonds that they mined or acquired to be sent for industrial use, mostly as abrasive granules. Because of this brown diamonds had very little value. [1]

Then, in the 1980s, owners of the Argyle Mine in Australia had a lot of brown diamonds and a very bold idea. Instead of selling their brown diamonds to De Beers for a pittance, they shipped millions of them to India, where low-cost workers cut them into melee-size gems - many as small as one point in weight. [2]

The tiny brown stones then entered the market in popular-priced jewelry. A dozen or so of these tiny brown gems brought an exciting scintillation to a piece of jewelry. A hundred of them in a pavé setting produced a spectacular result! The attractive appearance and low cost of the jewelry was a great success, and it attracted a new group of buyers to the diamond jewelry market. [2]

Very few people noticed the brown color because the gems were so small and the scintillation so spectacular. 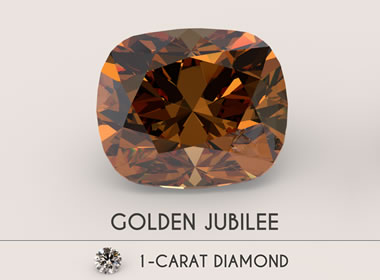 The Golden Jubilee Diamond: The Golden Jubilee is the world's largest faceted diamond. It is a yellowish brown diamond weighing 545.67 carats. It weighs 15.37 carats more than the Cullinan I, which was previously the world's largest faceted diamond. The Golden Jubilee was cut from a 755.5-carat piece of rough found at the Premier Mine in South Africa in 1986. Its "fire rose cushion cut" shape was designed by Gabriel Tolkowsky, who faceted the gem between 1988 and 1990. The specimen in the photo is a replica of the famous gem. A one-carat diamond is shown as a size comparison. Image copyright iStockphoto / DiamondGalaxy.

The world's largest faceted diamond of any color is the 545.67-carat yellowish brown Golden Jubilee. It was cut from a 755.5-carat rough stone found by De Beers at the Premier Mine in 1986. Gabriel Tolkowsky designed the "fire rose cushion cut" specifically for the gem and cut it between 1988 and 1990.

The diamond was exhibited at numerous locations by De Beers to showcase the largest faceted diamond in the world. In 1995, the Golden Jubilee was purchased by a group of Thai businessmen, who also exhibited the diamond at many locations. In 1996 it was given to King Bhumibol Adulyadej of Thailand as a gift from the people on the 50th anniversary of his coronation. [4] [5] This is when the diamond received its “Golden Jubilee” name. Today it is part of the Crown Jewels of Thailand.

Graining in Brown Diamond: This illustration shows how plastic deformation causes brown color in diamond. In the illustration, each gray circle corresponds to a carbon atom in the regular repeating network of atoms in a diamond crystal. During its time in the Earth, the diamond is subjected to forces that cause planes of carbon atom displacement within the diamond crystal. This displacement changes how light passes through the crystal, and the planes selectively cause brown light to be transmitted. The planes are parallel in orientation, and if there are enough of them the diamond will have a brown color to the observer. If the crystal is viewed through a microscope, looking parallel to the orientation of the planes, the edges of the planes will appear as parallel brown lines. They are called "brown graining" because the brown lines are reminiscent of wood grain.

The Origin of Brown Color

Many brown diamonds are thought to derive their brown color from being subjected to stress during their history in the Earth. This stress deforms the diamond crystal lattice which produces a texture known as "graining" within the diamond crystal. This graining is sometimes visible during microscopic examination as a series of parallel to subparallel grain lines similar to the "grain" seen in a piece of wood. [3]

The deformed crystal lattice changes the way that light passes through the diamond. It causes the diamond crystal to absorb certain wavelengths of light, and the visible light that reaches a human eye causes us to see the diamond as "brown".

Brown graining is typical of brown diamonds from the Argyle mine in Australia. Some of the pink diamonds from Argyle receive their pink color from similar graining.

A Bit of Diamond History

In the late 1800s and early 1900s, enormous diamond discoveries in South Africa created a problem. So many diamonds were suddenly available that their free entry into the market would depress prices. De Beers gained nearly complete control of the global diamond supply and released diamonds into the market at a rate that maintained prices.

De Beers then stimulated demand through their "A Diamond Is Forever" marketing campaign. Many advertising experts believe that De Beers ran "the most successful ad campaign in the history of marketing." Growing demand and a tight control over supply made a lot of money for De Beers.

At that time - and continuing today - many people believe that the standard of diamond beauty and value is a clear, colorless stone. De Beers considered brown diamonds unsuitable for jewelry - but was that really true?

One of the first companies to market brown diamonds in the United States was Baumgold Brothers. The company was one of the most productive diamond manufacturing companies in the world in the first half of the 20th century and cut many world-famous diamonds, including the Kimberly, the North Star, the Transvaal Blue, the Transvaal, the Earth Star and the Flaming Star.

In the 1950s and 1960s, they experimented with selling brown diamonds under a variety of enticing names, among which were amber, cappuccino, caramel, champagne, chocolate, cinnamon, coffee, cognac, espresso, mocha and others. They had some success marketing these brown diamonds of subtle color differences under the names but eventually moved on to other business opportunities. [6] 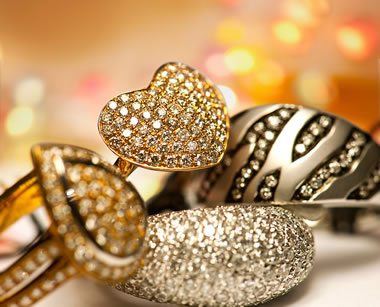 In the mid-1980s the Argyle Mine in the East Kimberly region of Western Australia began producing diamonds. It quickly became the largest diamond producer in the world on the basis of carat weight.

A very small percentage of the rough diamonds mined at Argyle could be cut into stones on the D-to-Z color scale. The mine also produced a small number of colored diamonds in pink, red, blue, and violet colors. But, most of the rough coming out of their mine did not meet De Beers' definition of "gem quality."

About 80% of the Argyle rough was brown, under 0.1 carat in size, and most stones had clarity problems. De Beers, the company who held a near-monopoly on diamond rough at that time, was only willing to pay an industrial-grade price for these diamonds.

Managers at Argyle stopped selling their diamonds to De Beers. They decided to sell their colorless diamonds and fancy-colored diamonds themselves. And, they sent their brown rough to India where skilled but low-cost workers cut it into tiny round brilliant diamonds. Many of these tiny gems were as small as 0.01 or 0.02 carats.

The brown color of the rough was less obvious in gems of this size, and dozens of them could be set in a single piece of jewelry. The jewelry was inexpensive, but hundreds of light-reflecting facets in each piece produced a wonderful scintillation that many people enjoyed. Argyle turned a rejected product into a new and profitable niche in the diamond jewelry market. [2] 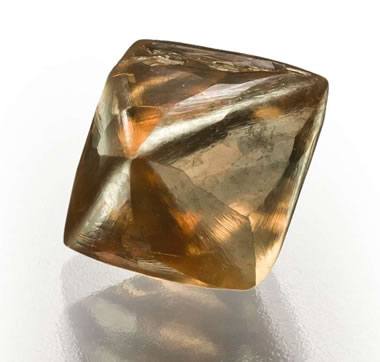 Brown Diamond Crystal: A rough brown diamond exhibiting an octahedral crystal form and a color typical of the Argyle Mine. Crystal is approximately one centimeter from the top termination to bottom. Specimen and photo by Arkenstone / www.iRocks.com.

Fresh, attractive, scintillating, and inexpensive, the Argyle diamond jewelry immediately appealed to many customers. Brown can be beautiful and people purchased these stones because they liked them!

When life gives you lemons, make lemonade. When a mine gives you brown diamonds, you can make your choice of champagne, cognac, or chocolate.   :-) 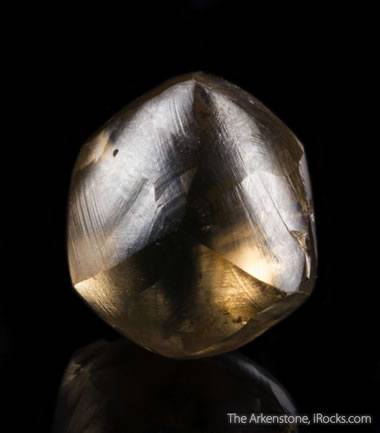 What Are Chocolate Diamonds?

In 2000, Le Vian, a jewelry design and manufacturing company, began acquiring Argyle diamonds in a limited range of brown colors. They called these gems "Chocolate Diamonds ®" and trademarked the name. Many of their "chocolate diamonds" were set in jewelry made from "Strawberry Gold ®" - a Le Vian gold alloy with a reddish color.

Thirty years earlier these "Chocolate Diamonds ®" would have been made into cutting abrasives. Now, they had become a diamond jewelry trademark. At the same time, the words "chocolate diamonds" are now used generically by people who are looking for brown diamonds. [6] The name has been that successful. 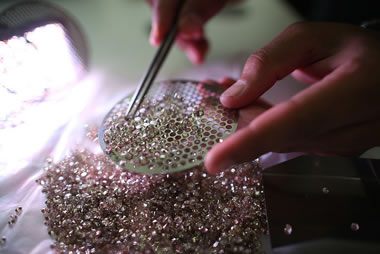 Brown diamonds on the D-to-Z scale will generally sell for prices that are less than similarly graded diamonds without the brown color. In addition, the color was graded with the diamond positioned in the table-down position - so the color grade is a bodycolor rather than the face-up impression of the color.

Beyond the D-to-Z scale, diamonds with a distinct brown color might earn a grade of Fancy Light, Fancy, Fancy Intense, Fancy Dark, Fancy Deep, or Fancy Vivid, depending upon their appearance determined by the combined effect of hue, tone, and saturation. All of these "Fancy" color grades are determined by examining the gem in the face-up position. That makes the color assessment more similar to what a buyer will experience if the diamond is displayed or used in jewelry.

Brown diamonds have uses beyond those in the contemporary women's jewelry described above. The history of brown diamonds being used as a gem goes back for nearly 2000 years, perhaps longer. Rings set with brown diamond crystals were being made by Roman artists between the first and third centuries C.E. [1] At that time methods for cutting and polishing diamonds had not been developed, but setting a natural crystal in a ring was a good alternative.

For the company's first 100 years, De Beers considered brown diamonds to be unsuitable for use in jewelry. Brown diamonds mined by the company or purchased from other producers were sent for industrial use. Many of them were crushed and used to make industrial abrasive granules. The granules were used to line the cutting surfaces on diamond drill bits, grinding wheels, abrasive papers, saw blades and other tools.

Today, brown diamonds from Argyle and other mines are appreciated around the world, especially in the United States fashion jewelry market. They are also gaining popularity among rising middle-class consumers in China and India. [2]

Brown diamonds have become especially popular in men's rings, cuff links, earrings, watches, and other jewelry. Brown is a masculine color. Brown diamonds are attractive and cost less than colorless diamonds of the same size and clarity. Brown diamonds make great sense for men in many ways.