Home » Articles » Where is the Arctic?

Where is the Arctic? What is its Boundary?

Boundaries of the Arctic: This map shows the three boundaries commonly used to define the southern geographic extent of the Arctic: 1) the Arctic Circle (shown as a dashed blue line); 2) the area where the average temperature of the warmest month is less than ten degrees Celsius (shown as a solid red line); and, 3) the arctic treeline (shown as a solid green line). Public domain image from the CIA Factbook, treeline added by the National Snow and Ice Data Center [2]. Click to enlarge.

What Is "The Arctic"?

The Arctic is the polar region of Earth that surrounds the North Pole. It includes the Arctic Ocean, numerous islands, and the northernmost portions of several countries. These include: Canada, Finland, Greenland, Norway, Russia, Sweden, and the United States. Most people can agree with that statement. However, there are some scientific disagreements over how far south the Arctic extends and what marks its southern boundary.

Here are three southernmost boundaries of the Arctic that have been used by many people.

In the paragraphs below we will explore what defines these boundaries. 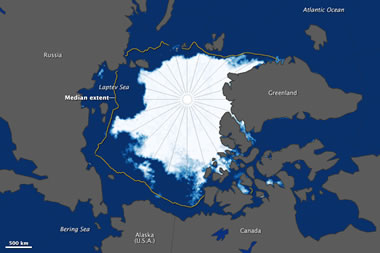 What Is the Arctic Circle?

The approximate location of the Arctic Circle is plotted on the map at the top of this page as a dashed blue line.

The latitude of the Arctic Circle is slowly drifting northward at a speed of about 15 meters per year. On July 2, 2018 it was at approximately 66° 33' 47.2" north of the Equator. This drift has nothing to do with climate change. Instead, the drift occurs because the Earth wobbles on its axis of rotation in a 40,000 year cycle in response to the gravitational attraction of the moon.

To most of the general public, using the Arctic Circle as the defining southern boundary for "the Arctic" is easy and makes total sense. However, some researchers believe that there are better ways to draw a map of the Arctic.

The approximate location of the 10°C isotherm is plotted on the map at the top of this page as a solid red line.

Climate change is pushing Earth’s climate zones northward. The 10°C isotherm provides a constant temperature condition used to define the arctic at a time when its extent is shrinking.

What Is the Arctic Treeline?

The arctic treeline is the northern geographic limit of tree survival. North of the treeline, temperatures are so cold that trees are killed when their inner sap freezes in winter. North of the treeline, trees are unable to easily grow root systems deep into the frozen soil. This deprives them of the nutrients and structural support that they need for survival. Many other types of plant life are limited by these conditions, and the fauna that depend upon the plants are also limited.

Some researches like to use the treeline as a southern limit of the arctic because it is a visible change in the landscape and a severe change in lifeforms. Some researchers believe that it is a logical southern boundary for the arctic.

The approximate location of the treeline is plotted on the map at the top of this page as a solid green line.