Highest Waterfall in the World

Angel Falls has a total height of 3212 feet! 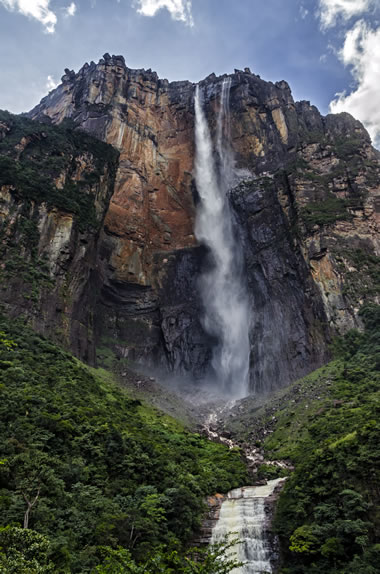 Angel Falls: A view of Angel Falls showing the world's longest uninterrupted drop of water. It starts as multiple streams of water at the top of the sandstone cliff of the Auyán-Tepuí, and descends as a thick cloud of mist at the base of the drop. The water than cascades down a steep slope to smaller waterfalls below. Photo copyright iStockphoto / jimmyvillalta. Click to enlarge.

Which Waterfall Is Tallest?

Angel Falls in Venezuela is the world's tallest waterfall, with a total height of 3212 feet (979 meters). This total height includes a single uninterrupted drop of 2648 feet (807 meters), plus 564 feet (172 meters) of steep cascades and smaller drops downstream from the main falls. [1]

The waterfall was measured in 1949 by surveyor Perry Lowrey, during an expedition funded by National Geographic and led by Ruth Robertson. [1]

Where Is Angel Falls?

Angel Falls is located in the Canaima National Park, which lies within the Bolivar State of southeastern Venezuela. The park is treasured so much that it has been named a UNESCO World Heritage site. [2] 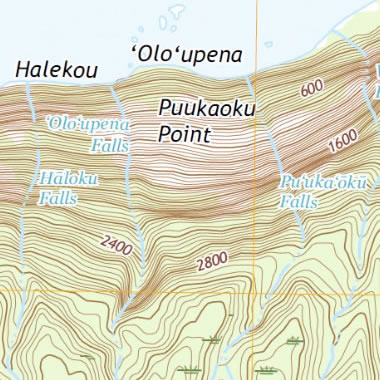 Angel Falls was named for James Angel, an American pilot, who in 1933 was the first aviator to fly over the falls. [3] Within a few years, Angel's story of a "mile-high waterfall" had been widely publicized through stories and trivia items in popular media. [4] This occurred before the height of the falls was properly measured and before the name Angel Falls was in popular use.

The first official use of Angel's name associated with the falls was on a map published in 1939 by the government of Venezuela as part of their report titled Exploración de la Gran Sabana ("Exploration of the Great Savannah"). [3]

Angel served as a pilot and guide to the leaders of the project between 1933 and 1939. He enjoyed showing them "My Waterfall".

On a map within the project report, the name "Salto Ángel" was printed at the location of the falls. [3] That name is still used for the falls in Spanish-speaking countries.

Ruth Robertson's expedition to the falls, and Perry Lowrey's survey of their height, did not occur until 1949.

In 2009, Hugo Chávez, President of Venezuela, declared that Kerepakupai-merú should be the country's official name for the falls. It is an indigenous name from the Pemón natives meaning "falls from the deepest place". 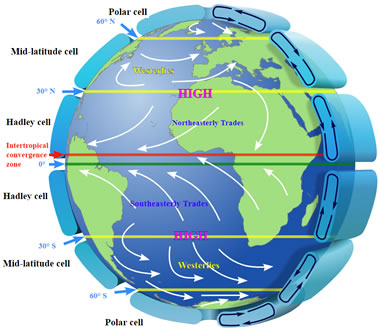 The Northeasterly Trades: The atmospheric circulation model above shows how the Northeasterly Trade Winds deliver air masses from the arid regions of western Africa to northeastern South America. On their way, evaporation from the surface of the Atlantic Ocean fills these air masses with water, which will fall as rain when they are cooled rising the eastern slope of the Auyán-Tepuí. Image by NASA. 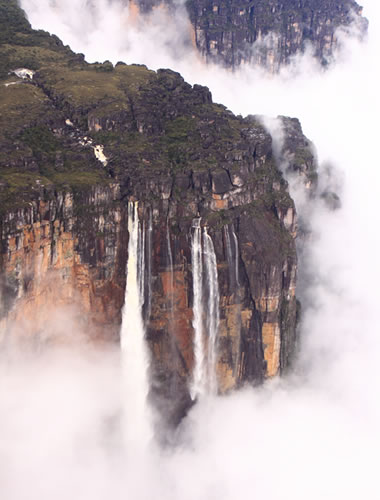 The Upper Falls: This photo is a view of the seldom-seen and generally ignored waterfalls and channelized cascades upstream from Angel Falls. The next time the height of Angel Falls is surveyed, perhaps they should be considered as a potential addition to the total height?

In this photo, you can also see that most of the falls' water is emerging from cavities that follow bedding planes in the massive sandstone. A minor amount of water emerges from fracture cavities.

The volume of channelized flow and how the water begins its fall will certainly vary depending upon recent weather and time of year. Photo copyright iStockphoto / khyim. Click for a larger view.

The Journey of the Water

Much of the water of Angel Falls begins its journey in the Atlantic Ocean. There, the northeasterly trade winds deliver dry air masses from the Sahara Desert of Africa. These winds evaporate water from the ocean surface and carry it towards South America.

As the moisture-laden air masses reach southeastern Venezuela, they rise to cross the highlands of the Auyán-Tepuí - the headwaters of Angel Falls. The air masses cool as they rise, causing water vapor to condense and fall as rain.

Some of the rain soaks into the ground and enters a network of subsurface fractures and caverns beneath the Auyán-Tepuí. Other water runs off and flows into tributaries of the Rio Kerepacupai Meru, the river that feeds the falls. The river meanders across the top of the Auyán-Tepuí, heading towards a cliff on its northern edge.

The excitement begins about 500 feet from the cliff...

...suddenly, the river drops into a fracture system, changes flow direction by 135 degrees, and accelerates through a channelized cascade of white water. Just before reaching the falls, the water drops into fractures and caverns, then bursts into the air through openings below the top of the sandstone cliff. There it begins a dramatic free-fall of 2648 feet.

Upon landing, the water begins flowing over, under, and around rock debris that has fallen from the cliffs above. It then cascades down a steep slope, over smaller falls, on its way to the Rio Churún.

The Future of Angel Falls

Angel falls has been in its current location for thousands of years. It will remain there until gravity pulls another block of the highly fractured sandstone away from the mountain. The block will fall to the ground and explode into a catastrophic rain of rock. The river will flow without interruption, but the position of the waterfall will change.

A Destination for the Adventurous

There is no cheap, quick, and safe way for a person from the United States to visit Angel Falls today. Historically tourists started by flying to Caracas, Venezuela. There, they would join a prearranged 5-day trip that would take them to Canaima National Park, make a short visit to Angel Falls, and start their return trip to Caracas.

The CIA Factbook is a trusted source of information for United States citizens who plan international travel. Their website contains this warning: "The US Department of State currently warns US citizens to NOT TRAVEL to Venezuela due to crime, civil unrest, poor health infrastructure, kidnapping, and arbitrary arrest and detention of US citizens." Read the full details of their warning at the link in the reference box. [5]