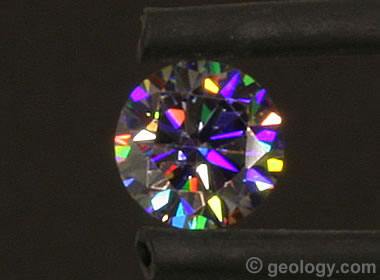 Strontium Titanate: A faceted strontium titanate showing its very strong "fire" or "dispersion." Light that enters the stone is separated into its component colors, similar to a prism, and exits the stone in a scintillation of color. This stone is a 6-millimeter round weighing about 1.25 carats. The stone has a slightly purple body color that provides contrast to the dispersion.

What is Strontium Titanate?

Strontium Titanate is a man-made material with a chemical composition of SrTiO3. It grabbed public attention in the early 1950s as a diamond simulant - a material that has an appearance that is very much like diamond but has a different composition and/or crystal structure.

A demonstration of dispersion: White light is separated into its component colors while passing through a prism. The "fire" of faceted stones like diamond and strontium titanate is produced by dispersion. NASA Image.

The Rise and Decline of Strontium Titanate

The impressive fire of strontium titanate made the stone a rapid success in the jewelry trade. People loved the intense fire and the lower price compared to diamond, and many purchased strontium titanate instead of diamond. Many people bought it just because they loved its appearance.

Between the early 1950s and the early 1970s, Fabulite, Diagem, and the other strontium titanate brands were popular sellers. Then, many people who purchased strontium titanate jewelry and wore it regularly began to notice that their stones were showing signs of wear. The facet faces were often scratched, and facet edges were often nicked and chipped. A material with a Mohs hardness of 5.5 does not stand up to wear like diamond with a hardness of 10, or ruby and sapphire with a hardness of 9.


Competition From Other Diamond Simulants

Strontium titanate does not have the hardness and toughness of diamond, and that was a problem. It has a hardness of 5.5 -- low enough that contact with many common objects could result in a scratch or a damaged facet edge. This deficiency allowed newly developed simulants a place in the market.

In the 1990s, synthetic moissanite began to replace YAG, GGG, and CZ in many of their uses. Its appearance is very similar to diamond, but it has a hardness and fire that is superior to all of these simulants from the 1970s. Cubic zirconia remains an important diamond simulant because its price is much lower than synthetic moissanite.

Today, strontium titanate is seldom seen in jewelry; however, it still has a more impressive fire than any natural or lab-created gemstone that is frequently seen in jewelry. It remains an attractive and satisfactory stone for earrings, pendants, and brooches that will encounter little abrasion or impact.

Naturally occurring strontium titanate was not known as a mineral until its discovery in 1982. It was first found in Eastern Siberia, Russia, and later occurrences were found in Paraguay and Japan. It is a very rare mineral, found in tiny cubic crystals, crystal clusters, and irregular masses. Natural specimens are typically so small and so rare that they have no commercial use beyond mineral specimens.

Use of Strontium Titanate

Strontium titanate was a very popular diamond simulant in the 1950s through the 1970s and was sold under a variety of trade names. Although its surprising fire captured the attention of consumers, its lack of durability resulted in consumer disappointment. It was replaced by materials such as YAG and cubic zirconia that are superior in hardness but inferior in dispersion.

Strontium titanate was originally manufactured by the National Lead Company (currently NL Industries), a company that produces a wide variety of lead, titanium, and strontium products for high-tech industries. In addition to its use as an attractive jewelry stone, strontium titanate is used in optical instruments, high-voltage capacitors, voltage-dependent resistors, advanced ceramics, and substrates for superconductors.