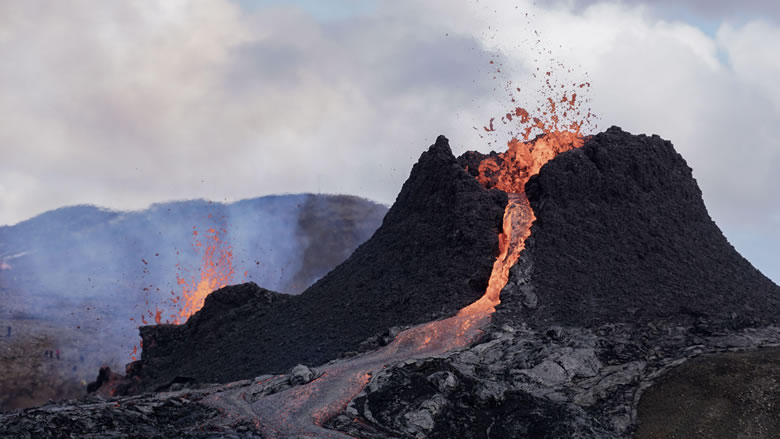 Spatter Cones erupting at Fagradalsfjall Volcano, Southwest Iceland, in March 2021. This cone shows how some spatter cones overflow, sending a flow of highly fluid basaltic lava onto nearby lands. Often the overflowing lava will erode a channel through the side of the cone. Note how the sticky chunks of basaltic lava have built up a very steep cone. Spatter cones are much steeper than cinder cones because loose cinders cannot be piled up into such a steep cone. Photograph by Daniel Freyr Jónsson / Alamy Stock Photo.

What is a Spatter Cone?

A spatter cone is a small, steep-sided volcanic cone built up around a vent where escaping gases blow out chunks of molten lava. The chunks of molten lava are torn apart as they fly through the air and fall close to the vent before solidifying. Upon impact the still-molten lava welds to previously erupted material, building up a steep cone of "spatter", also known as "agglutinate".

Spatter cones are small, usually less than 30 feet tall, and circular in shape. They are a common feature where highly fluid basaltic magmas are erupted. A few spatter cones are built from carbonatite lava. Carbonatite is a rare igneous rock composed of carbonate minerals. 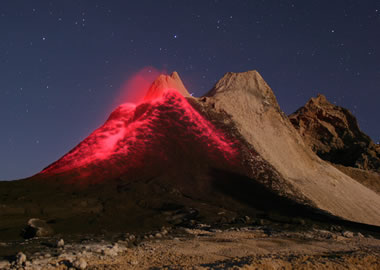 Carbonatite Lavas can produce spatter cones. Carbonatite lavas have a very low viscosity and flow like motor oil. They have a unique magenta incandescence. The spatter cone above is at Ol Doinyo Lengai volcano in Tanzania. Photograph by Martin Rietze / Alamy Stock Photo.

Cinder cones and spatter cones are very similar features. But, here is the important difference: cinder cones are built up of loose clinkery materials (usually a rock named scoria) that you can easily pick up and examine. However, pieces of spatter are mostly welded together.

To examine a piece of spatter, you might need to break it free with a hammer. However, many spatter cones are in parks or other protected areas - where breaking up the rocks might get you in serious trouble. If that is the case, you would need to get as close as possible for a visual inspection. 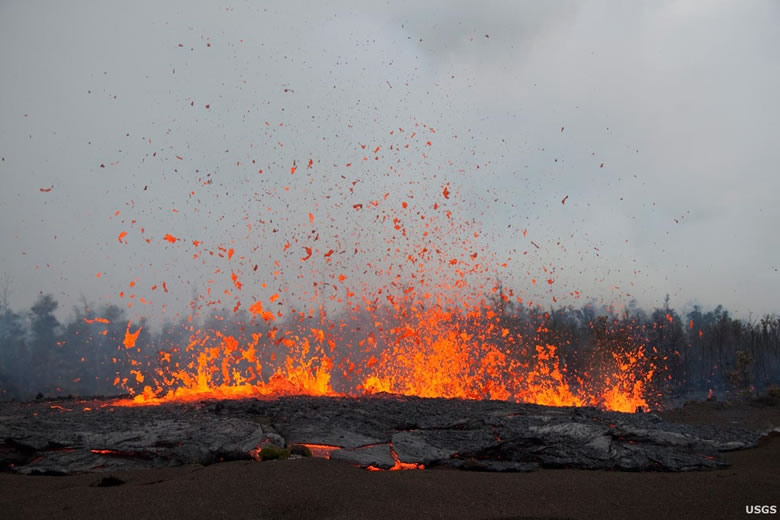 Fissure Eruptions often produce spattering lava. The chunks of molten lava usually fall on both sides of the fissure, building up mounds known as "ramparts". Photo by the United States Geological Survey, taken at Kilauea during a 2011 eruption.

Many spatter cones grow along fissures (fractures in the Earth where lava can erupt onto Earth's surface). If the fissure is erupting at only one or a few locations, then spatter cones might grow. However, if the entire fissure or sections of the fissure are erupting, a mound of spatter might accumulate on both sides of the fissure. This mound of spatter is known as a "rampart". A photo of an active fissure eruption building a rampart can be seen in the photo above from Hawaii's Kilauea volcano. 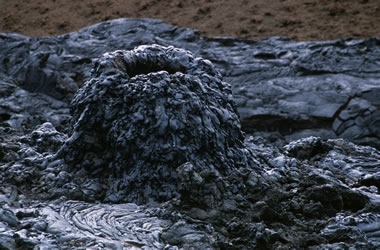 Hornito on a pahoehoe lava flow on Santiago Island, Galapagos, Ecuador. This hornito is reported to be about 100 years old. Photo by Gary Irvine / Alamy Stock Photo.

Hornitos are small mounds of spatter that usually form on the thin crust of a pahoehoe lava flow. They form where a small amount of lava escapes to the surface from a lava tube below. They are not considered to be a "volcano" because they are not connected to a true magma source at depth. Please see the accompanying photo.

Where are Spatter Cones?

Spatter cones and ramparts built by fissure eruptions have formed in many parts of the world. The list below contains some of the better-known locations where historic (inactive) spatter cones are present.