Utica Shale - The Natural Gas Giant Below the Marcellus

Figure 1: The green area on this map marks the geographic extent of the Utica Shale. Included in this extent are two laterally equivalent rock units: the Antes Shale of central Pennsylvania and Point Pleasant Formation of Ohio and western Pennsylvania. These rocks extend beneath several U.S. states, part of Lake Erie, part of Lake Ontario and part of Ontario, Canada. If developed throughout this extent, the Utica Shale gas play will be larger than any natural gas field known today.

This map was compiled by Geology.com using data provided by the Energy Information Administration [1] and the United States Geological Survey [2].

What is the Utica Shale?

The Utica Shale is a black, calcareous, organic-rich shale of Middle Ordovician age that underlies significant portions of Ohio, Pennsylvania, West Virginia, New York, Quebec and other parts of eastern North America (see Figure 1). In the subsurface, the Utica Shale is located a few thousand feet below the Marcellus Shale, which has become widely known as a source of natural gas (see Figure 2).

The Utica Shale has not been extensively developed for two reasons: 1) its great depth over much of its geographic extent, and, 2) its limited ability to yield gas and oil to a well because of its low permeability. This is starting to change as horizontal drilling and hydraulic fracturing are used to stimulate production. These methods were not extensively used in the Utica Shale prior to 2010.

Figure 1a: This map shows an example of the extremely high drilling density of horizontal wells in the eastern Ohio portion of the Utica Shale. There must be a "sweet spot" down there!

The Marcellus was the Opening Act

The Marcellus Shale is another organic-rich rock unit that historically attracted limited commercial interest because of its low permeability. However, that changed in 2003 when Range Resources began drilling productive wells into the Marcellus using horizontal drilling and hydraulic fracturing technologies. These methods solved the low permeability problem and produced fractures that allowed fluids to flow through the rock unit and into a well.

Now, just a few years later, the Marcellus Shale has become one of the world's largest natural gas fields, and the Utica Shale - located a few thousand feet below the Marcellus - has become a new drilling target.

It is impossible to say at this time exactly how large the Utica Shale resource might be because it has only been lightly drilled in western Pennsylvania and in the St. Lawrence Lowlands of Quebec, Canada. In central Pennsylvania, where the Utica is deep below the Marcellus, it is virtually untested with horizontal drilling and hydraulic fracturing. Limited testing suggests that the Utica Shale will be an enormous fossil fuel resource.

Figure 2: Generalized stratigraphic sequence of rock units surrounding the Utica Shale and Marcellus Shale. The Utica and Marcellus are so geographically extensive that it is impossible to present a stratigraphic sequence that would be correct in all areas. This diagram presents a generalized sequence of rocks that might be present in central and western Pennsylvania. Image by Geology.com.

How Deep is the Utica Shale?

These depth relationships of the Utica Shale and the Marcellus Shale are shown in the generalized cross sections shown below as Figure 5a and Figure 5b.

Figure 3: Approximate elevation for the base of the Utica Shale (top of the Trenton/Black River Limestones). Elevations shown on the map are feet below sea level.

This cross section was compiled by Geology.com using data provided by the Energy Information Administration [1], the United States Geological Survey [2], the Pennsylvania Geological Survey [3], and the U.S. Department of Energy [4]. 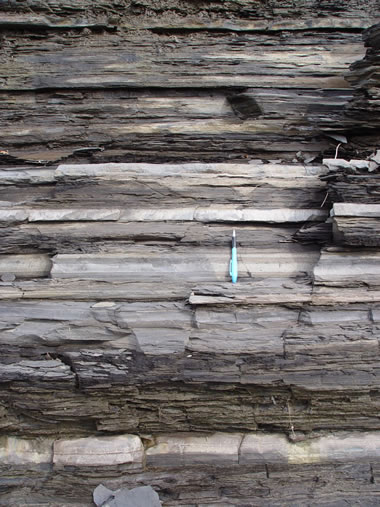 Figure 4: Photograph of the Utica Shale near the town of Donnacona, Quebec, Canada. Dark beds are shale, light beds are limestone. Part of the dark color in the Utica Shale comes from organic matter. A writing pen is shown for scale. Image and caption by The National Energy Board of Canada; from A Primer for Understanding Canadian Shale Gas. [10]

This cross section was compiled by Geology.com using data provided by the Energy Information Administration [1], the United States Geological Survey [2], the Pennsylvania Geological Survey [3], and the U.S. Department of Energy [4].

Figure 6: Thickness map of rocks present between the top of the Trenton/Black River Groups and the top of the Utica Shale. In some areas the Point Pleasant Shale and the Antes Shale are included in this thickness.

This map was compiled by Geology.com using data provided by the Energy Information Administration [1] and the U.S. Department of Energy [4].

Thickness of the Utica Shale

The thickness of the Utica Shale is variable. Throughout most of its extent, it ranges in thickness from less than 100 feet to over 500 feet. Thickest areas are on the eastern side of its extent, and it generally thins to the northwest. A thickness map of the Utica Shale is shown as Figure 6. Although thickness of a rock unit is important in determining its oil and gas potential, the organic content, thermal maturity and other characteristics must all be favorable.

The Utica Shale is an organic-rich rock unit. The organics are what give it a dark gray to black color - and hydrocarbon potential. The amount of organic material in the shale varies throughout its extent and also varies vertically within the rock unit.

A map of the regional variation in total organic carbon is shown as Figure 7. The organic carbon content is generally highest in the center of the rock unit's extent and decreases towards its margins. 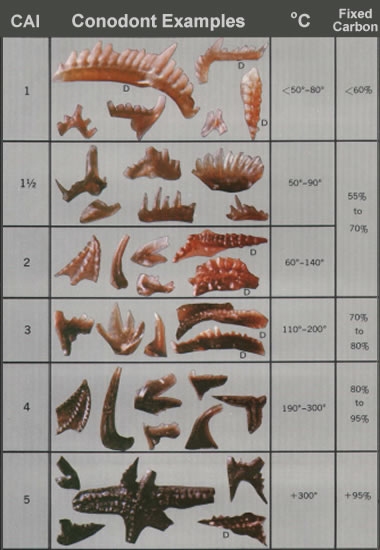 Conodonts are microfossils of eel-like animals that lived in marine environments from the Cambrian through Triassic Periods. They are composed of calcium phosphate and range in size from about 0.2 to 6 millimeters. (See Figure 8.) They are useful in determining the age of a rock unit and correlating rock units from one location to another.

When heated, conodonts change color through the sequence shown in Figure 9, according to the temperature of the surrounding rocks. This progressive color change has been linked to rock temperatures by the "conodont alteration index" (or "CAI"). The color progression is not reversible and records the maximum temperature to which the rocks have been heated.

The significance of Utica Shale CAI is shown on the map in Figure 10. The area between CAI 1 and CAI 2 is where crude oil is likely to be found in the Utica Shale. Where the CAI is greater than 2, natural gas is likely to be the dominant hydrocarbon.

Figure 11: Location of the oil and gas assessment units for the Utica Shale determined by the United States Geological Survey. The area in green is where wells are likely to encounter crude oil. The area in pink is where natural gas is likely to be the dominant hydrocarbon.

In September 2012, the United States Geological Survey published an "Assessment of Undiscovered Oil and Gas Resources of the Ordovician Utica Shale of the Appalachian Basin Province, 2012". [15]

They identified two assessment units in the Utica Shale. The geographic areas covered by these units are shown on the map in Figure 11. Their Utica Shale Gas Assessment Unit (Gas AU) is defined where the thermal maturity of the organic matter is greater than a CAI of 2, and where the total organic carbon is greater than 1 weight percent.

Figure 12: Utica Shale USGS "sweet spots." This map shows the expected optimal areas for developing the Utica Shale according to the USGS assessment of 2012. Generally, these areas are where the Total Organic Carbon (TOC) content of the Utica Shale is high. (See Figure 7 for TOC map.)

The generalized cross sections for the Utica and Marcellus Shale shown above as Figures 5a and 5b illustrate why the Utica is being developed in some parts of Ohio and Canada instead of the Marcellus.

The Utica Shale is proving to be rich in oil and natural gas liquids. On an energy-equivalent basis, these wells are worth significantly more than wells that produce natural gas alone. The Ohio Department of Natural Resources estimates a recoverable Utica Shale potential between 1.3 and 5.5 billion barrels of oil and between 3.8 and 15.7 trillion cubic feet of natural gas. Companies interested in drilling the Utica Shale have been flooding ODNR with permit applications (see chart).

Press releases from Chesapeake Energy reported several wells with peak rates of over five million cubic feet of natural gas per day along with hundreds to thousands of barrels of natural gas liquids. Optimism based upon these drilling results prompted Chesapeake to claim that their Utica Shale assets added over $15 billion in value to the company.

Having achieved successful results from recent drilling activities in eastern Ohio, Chesapeake is announcing the discovery of a major new liquids-rich play in the Utica Shale. Based on its proprietary geoscientific, petrophysical and engineering research during the past two years and the results of six horizontal and nine vertical wells it has drilled, Chesapeake believes that its industry-leading 1.25 million net leasehold acres in the Utica Shale play could be worth $15 - $20 billion in increased value to the company.[12]

"Your oil or gas could be produced or captured from a well outside your property tract boundaries. In fact, your only protection is if your oil or gas property is subject to the Oil and Gas Conservation Law, 58 P.S. § 401.1 et seq. If so, the gas on your property could be included in a unitization or pooling order issued by the Commonwealth at the behest of a producer on a neighboring tract. That well operator would then have to pay you a production royalty based on your prorated share of the production from the well, depending on how much of your tract was deemed to be contributing to the well's pool. This law applies to oil or gas wells that penetrate the Onondaga horizon and are more than 3,800 feet deep."

Future Development of the Utica Shale

Two important challenges for developing the Utica Shale in Pennsylvania are its significant depth and a lack of information. In areas where the Marcellus Shale is present, the Utica Shale is probably going to be a resource of the distant future. The Marcellus Shale is less expensive to develop, and companies will focus on it before setting their sights on a deeper target with an uncertain payoff.

However, in areas where the Marcellus Shale has been developed, the Utica will have an infrastructure advantage. Drilling pads, roadways, pipelines, gathering systems, surveying work, permit preparation data and landowner relationships might still be useful for developing the Utica Shale.

The Utica Shale underlies parts of Lake Erie and Lake Ontario. These areas likely contain natural gas. It is possible that offshore drilling will occur in the lakes in the very distant future.