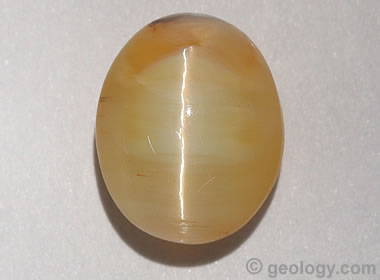 Cat's-Eye Opal: This yellow-orange cat's-eye opal was cut from rough mined in Madagascar. It measures 13.6 x 11.3 x 6.9 millimeters in size and weighs 5.98 carats. If you look closely you might be able to perceive that the parallel mineral fibers cross the line of the eye at a right angle. This opal has not received any treatment.

Cat's-eye opal is a phenomenal opal that exhibits chatoyance when properly cut into a cabochon. The chatoyance is a bright line of light across the surface of the stone caused by reflections from tiny parallel mineral needles or hollow tubes that span the width of the gem. 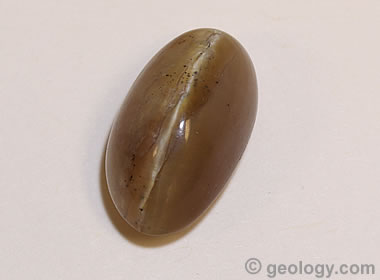 When viewed under a source of incident light, the "eye" will respond in three different ways. It will move across the surface of the stone: 1) if the stone is moved, 2) if the light source is moved, or 3) if the head of the observer is moved. This "moving eye" is what makes chatoyant gems so interesting. 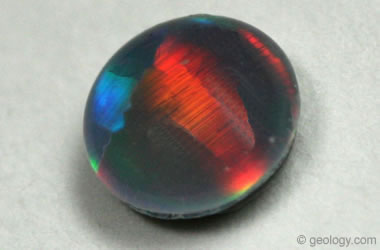 Unusual Cat's-Eye Opal: The gem above is an example of "cat's-eye" opal not caused by parallel inclusions or tubes within the gem. Instead the cat's-eye is thought to be caused by "faults" or "misalignments" of the minute silica spheres that produce its play-of-color. These can be seen as the fine parallel lines deep within the stone. This specimen was cut from opal mined from the Constellation Opal Mine near Spencer, Idaho.

An unusual variety of cat's-eye has been seen in precious opal found near Spencer, Idaho. The feature within this opal that produces the cat's-eye is thought to be "faults" or "misalignments" of the minute silica spheres, whose orderly arrangement is responsible for the play-of-color phenomenon. [1]

This variety of cat's-eye was first reported by J.V. Sanders, who also found asterism in opals from the same deposit. Previously, J.V. Sanders was the first person to convincingly explain the play-of-color phenomenon in opal. [2] 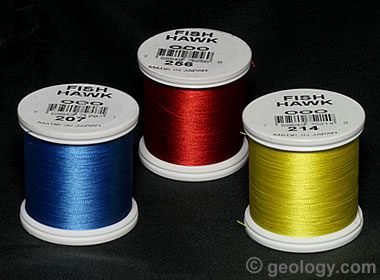 Cat's-Eye On Silk: Silk thread is highly reflective. The light shining on the spools of thread reflects to form a broad lustrous line. A line of light similar to the "eye" of a gemstone is displayed along the surface of the spool at the right angle intersection of the observer's line of sight and a plane tangent to the spool's cylindrical surface.

A special type of rough is required to cut an opal cabochon that exhibits a cat's-eye. First the rough must contain a large number of thin reflective mineral needles or hollow tubes with a parallel orientation.

Then the rough should be prepared so that the mineral needles will be parallel to the base of the cabochon. The cabochon is then cut into a circular shape or into an oval with the needles oriented parallel to the short axis of the oval. The dome of the cabochon is then cut and polished. This will produce a round cabochon with an eye, or an oval cabochon with an eye that bisects the stone into two equal parts along its longest dimension. 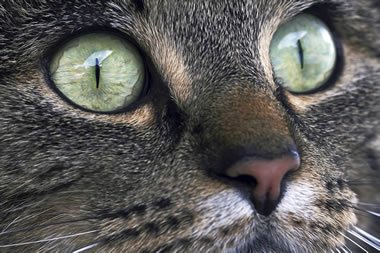 Why It's Called Cat's-Eye: A cat's eyes respond to bright light by closing their pupils to a narrow slit. This is where the "cat's-eye" gemstone name originates. Image copyright iStockphoto / Astrid Gast.

Cat's-eye opal is a rare and unusual find. We always look for interesting opals when we visit the Tucson Gem and Mineral Show and while we are viewing gems on the internet. We have only seen cat's-eye opal a few times, and usually the only locality information available for the material is "Africa". We purchased a few cabs from GemSelect that were cut from rough found in Madagascar.

We have seen beautiful semitransparent orange and orangy yellow cabs cut from rough found in Tanzania offered for sale by AJS Gems. Mindat lists one locality for cat's-eye opal in Western Australia.

Much of the material that we have seen offered for sale as "cat's-eye opal" has a "brecciated" appearance that causes deviations in the line of the eye. It isn't pretty. We have also seen opal from Idaho labeled "cat's-eye opal", but there were no obvious mineral crystals or tubes reflecting the light, with a weak eye that is only visible across a portion of the cab.