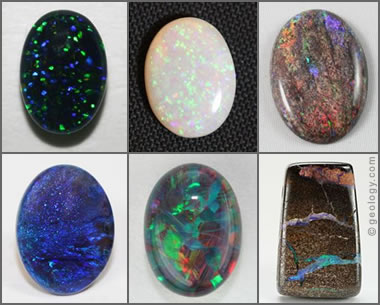 What is Precious Opal?

"Precious opal" is the name used for any opal that exhibits "play-of-color". Play-of-color is the familiar flash of bright colorful light that a person sees when viewing opal. Black opal, white opal, crystal opal, boulder opal, and matrix opal are all varieties of "precious opal".

Play-of-color is an optical phenomenon that occurs when light enters an opal, interacts with its internal structure, and leaves the opal in a flash of spectral colors. A single piece of opal can have an almost unlimited number of appearances. Its appearance will constantly change: 1) as it is moved under a light source, 2) as the light source is moved, or, 3) as a person changes their angle of view.

Play-of-Color in Opal: White light enters an opal, interacts with the tiny silica spheres that make up its internal structure, is diffracted into its component colors, and exits the opal in a flash of spectral colors.

Opal is a mineraloid, an amorphous material without a crystalline structure. It is composed of tiny spheres of amorphous silica with a chemical composition of SiO2.nH2O. The tiny silica spheres are translucent to transparent and allow the passage of light.

In common opal the spheres are of various sizes and arranged in an irregular pattern. This irregular pattern scatters much of the light that enters the opal. However, in precious opal the spheres are all the same size and precisely arranged in a regular, repeating network. When the spheres in this network are exactly the right size and in exactly the right arrangement, they will diffract the passing light into its component colors. As the light exits the opal, it displays the play-of-color that gives precious opal its unique beauty.

Precious opal must be cut with much care, skill and study. Before cutting, the piece must be carefully examined to identify the location, orientation, and pattern of its play-of-color features. The goal is to produce a stone of maximum play-of-color, uniformly distributed, and in a shape that is well suited for jewelry or other use.

The best precious opal displays a full spectrum of bright colors, uniformly distributed across the face of the gem with no dead spots, and produces good play-of-color when viewed from any angle. It is extremely rare to encounter a gem that meets all of these goals. These special gems are what the miner hopes to find and the cutter hopes to render. Precious opal that meets these requirements is especially valuable. 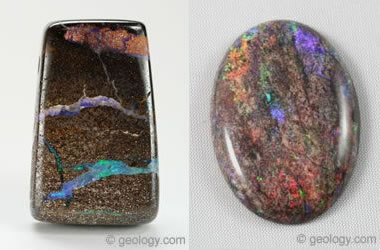 Boulder Opal and Matrix Opal: The stone on the left is a bead cut from boulder opal. The cabochon on the right is an example of matrix opal. Both of these materials were mined in Australia.

Boulder opal and matrix opal are two other categories of opal that contain the play-of-color known as "precious opal". The name "boulder opal" is used for a rough or cut gemstone that exhibits play-of-color originating from precious opal in seams and patches within the host rock.

The name "matrix opal" is used for a rough or cut opal in which the precious play-of-color is intimately mixed within the parent rock. It is often within the interstital spaces of a sedimentary host rock or within the vesicular spaces of an extrusive igneous rock. 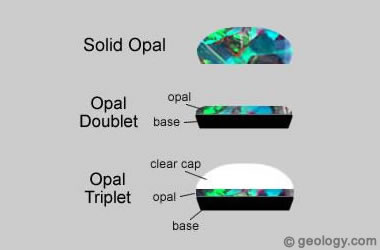 Much precious opal and some of the most spectacular material, occurs in very thin seams that are too thin to cut into full-dimension cabochons. This material can be cut into thin slices with a diamond saw and used to make beautiful inlay pieces. These flat pieces can also be ground perfectly flat and glued to thin slices of black obsidian that have also been ground perfectly smooth.

The two-part stones are then cut to pleasing outlines on a diamond wheel and polished on their tops and sides to a bright luster. At this point you have assembled stones, known as "opal doublets". The play-of-color in the thin slice of precious opal displays brightly against the contrast of the black obsidian base.

Some cutters at this point might add a cap of clear quartz and polish the stones to a bright luster. The quartz cap, done skillfully, might produce some magnification of the precious opal below and provide a cap of greater hardness that will protect the opal from abrasion and impact. The assembled stone is now known as an "opal triplet" because it consists of three parts - the obsidian base, the thin slice of precious opal, and the protective cap of quartz.

Assembled stones often have all of the beauty of solid opal. They can make a tiny piece of beautiful rough into a number of nice gems. The assembled stones sell for prices that are much more affordable than solid opal cabochons of equivalent size and beauty.