A gem that consists of precious opal within or attached to its host rock. 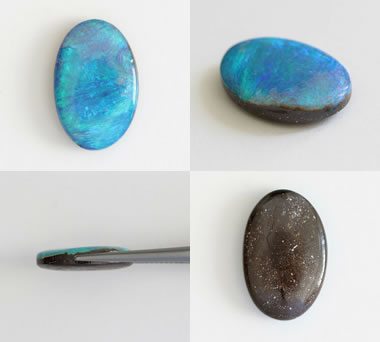 Boulder Opal: The cabochon shown in the four views above was cut from a rock that contained a very thin seam of precious opal. The cutting was skillfully planned to position the thin seam of precious opal as the face of the stone, while preserving a small amount of host rock to serve as a natural backing. The result is a gem that displays full face-up color with a beauty that exceeds or rivals most solid opals. The rough was mined in Winton, Queensland, Australia. It measures 16.89 x 10.98 x 4.19 millimeters. The stone and the photos are by Shinko Sydney.

What is Boulder Opal?

Some people also consider "boulder opal" to be an ingenious cutting style that beautifully utilizes small seams and patches of precious opal that are too small to cut into gems of solid opal. Boulder opal is also known as "Natural Opal Type 2". 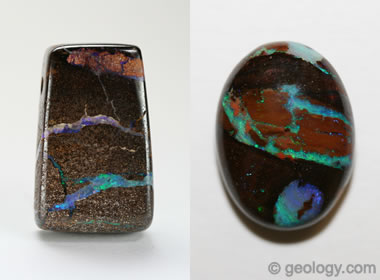 Australia is the world’s most famous source of boulder opal. Much of it is in a brown ironstone with streaks and patches of precious opal. Some forms when precious opal infills fractures, or the cavities of concretions, invertebrate fossils, and petrified wood. The stone above on the left is a boulder opal bead that displays tiny seams and patches of precious opal. The stone on the right is a cabochon cut from rough found in the Koroit Opal Field of Queensland, Australia.

The Problem and Opportunity

Much precious opal occurs as thin seams and patches within a host rock of ironstone, basalt, rhyolite, andesite, quartzite, sandstone or other material. Some precious opal also forms within the cavities of fossils, concretions, and nodules. The opal in these types of rocks is often too small to isolate and cut into a gem composed only of solid opal. It is also too beautiful and valuable to go unutilized. So the cutter decides to fashion a cabochon or a bead or a small sculpture that includes both precious opal and its natural host rock. These gems are usually cut in one of two ways: 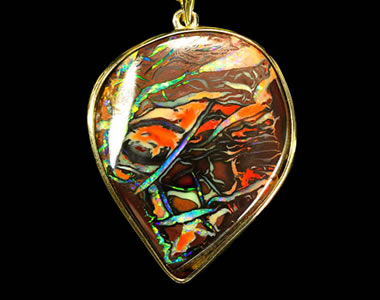 1) A gem that displays the natural seams and patches of precious opal exactly as they occur within the host rock. These gems can make an impressive display, especially when the opal contrasts sharply in color with the host rock material. Thin seams of precious opal flashing through a black background of basalt or through a brown background of ironstone makes a striking sight.

2) A gem that is oriented to display only or mostly precious opal in its face-up position, using the host rock as natural backing. This cutting method enables a thin seam of opal to be cut into a gem with full face-up color. In these stones, a very small amount of opal can be fashioned into a very beautiful and valuable gem. They can rival or exceed the beauty and value of many solid opals.

Examples of boulder opal from various parts of the world are pictured on this page. 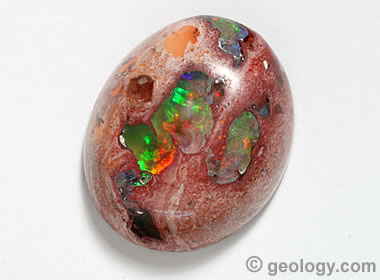 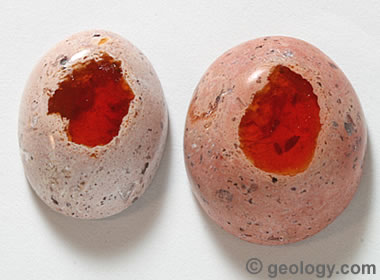 Mexico has much fire and precious opal in pink rhyolite host rocks. It is often cut into cabochons that display a patch of fire or precious opal surrounded by rhyolite. This opal is known as "cantera" but it also fits the definition of boulder opal. 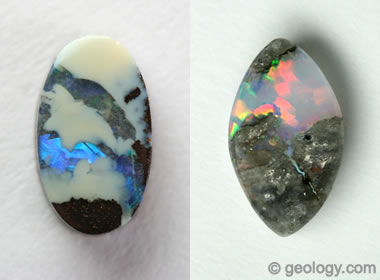 Honduras is known for its boulder opal and matrix opal found in andesite and basalt host rock. These cabochons of boulder opal show cavities and fractures filled by precious opal. They were cut from material mined in Honduras.