One of the rarest and most valuable diamond colors 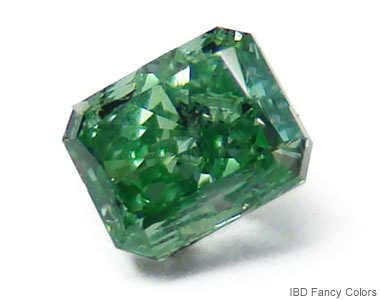 Green Diamond: This green diamond has all of the characteristics of a highly desirable colored diamond: A) it is a natural diamond; B) the green color was produced by nature; and, C) the color is a pure green with a rich saturation. The Gemological Institute of America graded its color as “Fancy Vivid green” with a natural origin and an even distribution. Image used with permission of IBD Fancy Colors LLC.

Have You Seen a Green Diamond?

Natural-color green diamonds are very rare. Of all diamonds cut into polished gems in any given year, a very small number of them will have a dominant green color. Diamonds with a natural green color are rare enough that many people have never seen one, and those who have seen one are likely to have seen it in a museum exhibit. 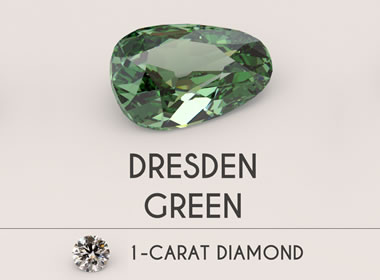 In many green diamonds, the color is confined to a thin layer at the surface of the rough stone. The design and cut of the polished diamond must be carefully planned and executed to conserve as much of that original color as possible. Even though the faceting might only preserve a band of green color around the girdle and a small amount in the culet, that can be enough to produce an apparent green color throughout the stone. These diamonds often display a green color which is very subtle.

Most green diamonds have a color that is modified by hints of yellow, blue, or gray. Variations in color, tone, and saturation can make a big difference in the selling price of the gem. The most valuable green diamonds have a pure green color, medium tone, and strong saturation. These colored diamonds might earn a color grade of "Fancy Intense" or "Fancy Vivid." Such gems are exceedingly rare and will fetch premium prices.

What Causes the Color of Green Diamonds?


A) Formation of Natural-Color Green Diamonds

Diamonds with a natural green color developed that color while they were underground, in rocks that contained small amounts of radioactive material such as uranium or thorium. As the radioactive materials decayed, they emitted radiation that penetrated the nearby diamond crystal. When this type of radiation enters a diamond, it can knock electrons or carbon atoms out of their position in the crystal lattice. This alteration most strongly influences the outer layer of the diamond crystal. As a result the green color is often present as a shallow "skin" on the outside of the diamond crystal. Diamonds with a uniform green color throughout the stone are exceptionally rare.

Green color from natural irradiation is the most common cause of green color in diamonds. However, green color can also be caused by structural defects in the diamond's crystal structure, caused by the presence of nitrogen, hydrogen or nickel atoms. [1] 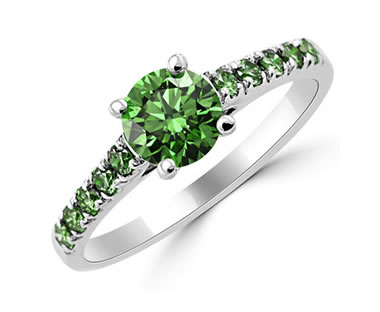 Green Diamond Ring: This ring is set with natural diamonds which have been irradiated to produce a rich green color. Image used with permission of JewelryPoint.com.

Ingenious people are always trying improve the color of gemstones to increase their value. They do this by mimicking the processes of nature or applying treatments that alter the color of the gem.

The first documented treatment to produce green diamonds was an experiment done by Antoine-Henri Becquerel, shortly after his discovery of radioactivity in 1896. He irradiated some diamonds to see if they would be altered, and their color changed to green. [2]

In 1904, Sir William Crookes stored a few polished diamonds in radioactive salts. When they were removed from the salt, the diamonds had a green color at the surface and that color extended to a shallow depth. This method of diamond treatment is not used today because the diamonds can be contaminated with radioactivity that does not decay to safe levels within a reasonable period of time. [3]

Another treatment to produce green diamonds today is to apply a thin coating of silica to the surface of the polished gems. The coating can produce an attractive appearance, but it is very thin and can eventually be worn off by the abrasion of normal wear. [4]

Diamonds that owe their green color to a treatment should always be sold with a disclosure that the color was produced by treatment, and state the method of treatment. Because so many buyers prefer diamonds with a natural color, green diamonds colored by treatment generally sell for a significantly lower price than natural green diamonds of similar color, size and quality. 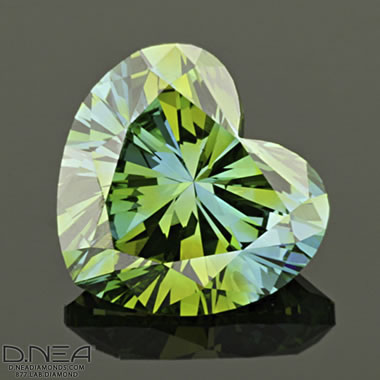 A Synthetic Diamond Treated to Produce a Fancy Deep Blue-Green Color: The blue-green synthetic diamond above had an "as-grown" Fancy Intense orange-yellow color, then post-growth irradiation and annealing treatments transformed it into a Fancy Deep blue-green color. This synthetic diamond was produced by D.NEA Diamonds. Its GIA Synthetic Diamond Report can be seen here.

Synthetic diamond crystals have been successfully grown in laboratories in a variety of colors. Synthetic diamonds with a light green color and a greenish yellow color have been produced when small amounts of nitrogen and boron were incorporated into the diamond.

Because many green diamonds obtain their color from exposure to radiation in a laboratory (a process known as irradiation), there have been concerns about their safety when used in jewelry.

All companies in the United States that apply radiation treatments to any type of gemstone must be licensed by the Nuclear Regulatory Commission. These companies must use approved methods to treat the gemstones, then store them in a secure facility until their radioactivity declines below a level that would make them safe for use in jewelry. Only then can they be released for jewelry manufacturing or sale to the public. [6]

The process of gemstone irradiation is very common. Almost all of the blue topaz offered in stores today is colorless topaz that has been irradiated and then heated to produce a blue color. "Swiss blue" and "London blue" are trade names for two of the most common varieties of treated blue topaz seen in today's market.

Gemstones have been treated by irradiation in the United States for decades with the Nuclear Regulatory Commission actively licensing companies who do the treatments. Based upon their experience the NRC reports:

The NRC has no reason to believe that wearing irradiated gemstones can be harmful. There have been no reported cases of anyone being harmed by wearing them. There is no safety reason to stop wearing blue topaz or any other irradiated gems. [6] 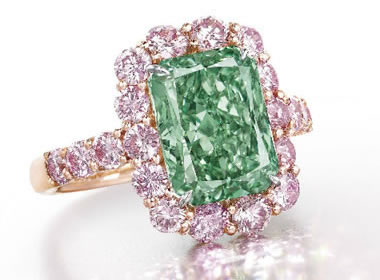 The "Aurora Green" Diamond: This ring, holding the 5.03-carat Aurora Green diamond, surrounded by circular-cut pink diamonds was sold at auction by Christie's in 2016 for $16.2 million. It holds two important distinctions: A) the highest price ever paid for a green diamond at auction; B) the largest natural-color, Fancy Vivid green diamond ever graded by the Gemological Institute of America. Photo by Christie's.

Two of the most famous and valuable natural-color green diamonds are the "Aurora Green" and the "Dresden Green."

In 2016, a ring containing the Aurora Green, a 5.03-carat, VS2 clarity, Fancy Vivid green diamond, was sold at a Christie's auction for $16.2 million. That was the highest price ever paid for a green diamond at public auction. [7]

Prior to the auction, gemologists at the Gemological Institute of America graded the Aurora Green and reported that it was the largest Fancy Vivid green diamond with a natural color that they had ever graded as of January 20, 2016. [8]

The first known record of the Dresden Green is from a 1772 article in a London newspaper. The date of this article corresponds to a time when a number of green diamonds with uniform color were mined in Brazil and brought to Europe.

Most natural-color green diamonds have a color that is only "skin deep." This prevents many of them from being cut into faceted gems that retain a distinct green color. Diamonds with a green color that is evenly distributed through the stone are exceptionally rare.

When the green color is confined to a thin layer just below the natural surface of the rough, the shape of the finished diamond must be carefully planned to preserve as much green color as possible. Often the diamond is cut to preserve green color around the girdle of the stone or sometimes to preserve color in the culet. With a small volume of color to start and sometimes only a portion of it remaining, these green diamonds are a special challenge to cut and often have a low color saturation.

Anyone who contemplates spending significant money on a green diamond should purchase the diamond from a business that has a reputation for selling colored diamonds. In addition, the diamond and the cause of its color should be evaluated by a trusted laboratory. Two questions are important: 1) is the diamond natural or synthetic; and, 2) is the green color a result of natural processes or treatment by people?

When Christie’s sold the Aurora Green, it was submitted for identification and grading to the Gemological Institute of America. The colored diamond grading report prepared by GIA stated the origin and color of the Aurora Green as “natural, Fancy Vivid green, with an even distribution.” [9]

A grading report from a diamond authority such as GIA can support the confidence and comfort of both buyer and seller. The cost to obtain a lab report from a reputable lab is a tiny fraction of the cost of a nice diamond, making it an excellent investment and insurance policy at the same time.