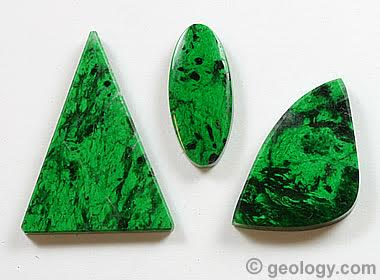 Maw Sit Sit: A group of maw sit sit cabochons showing the typical bright chrome-green color and interesting black pattern. In cabochons, the black kosmochlor often has a much brighter luster than other parts of the stone.

What is Maw Sit Sit?

Maw sit sit is a green and black gem material that has been confused with jade for hundreds of years. It was once thought to be a variety of jade because of its similar appearance and physical properties. It was often referred to as "chrome jade" because of its bright chrome-green color.

Maw sit sit is not a jade. Instead, it is a metamorphic rock composed mainly of kosmochlor, clinochlore, chromian jadeite, and albite, with small amounts of eckermannite, chromite and other minerals.

Kosmochlor (NaCrSi2O6) is a rare sodium chromium pyroxene mineral that is abundant in some meteorites. It forms the jet-black areas in many polished specimens of maw sit sit and often has a brighter luster than the rest of the material. Chromium-rich jadeite and clinochlore are the main source of maw sit sit’s bright green color. Clinochlore is a magnesium-rich member of the chlorite mineral group. Albite is a common feldspar mineral. Eckermannite is a rare amphibole-group mineral. Jadeite's composition (NaAlSi2O6) is similar to the composition of kosmochlor, and the two minerals form a solid-solution series with chromium substituting for aluminum. 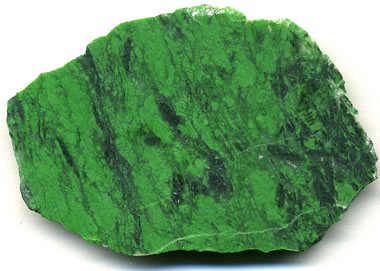 Most opaque gemstones that are rocks, composed of multiple minerals, have a highly variable appearance. The typical gem cut from maw sit sit is a bright chrome-green cabochon with a few swirls of jet-black color. The quality of the green color and a slight, yet interesting swirl of black are what determines its appeal to the buyer.

Maw Sit Sit is extremely tough and resists breaks and chips. It has a Mohs hardness of about 6 to 6 1/2, which is slightly less than optimal for use in a ring or bracelet. The material is usually opaque, but some specimens are translucent.

Where is Maw Sit Sit Found?

To date, all known maw sit sit deposits are in a small area of Kachin State of northern Myanmar (formerly known as Burma). The gem material receives its name from the village of Maw Sit Sit, located in the foothills of the Himalaya Mountains.

There, maw sit sit occurs, along with jade, in veins associated with a large peridotite body that has been heavily metamorphosed. It also occurs as pebbles, cobbles, and boulders in streams and alluvial deposits. Much of the mining is in these alluvial deposits.

Nice pieces of maw sit sit are much more affordable than high-quality jade. A beautiful cabochon sized for a ring or a pair of matched cabochons suitable for earrings often cost under $100. Maw sit sit is also a nice stone for pendants and men's rings and cuff links.

The problem that you will have if you like maw sit sit is finding a store that has it for sale. You will even have difficulty finding a store where anyone on the staff knows anything about it.

Maw sit sit is a little-known gem material. It is easier to find online, but be careful because fakes, misidentified materials, and imitations are abundant. Buy from dealers that you trust.