The black and white ornamental stone and gemstone. 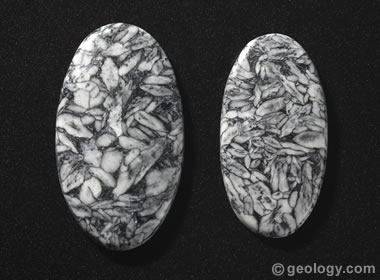 Pinolith Cabochons: These cabochons nicely display the black-and-white "pine nut" pattern that is characteristic of the material. The cab on the left measures 56 x 31 millimeters, and the cab on the right measures 50 x 26 millimeters.

Pinolith, also known as pinolite, is a black and white metamorphic rock composed of dolomite, magnesite, and graphite. It is a graphite-pigmented dolomitic marble [1] that contains small (mostly 5 to 15 millimeter) lath-shaped crystals of white to yellowish brown magnesite. Pinolith is used as an ornamental stone and as a gemstone. 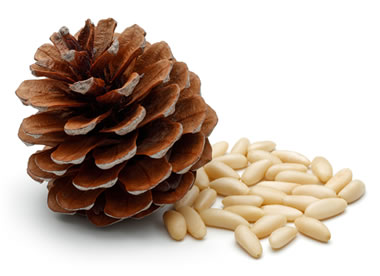 The magnesite crystals in pinolith are shaped like pine nuts from the European stone pine tree (Pinus pinea). Pine nuts are small edible seeds from pine trees common to Europe and Asia. They are added to bread, salad, and meat or vegetable dishes. Additionally, the suffix -lith is from the Greek word lithos, or "stone". That is where the name "pinolith" is from.

Pinolith is a rare material found at a small number of deposits in Austria and northeastern Spain. The most famous locality is at a magnesite deposit in the eastern Alps, near the community of Hohentauern, Austria.

There, metasomatism (a change in the composition of a body of rock caused by the intrusion of hot, reactive fluids) transformed limestones into magnesite and dolomite. Small amounts of pinolith and metallic ore minerals are present in these rocks. 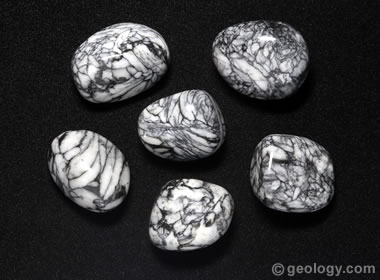 Tumbled Pinolith: Six tumbled stones made from pinolith. They show the typical color and "pine nut" pattern of this stone. Stones are about 3/4 inch across.

Pinolith requires a lot of skill to cut because it can be fragile and contains materials of varying hardness and texture. Most pinolith has a Mohs hardness of only 4 to 4.5. Some is silicified and can have a hardness of up to Mohs 6 to 7.

Pinolith should be treated as a fragile stone. The magnesite crystals can easily cleave, and the rock is often soft and vulnerable to abrasion. It should be mounted in a protective setting and worn gently, or, it should be used in items such as pendants, pins and small sculptures that will not be subjected to abrasion and wear. 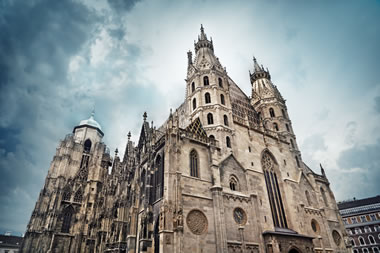 St. Stephens Cathedral, also known as Stephansdom, in Vienna. Pinolith was reportedly ordered for use in the construction of St. Stephen's Cathedral in 1641. Image copyright iStockphoto / MahirAtes.

Pinolith as an Ornamental Stone

Millions of tons of magnesite rock, including pinolith, from the Austrian deposits were used by the early iron and steel industry of Europe during the 1800s and 1900s.

Crushed stone from these deposits was also used in highways, railroad beds, and building construction.

During all of this mining, a small amount of pinolith was encountered. Pinolith was produced from isolated discoveries or as a byproduct of mining magnesite.