The same hardness, but much tougher than other varieties of diamond. 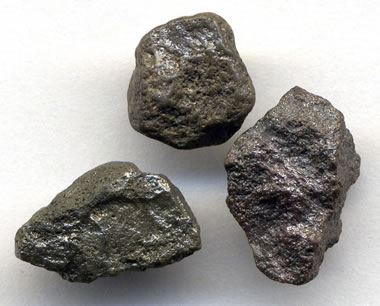 Carbonado Diamonds are usually black or gray in color and irregular in shape. Upon close examination, their porous texture is usually obvious. They typically exhibit a luster that might be perceived as glassy, submetallic, or adamantine. Creative Commons image by James St. John. [2] Click to enlarge.

What Are Carbonado Diamonds?

Carbonado diamonds are a rare and unusual variety of industrial diamond. They are composed almost entirely of microcrystalline diamonds in random crystallographic orientations.

When found in the field, they look nothing like any other type of diamond. They are dark, opaque, porous, and often display a subtle luster. They were first recognized as a type of diamond in 1841 by Portuguese prospectors in Brazil who called them “carbonado” because they look like tiny pieces of charcoal. [1]

The Value of Carbonado in Cutting

Carbonado diamonds are superior to other types of industrial diamond in many cutting and grinding applications. When abrasive granules of monocrystalline diamond break or cleave in the high-stress environment of cutting and grinding, the fracture or cleavage often travels completely through the diamond granule.

However, because granules of carbonado are composed of a large number of interlocking microcrystals of diamond, many breaks and cleaves will stop at a crystal boundary instead of propagating completely through the granule.

The name "black diamond" is sometimes used for carbonado, however that name should be reserved for diamonds with a black body color often caused by clouds of tiny black inclusions or by carbonization of fracture surfaces.

Cutting tools made with carbonado diamond last longer and require less maintenance. Carbonado was recognized as a super abrasive in the 1800s and was more highly valued for its cutting and grinding effectiveness over other varieties of diamond. The problem with carbonado is its rarity. It is only found in two countries, and total worldwide production has only been a few tons of material. Carbonado is not an important commodity in today's abrasive market.

It is interesting to note that in the late 1800s, when De Beers was developing their diamond mines in South Africa, that they preferred carbonado over their own diamonds for diamond drilling. Gardner F. Williams, General Manager of De Beers Consolidated Mines, Ltd. lamented: "Round or shot boart is found in the mines at Kimberley and is very valuable for use in diamond drilling since the Brazilian carbonado has become so scarce." [3]

Where Is Carbonado Found?

Carbonado is found in just two areas worldwide. It is found in the Tombodor conglomerate and derived sediments in the state of Bahia in eastern Brazil. [1] It is also found in the Bangui Region in southwest Central African Republic, where carbonado weathers from clastic sedimentary rocks of the Carnot Formation. [2] The two locations are on opposite sides of the Atlantic Ocean near where these continents might have once been connected. It is possible that these two areas of carbonado occurrence share a common origin.

All carbonado that has ever been found has occurred as detrital grains in sediments and clastic sedimentary rocks. The grains are almost always less than 1 centimeter in diameter and many grains are one millimeter or less. Carbonado has never been found in kimberlite, lamproite, or any other rock type associated with the formation of diamond. For this reason, little direct evidence has been found about how carbonado forms.

How Does Carbonado Form?

The origin of carbonado diamond is poorly understood. A number of hypotheses have been advanced by a variety of researchers, but none of them have obtained wide acceptance. A generalized list of the hypothetical processes is given below.

(E) Formation in space, then a delivery to Earth

Stephen Haggerty gives a short description of each process in a Gems & Gemology article. [1]

Many properties of carbonado are determined by its occurrence as a microcrystalline aggregate. As a result it does not show the familiar octahedral, cubic or dodecahedral crystal forms displayed by other varieties of diamond. Crystal forms are hidden within the microcrystalline aggregate. The crystals are also interlocking and in random crystallographic orientations, so cleavage and a uniform hardness throughout the specimen is not observed. Carbonado might also have a pitted surface and an internal porosity of up to ten percent or more. These properties are unexpected for any type of diamond.

If carbonado is used as a scratching or cutting tool, the hardest microcrystal in contact with the object being scratched or cut will determine the effective hardness of the carbonado. As a result, carbonado can be tougher and have a higher apparent hardness when compared with single-crystal diamond abrasives.